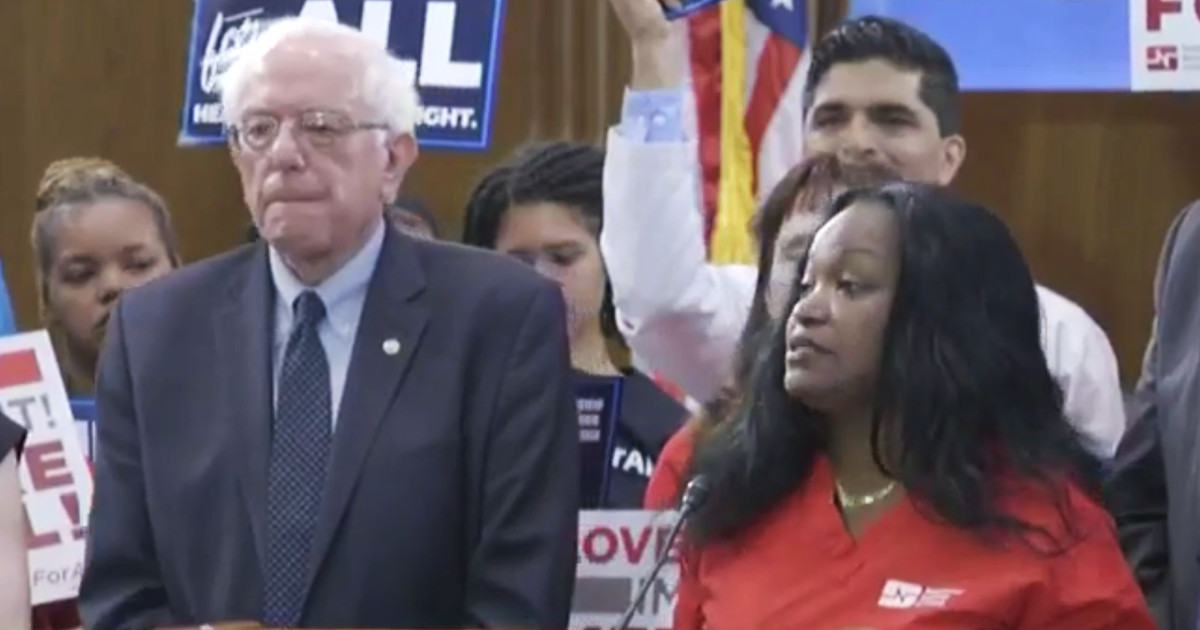 “The American people want, and we are going to deliver, a Medicare for All, single-payer system,” said Sanders, echoing long-held UE policy.

“This is a struggle for the heart and soul of who we are as American people,” Sanders said, pointing out that “this struggle will be opposed by some of the most powerful forces in the United States: the insurance companies, the drug companies, and everyone who profits off of the current system.” He noted that the top five health insurance companies raked in $20 billion in profits last year, and paid their CEOs $1.7 billion.

Joining Sanders at the bill introduction was cardiac care nurse Renelsa Caudill, a rank-and-file member of UE's close ally National Nurses United. She told two stories of how patients of hers had been directly harmed by the for-profit healthcare “system”:

I recently had a patient who had been unemployed for 9 months. He lost his health insurance when he lost his job. By the time he got a new job and had health insurance, his heart had begun to fail. This patient is experiencing new onset heart failure, that would have been prevented if he had gotten the care he needed.

I had a patient who was prepped for a CT scan for serious heart problems. In the middle of the procedure, we received a call telling us that we did not have authorization because the insurance company would not pay for it.

“The way to stop this is by passing Medicare for All,” Caudill declared, “and I’m here to tell you that nurses across this country are going to fight for it!”

Disability rights activist Nicole LeBlanc explained why people with disabilities have been on the front lines of fighting attacks on healthcare, because both “our healthcare and freedom are at risk.” She praised Sanders' bill for including provisions for long-term care because, as she pointed out, “if we live long enough, we all join the disability club.”

In an op-ed published in The Hill a few days before Sanders introduced his bill, NNU Executive Director Bonnie Castillo, who spoke to UE’s 2017 convention, argued that "strong Medicare for All legislation is like bargaining a strong union contract." She defended working people's right to demand strong policy solutions to the problems we face:

[U]nion workers and other everyday people should shape the policy that impacts their lives. Without working people at the table, policy becomes less about addressing what’s good for public health and safety, and more about appeasing corporate apologists who constantly champion “being realistic” over being safe, moral, or just.

Explaining why NNU pushed Jayapal (and Sanders) to introduce the strongest possible Medicare for All legislation, Castillo points out that unions like NNU and UE never go into negotiations with “watered-down demands” — and that we must do the same in the political arena.

“We must demand what we actually need,” Castillo continues, “because if human lives are at stake based on contract demands in any given hospital, imagine how many millions of lives are at stake with legislation governing the delivery of health care in this entire country?”

UE General President Peter Knowlton, commenting on the introduction of the House bill in February, stated that “Medicare for All will take healthcare off the bargaining table and guarantee quality care to every person in the United States. It is the embodiment of UE and working-class values of taking care of each other, and I urge all UE locals, members, and allies to join the movement to pass this crucial piece of legislation.”