What is the “Green New Deal”? 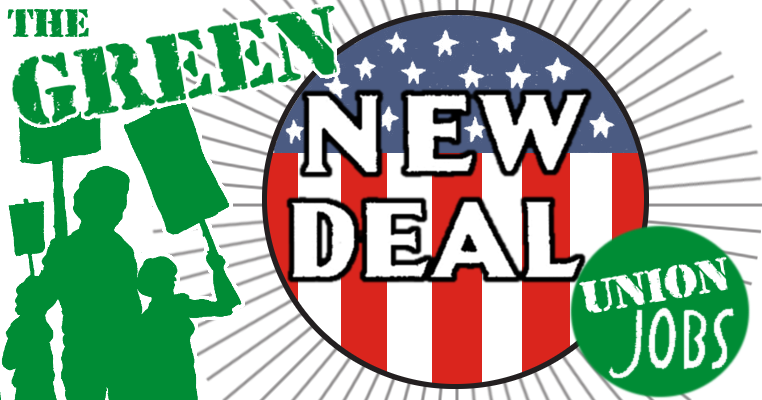 Since the 2018 midterm elections, the “Green New Deal” — a comprehensive approach to addressing climate change that would create millions of new jobs — has gained both visibility and popularity, as well as a certain amount of controversy.

Like the original New Deal in the 1930s, the Green New Deal is not a single piece of legislation. The federal resolution introduced in February sets out the goal of meeting 100 percent of the country’s energy needs from renewable sources in the next decade, and commits to using the transition to create good, union jobs. Even if passed, additional pieces of legislation will be needed to implement these goals.

The original New Deal helped our country recover from the Great Depression, facilitated the establishment of the industrial unions (including UE) that brought a decent standard of life to tens of millions of working-class people, and positioned our economy to be able to transition to defeating Nazism and fascism in World War II. With the right leadership — including from unions like UE — the Green New Deal can likewise revitalize working-class communities, create millions of good-paying union jobs, and facilitate the kind of industrial transformation necessary to address climate change.

The UE policy resolution “Protect Our Environment for Future Generations” notes, “The science [on climate change] is unquestionable: 97 percent of peer-reviewed scientific literature affirms that human activity is causing global warming. Global warming is causing stronger storms, more flooding, longer heat waves, crop damage, and sea level rise.” The resolution continues, “[b]asing our nation’s economy on energy efficiency and sustainable energy not only protects our planet, but has the potential to create millions of well-paying jobs, in industries that many UE members already work in.”

Labor and the Green New Deal

In March, the presidents of two AFL-CIO unions wrote a widely-publicized letter on behalf of the AFL-CIO’s Energy Committee expressing skepticism about the Green New Deal. Senator John Barrasso (R-Wyoming) — whose lifetime score on the AFL-CIO’s legislative scorecard is a miserable 11% — used this letter to claim on Twitter that the entire federation was “slamming” the Green New Deal.

What the letter actually calls for is that “the voices of American workers be included in the discussion” of climate change solutions, something that many Green New Deal organizers have, in fact, been doing, and many unions have come out in full support of the Green New Deal. On April 16, the Maine AFL-CIO announced its support for state-level Green New Deal legislation. The lead sponsor of the legislation, state Rep. Chloe Maxmin (D), told Think Progress that “from the very first conversation that we had… labor was involved.”

One of the co-authors of the letter was the international president of the International Brotherhood of Electrical Workers, but many IBEW locals in fact support the Green New Deal. Lou Antonellis, the business manager for IBEW Local 103 in Massachusetts, told the Dorchester Reporter that members of the local are “going to work on solar panel jobs, putting up wind farms, working on the crumbling infrastructure … We’ve been championing this stuff for a long time.”

In December, Joe Uehlein, the former secretary-treasurer of the AFL-CIO’s Industrial Union Department, and author Jeremy Brecher wrote in “12 Reasons Labor Should Demand a Green New Deal” that “Labor shouldn’t just back the Green New Deal, it should help lead the way.” They explain, “The [original] New Deal put millions of people to work and created a new policy framework for American democracy. ... While current proposals for a Green New Deal align with workers’ interests, organized labor brings traditions and insights that can make them even more compelling.”

Uehlein and Brecher go on to point out that

Incorporating worker demands in the Green New Deal program will pay benefits long before they can be implemented at a national level. It will ensure that labor’s approach is understood and adopted by a wide coalition. And it will provide guidelines for what policies that coalition will fight for at a local, state, regional and industry level.

During the recent strike by members of UE Locals 506 and 618 in Erie, PA, the policy research center Jobs to Move America noted on Twitter that the “growing support for a nationwide transition to clean, renewable energy ... will necessarily involve heavy investment in manufacturing and transit, which will create millions of jobs like the ones Wabtec workers are doing now.” Therefore, they concluded, “if we’re serious about a #GreenNewDeal, we need to be serious about solidarity with Wabtec workers. And manufacturers need to get serious about high-road standards + job quality. We can’t let corporations race to the bottom. That's not what a just transition looks like.”

Workers’ Rights and Democracy in the Green New Deal

Democratic, rank-and-file unions like UE and our partners in the North American Solidarity Project are uniquely positioned to lead efforts to define and win Green New Deal policies.

UE members know that working people don’t just need jobs, we need good, union jobs, with livable wages, decent benefits, and the right to have a say in both our workplaces and our unions.

By getting involved with and leading campaigns for Green New Deal policies, UE members can ensure that they include provisions for union recognition, livable wages and good benefits for the workers who will carry them out. We can also follow in the footsteps of UE members who before, during and after World War II demanded that workers and working-class communities have a democratic voice in decisions about wartime and post-war conversion.

One of the most ambitious proposals for the Green New Deal is a proposal for a Great Lakes Authority put forward by the Detroit chapter of the Democratic Socialists of America. This proposal draws inspiration from the 1944-45 campaign by UE District 8 for a Missouri Valley Authority, which would have created a democratic, worker- and environmentally-friendly plan for postwar economic conversion.

The Great Lakes Authority would be a regional planning authority charged with directing investment towards green manufacturing, green housing and green infrastructure in the region. It would provide union jobs for the skilled manufacturing workforces in places like Milwaukee, Chicago, Detroit and Erie, PA, and utilize their skills to address the climate change crisis. Government investment would be used as leverage to ensure that companies recognize and bargain with workers’ unions.

(For more on the history of UE District 8 and their campaigns for democratic conversion and a Missouri Valley Authority, see the Summer 2018 UE NEWS Feature “The Fight for Good Jobs and a Democratic Economy” or historian Rosemary Feurer’s 2006 book Radical Unionism in the Midwest, 1900-1950.)

“But How Would You Pay for It?”

Although the idea of a Green New Deal (and even the term) has been around for over a decade, it gained new traction when newly-elected Congresswoman Alexandria Ocasio-Cortez joined a sit-in demonstration in House Speaker Nancy Pelosi’s office in November.

Ocasio-Cortez made headlines again in January when she suggested that a Green New Deal could be paid for by increasing the top marginal tax rate on incomes of over $10 million to 70 percent — the rate that was in place until 1980. While ridiculed by corporate politicians of both parties (whose campaigns are mostly paid for by wealthy people), a poll conducted in January found that this idea is supported by 59 percent of all Americans.

Marginal tax rates are paid only on income over a certain threshold so few if any UE members would see their taxes go up under Ocasio-Cortez’s proposal. An individual earning $10,000,001, for example, would only pay the 70 percent rate on $1 — the first $10 million would be taxed at the existing, lower rates. For comparison, the top marginal tax rate during the Eisenhower administration in the 1950s was 91 percent.

UE Action for Jobs and the Climate

UE leaders will be joining our North American Solidarity Project partners in May to further develop proposals for worker-friendly Green New Deal policies. UE will also be organizing a small delegation to the Labor Network for Sustainability Labor Convergence in Chicago at the end of June, and there will be a workshop on climate and the Green New Deal at UE’s 76th convention in Pittsburgh in August. Stay tuned to ueunion.org and UE social media for more coverage of the fight for jobs and the environment.