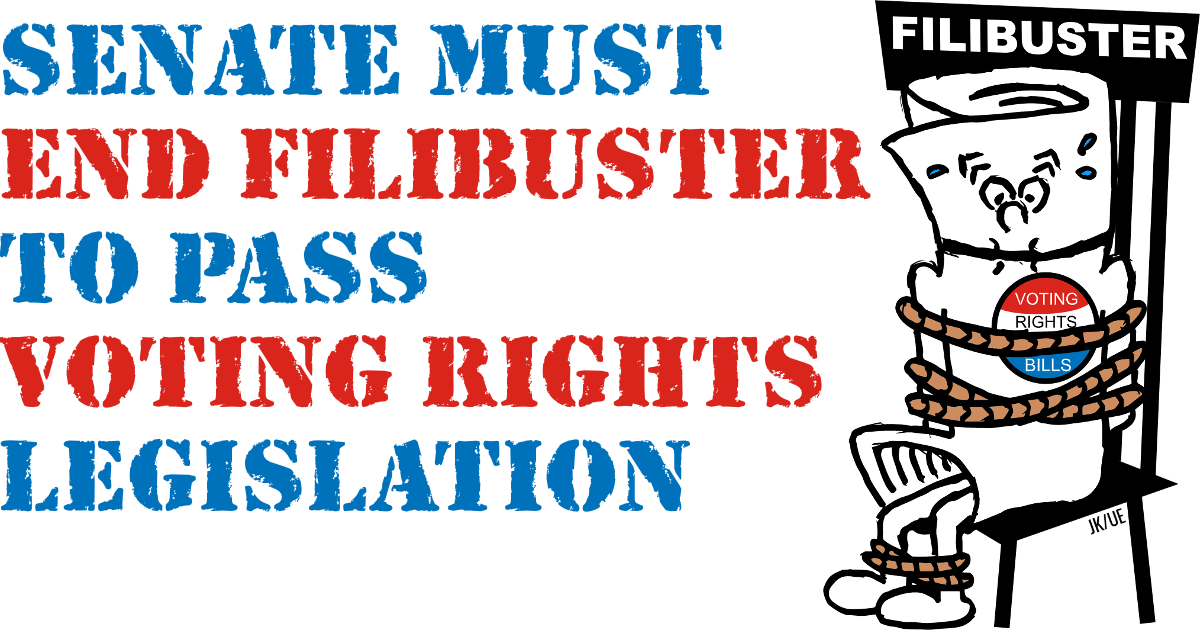 Our country’s democracy is facing the greatest threat in over half a century, as voter suppression, gerrymandering, and the flood of dark money in politics make it increasingly difficult for working people to have a voice in our government. If Democrats in Congress do not act swiftly and firmly by immediately passing the Freedom to Vote Act and the John R. Lewis Voting Rights Advancement Act — and if President Biden does not provide bold leadership to this effort — the ability of working people to fend off corporate attacks in the political arena will be severely damaged for generations to come.

Perhaps even more dangerous to the long-term health of our democracy is the practice known as “gerrymandering” — when state legislatures create legislative districts designed to favor one party over another. In states such as Ohio and North Carolina, where voters are roughly evenly split between Democrats and Republicans, gerrymandering by the Republican-controlled state legislature has produced Congressional delegations that are overwhelmingly Republican: 12-4 in the case of Ohio, and 8-5 in the case of North Carolina. Pennsylvania was in a similar situation until the elected state supreme court mandated a redrawing of gerrymandered districts in 2018 — and the state’s congressional delegation is now evenly divided between Democrats and Republicans, reflecting the voters of the state.

Increasingly, Democratic state legislatures have been responding with their own gerrymandering schemes where they can, claiming that they are forced to do it in order to compete with Republicans. Regardless of which party is doing it, gerrymandering is terrible for democracy, encourages corruption, and strengthens corporate influence on government. As we noted in a statement issued in October of 2020, “Corporations and the wealthy already are able to buy influence on government policy. One of the few counterbalances to this is the fact that politicians have to face the mass of voters every two, four or six years.” An incumbent who is virtually assured of reelection because of how their district is drawn has little incentive to respond to pressure from constituents, and every incentive to enrich themselves at the people’s expense.

The threat that gerrymandering and the one-party rule that results poses to working people is clear if we look at Wisconsin, where the gerrymandering of state legislative districts is so extreme that in 2018 Republicans gained a 63-36 supermajority in the statehouse despite losing the popular vote across the state by a 54-45 margin. Protected from the will of their constituents, the state legislature has passed a variety of anti-worker bills, including revoking collective bargaining rights for public-sector workers and imposing “right to work” on the private sector.

In January, sweeping legislation to address this crisis, the For the People Act, passed the House but was stymied in the Senate by the Republican minority, using the filibuster. The Freedom to Vote Act and the John R. Lewis Voting Rights Advancement Act were crafted in an attempt to win bipartisan support, but Republicans have so far been intransigent in their opposition. In order to protect democracy, the Democratic majority in the Senate will need to suspend the filibuster.

The filibuster is a fundamentally undemocratic institution, created in no small part to preserve the institution of slavery, and frequently used in the 20th century to defend Jim Crow segregation. While there may be some merit in allowing significant minorities to veto certain kinds of legislation, they should not be allowed to exercise a veto over the very principles of democracy — that is the road to tyranny.

All working people, regardless of political beliefs, have a stake in a fair democratic system. If something is not done very soon, it will be virtually impossible for the 2022 midterm elections to be held in an open and democratic manner. We demand that Democrats in Congress immediately pass the Freedom to Vote Act and the John R. Lewis Voting Rights Advancement Act, suspending or, preferably, abolishing the filibuster in order to do so, and we urge all working people to put as much pressure as possible on their Senators to take this course of action.