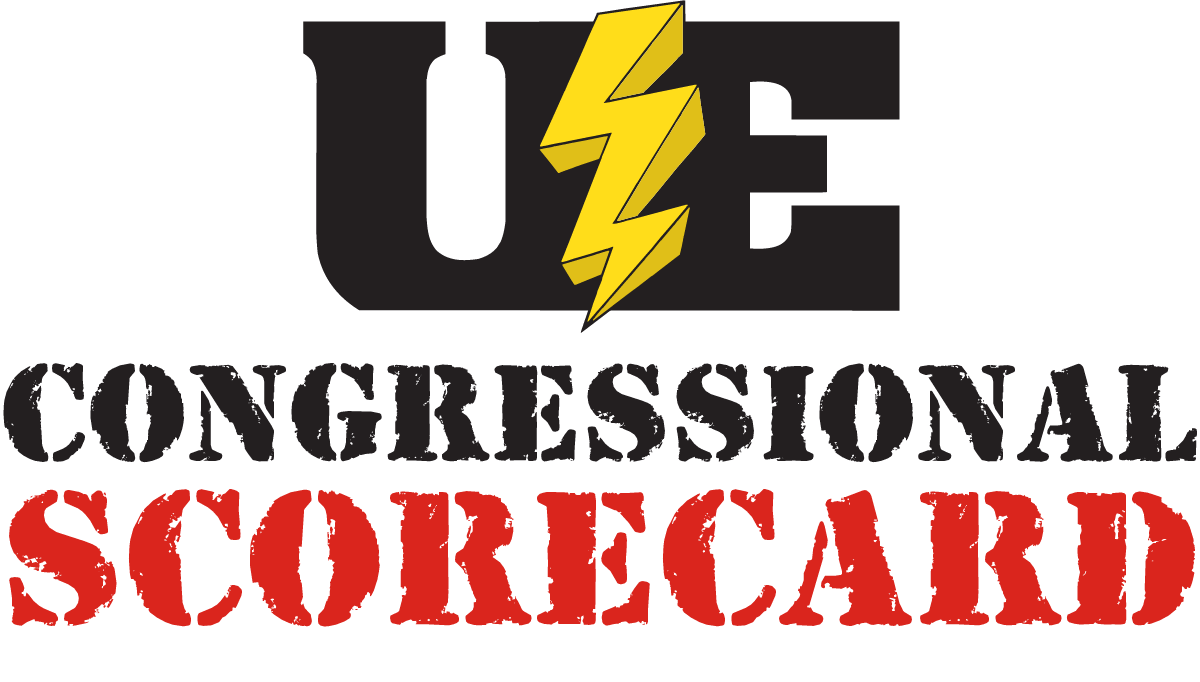 The UE Congressional Scorecard is back!

Find out how your representatives did!

The current 117th Congress got off to a hopeful start, as Democrats used their razor-thin majority to pass the American Rescue Plan Act in March of 2021, which provided $2 trillion in assistance directly to working people and state and local governments and was crucial in lifting the economy out of the pandemic-induced downturn. And in August of this year they passed the Inflation Reduction Act, which makes significant investments in clean energy and energy efficiency, begins the process of allowing Medicare to negotiate for lower drug prices, and imposes a 15 percent minimum tax on corporations.

For most of the last two years, however, the intransigence of Congressional Republicans and a handful of corporate Democrats has produced a stalemate, and as a result Congress has taken no action on any of the issues affecting working people, from healthcare and workers’ rights to voting rights and the climate crisis. Most of the provisions of the American Rescue Plan Act have expired, and the Inflation Reduction Act is nowhere near sufficient to address inflation and its effects on working people, let alone address the looming climate crisis.

In fact, thanks to the timidity of the Democratic leadership, very few issues have even been brought to a vote during this Congress — which is why for many of the issues on this scorecard we have had to rely on whether members of Congress signed on as co-sponsors of proposed bills, rather than actual votes.

To score the members of the 117th Congress, we rated them based on UE policy, which is debated and adopted by rank-and-file delegates at UE conventions. Current policy is based on resolutions passed by the 77th UE Convention, held in September 2021, and attended by over 100 delegates from UE locals across the country.

For each of eight key issues (workers’ rights, healthcare, immigrants’ rights, voting rights, criminal justice reform, women’s rights, out-of-control defense spending, and public education), we identified a bill or vote that determines whether that lawmaker has the political courage to stand for what’s right, not merely go along with the dictates of the corporate leadership of their party.

To find out how well your representatives represented working people, visit scorecard.ueunion.org and enter your address. The website will use that information to look up your Member of Congress and your state’s two Senators, and will give you their score, as well as how they did on each individual issue. For bills which were brought to a vote, a checkmark indicates a correct vote; for bills that have not been brought to a vote, a checkmark indicates co-sponsorship.

Reflecting the almost complete capture of the Republican party by corporate forces, virtually every Republican Member of Congress received a zero rating this year. However, Democrats got in on the anti-worker action as well, with Senator Joe Manchin (D-WV) coming in at zero and Senator Kyrsten Sinema (D-AZ) scoring a measly 12 percent.

These results reaffirm the wisdom of UE policy on independent political action: “We need to continue to fight and organize independently from both major political parties and unite all workers around our class interests as workers and build more working-class politics.”

Here Are the Bills and Votes Used to Rate Your Lawmakers:

For decades, working people have faced immense obstacles when they seek justice on the job. As the UE Policy “Labor Law Reform” notes, “Today, employers brazenly violate the law and victimize working people who dare to challenge their complete control. Almost 10 percent of workers who engage in organizing are fired by their employers, amounting to tens of thousands every year. In 92 percent of union organizing campaigns, workers are subjected to the psychological warfare of captive audience meetings, such as we saw in UE’s recent campaign at Refresco. Of those workplaces which successfully manage to organize in spite of employer-run terror campaigns, only half will obtain a first union contract.”

The PRO Act (H.R. 842 / S. 420), which would address many of these abuses, passed the House in March of 2021, but the threat of Republican filibuster, as well as the lack of support from a handful of Democrats, means that it has not been brought to a vote in the Senate.

Our health care system fails to provide quality care to every U.S. resident and wastes hundreds of billions of dollars a year in unnecessary administrative costs. The COVID-19 pandemic has only further highlighted the need to completely overhaul U.S. health care. A Medicare for All single-payer system — supported by UE since 1943 — would expand and improve the cost-effective and administratively efficient Medicare program to finance comprehensive, high-quality health care for everybody in the U.S. (See UE Policy, “Medicare for All”)

The UE Policy “Stand Up for the Rights of Immigrant Workers” states that “Denying immigrant workers decent wages and conditions undermines the wages and conditions of all. All workers, regardless of immigration status, must have the right to form unions, to file complaints against unfair treatment without fear of reprisal, to receive unemployment, disability and workers’ compensation benefits, and to have access for themselves and their families to affordable housing, healthcare, education and transportation.”

The policy further observes that in recent years, treatment of immigrants and those seeking asylum has become shockingly inhumane, from “placing new arrivals into literal concentration camps to turning immigration judicial proceedings into kangaroo courts where individuals had no hope of prevailing.”

The Senate bill Dignity for Detained Immigrants Act of 2021 (S. 1186) would correct some of the worst abuses of the current system, while the New Way Forward Act (H.R. 536), introduced into the House by longtime UE ally Cong. Chuy García, goes further in rolling back harmful immigration laws that result in racial profiling, disproportionate incarceration, deportation, and separation of immigrant families and communities of color.

The right to vote is fundamental to the practice of democracy, but is under more threat now than in the past half-century. UE Policy on “Independent Rank and File Political Action” identifies one of the key threats: “Having convinced a significant part of their base that the democratic process is not legitimate if it results in Democrats being elected, Republican-controlled state legislatures have been busy passing legislation designed to suppress the votes of working-class people and people of color.”

Legislation to protect the right to vote (H.R. 5746) passed the House but died in the Senate, as Democrats failed to muster enough votes to suspend the filibuster in order to pass it.

As the UE Policy “Fight Racism” points out, the criminal justice system in the U.S. is desperately in need of reform. “People of color, especially African Americans, are more likely to be stopped by police, searched, arrested, and become the victims of police and vigilante violence. The murder of countless people of color by police is outrageous. This is not merely the result of individual racist police officers but of a widespread, systematic disrespect for the lives of Blacks and other people of color.”

With the rushed-through confirmation of right-wing justice Amy Conan Barrett at the very end of 2020, it is no surprise that the Supreme Court stripped women of their right to choose to terminate a pregnancy in June of this year, overturning 50 years of settled legal precedent. UE policy “The Battle for Equal Women’s Rights” supports “the right of all those seeking reproductive healthcare, regardless of economic status, to choose whether to continue or terminate a pregnancy, to have access to free, confidential, and effective birth control and family planning services, to be protected against forced sterilization, and not be discriminated against because of reproductive health issues.”

With the writing on the wall for women’s constitutional right to control their own bodies, the House passed the Women’s Health Protection Act of 2021 (H.R. 3755) in September of 2021, which would establish federal legislative protections for women’s right to choose to terminate a pregnancy. In February of 2022, the bill died in the Senate, as Democrats failed to muster enough votes to suspend the filibuster in order to pass it.

The UE Policy “For Jobs, Peace and a Pro-Worker Foreign Policy” notes that “The U.S. military budget — at over $750 billion, larger than those of the next ten nations combined — continues to soar out of control with bipartisan support. Threats or use of military force are still a regular feature of U.S. foreign policy, under presidents of both major parties. All of this is done at the expense of the needs of working people in the U.S. and throughout the world.”

In June, Representatives Barbara Lee (D-CA) and Mark Pocan (D-WI) introduced the People Over Pentagon Act of 2022 (H.R. 8040), which would redirect $100 billion from the Defense budget to meet basic human needs like housing and healthcare. Last November, longtime UE ally Senator Bernie Sanders (I-VT) offered an amendment to the 2022 military budget bill (S.Amdt. 4534) to reduce overall defense spending (other than spending on military personnel and healthcare) by 14 percent.

Public education is, as UE Policy “Stop the Dismantling of Public Education” says, “one of the most fundamental cornerstones of a democratic society,” and significant numbers of UE members work in both K-12 and higher public education. For decades, both political parties have attacked the very concept of public education by promoting charter schools, vouchers and other privatization schemes, starving public schools, and defunding public higher education.

The wave of teacher strikes over the last ten years and the popularity of Bernie Sanders’ promise to make higher education available to all in the 2016 and 2020 presidential campaigns have turned the tide, and working people have the opportunity to go on the offensive on this issue. The College for All Act (H.R. 2730 / S. 1288) would provide free tuition for virtually all working-class students who wish to attend college.