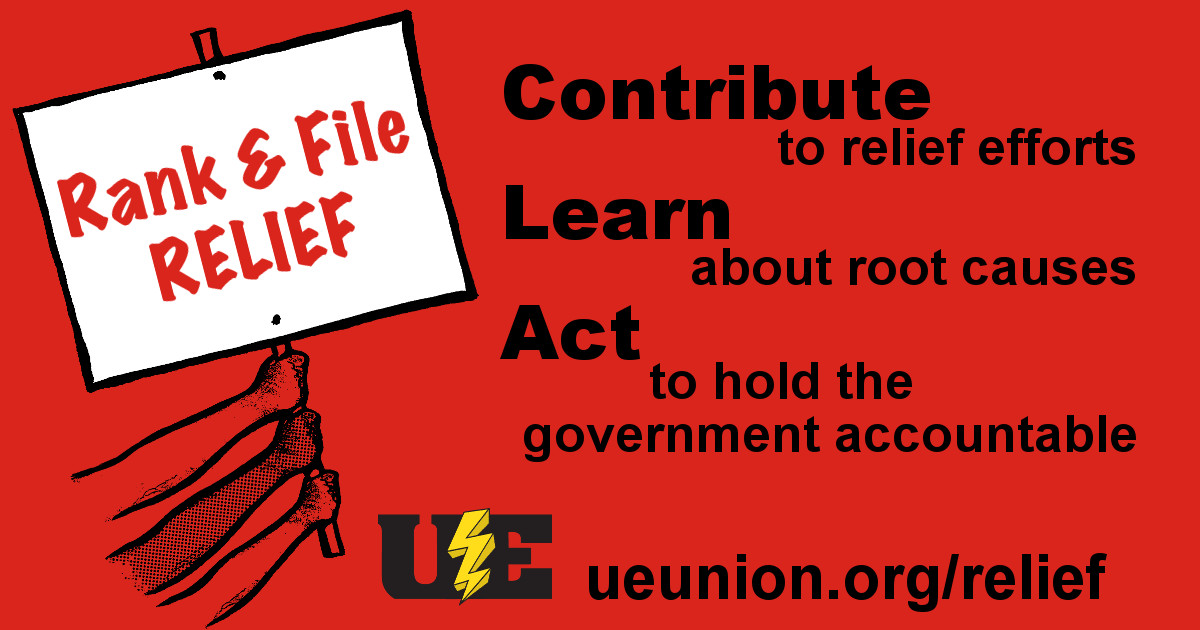 Since Hurricane Katrina struck in 2005, UE members have asked for organizations people could donate to that are reputable and not just another "non-profit" that acts more like a corporation than it does a relief effort. We have put together this page as a resource for our members, friends and allies who want to donate directly to organizations that are doing on-the-ground relief and organizing work and are accountable to local communities - something that the American Red Cross, sadly, is often not.

This list will be updated as disasters come and go but we hope it serves as a useful repository of progressive-minded relief agencies where one can be assured their dollars are well spent and affected communities needs are being taken care of.

September 16, 2018 — As Hurricane Florence hits North Carolina, UE-allied organizations in the Southern Vision Alliance are mobilizing resources to be delivered down East tomorrow in partnership with Pitt County Coalition Against Racism in Greenville, Farm Labor Organizing Committee in Dudley and also the NC Environmental Justice Network.

For those in NC, they are seeking relief supplies and organizing repair crews to support communities in Eastern NC post-Hurricane Florence! See the list of requested donations and drop-off sites in the Triangle here: www.tinyurl.com/flodropoff

Puerto Rico: Relief must include debt cancellation and moratorium on privatization

Nov 1, 2017 — Ángel R. Figueroa Jaramillo, the president of the Unión de Trabajadores de la Industria Eléctrica y Riego (UTIER), told a recent conference call hosted by Trade Unions for Energy Democracy that the labor movement must demand unitedly that the next round of aid funding to the island include a cancellation of the island's debts. Without that, it will be extremely difficult to prevent companies from swooping in to profit from the situation.

He told TUED representatives (including UE) about the emergency manager that has been appointed to run the public utility (PREPA), presumably with the goal of easing the ability of private contractors to take over the work. UTIER represents workers at PREPA.

Maria: The Hurricane Maria Community Relief & Recovery Fund is housed at the Center for Popular Democracy and governed by local, grassroots organizations in Puerto Rico. One hundred percent of monies raised will be used to support immediate relief, recovery, and equitable rebuilding in Puerto Rico for the communities hit hardest by the storm.

Harvey: The Just Harvey Recovery Fund is run by Texas Environmental Justice Advocacy Services (t.e.j.a.s.), the oldest environmental justice organization in Houston. They have worked directly with frontline and grassroots communities addressing air and chemical pollution for decades in Houston and across the Gulf Coast. “One of the most dangerous unaddressed issues is chemicals present in floodwater. Our focus will be low-income areas that sit on the fence-line of refineries, chemical storage facilities and industrial zones. These are homes that are at the highest risk of toxic waters. Our efforts will focus on cleanup efforts in these frontline communities,” t.e.j.a.s. Executive Director Juan Parras.

Irma: The Irma Community Recovery Fund is partnering with over a dozen grassroots organizations, including Central Florida Jobs with Justice and the Miami Workers Center, to ensure that no neighborhood gets left behind in the devastation of Hurricane Irma. They are providing access to basic needs such as healthcare, housing and transportation, as well as legal representation and longer term organizing. (donations processed by The Miami Foundation).

Mexico: Brigada Topos a is rescue brigade who trains rescue workers and has teams extremely prepared to aid in disasters not only in Mexico, but all over the world. The volunteer search and rescue group formed more than 30 years ago, when a group of youths - all from the working class neighbourhood of Tlatelolco - pulled victims from the rubble of Mexico's 1985 quake which killed over 5,000 people.

Grassroots Global Justice has put together a “Grassroots Hurricane Recovery” page with voices from affected communities, analysis, and opportunities to contribute.

Our sisters and brothers in National Nurses United have been organizing teams of volunteer nurses to assist in relief efforts to Puerto Rico and elsewhere.