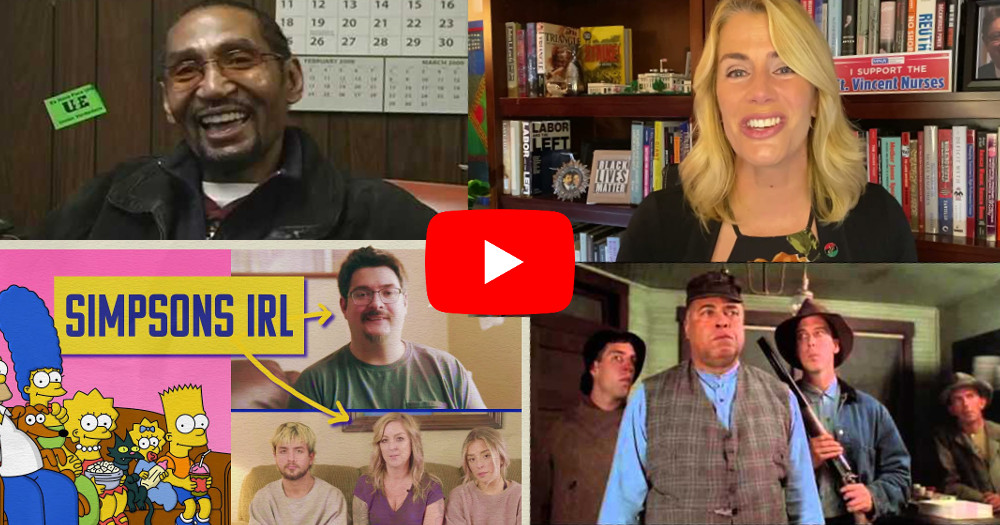 Looking for something to enliven your next local union meeting? Show one of the videos from the YouTube playlist we put together, then have a discussion.

Bring in one of the guest speakers from UE’s 2021 convention! Watch AFA-CWA President Sara Nelson’s rousing remarks on the power of workers to fight corporate greed, Dr. Linda Murray’s explanation of the stakes that all working people have in fighting racism, or retired UE Political Action Director Chris Townsend’s reflections on 24 years in the labor movement.

The YouTube series The Class Room, a project of More Perfect Union, is full of short (10-20 minute) educational videos about a variety of contemporary topics. We’ve picked out two in particular — an entertaining exploration of why most Americans can no longer afford to own a house and raise a family on a single income the way Homer Simpson did (hint: it has something to do with corporate greed), and a revealing investigation of the role of corporate profiteering in current inflation.

The Simpsons didn’t invent animation! The classic UE animated film “Free Riding Rufus” is a humorous look at the way free-riders weaken the union, and “The Myth, the Money and the Many” refutes the big business lie that wages cause high prices — although more than half a century old, it is especially timely today. “Mouseland,” an animated illustration of a 1944 speech by Canadian politician Tommy Douglas, explores what happens when a nation of mice keep electing “fat cats” to represent them — a message relevant to most of the political choices working people face in our two-party system today.

Watch the inspiring story of UE Local 1110’s 2008 occupation of the Republic Windows and Doors factory in Chicago, or a PBS special about Rose Schneiderman, a young immigrant seamstress who went on to be one of the most important labor leaders of the early 20th century. Or watch a famous speech from the 1987 movie Matewan, about the struggle to organize coal workers in West Virginia, on the importance of uniting all workers.