Stayin’ Alive: Working Class Survival from the ‘70s to Now 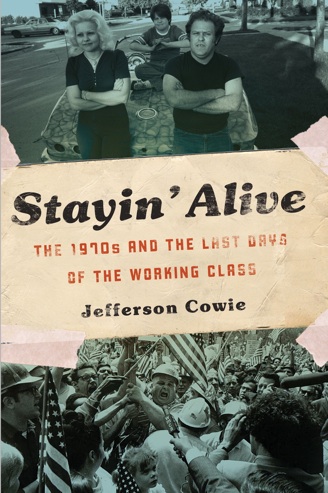 For the past three decades, the conventional wisdom in much of the labor movement has been that all of our present troubles started when Ronald Reagan fired the air traffic controllers in 1981 and broke their union.

That action was the start of many bad things that followed for unions and workers. But in his new book Stayin’ Alive: The 1970s and the Last Days of the Working Class, historian Jeffeson Cowie persuasively argues that the ‘70s was a major transitional decade in American history, and not just from the often-chaotic but hopeful 1960s to the conservative Reagan era. Cowie looks at labor struggles, popular culture, political developments and changes in the economy. He offers profound insights into how cultural, economic and political trends influenced each other – and in particular, how they turned the tide against the working class.

At 400 pages plus, this is a big book, and it covers so much ground that it’s hard to know where to begin a review. But it is an entertaining read and a coherent whole. Its diverse threads are tied together, and it makes a compelling argument that the 1970s was the decade when the working class was pushed aside from the central place it had occupied in national culture, politics and economic policy since the 1930s.

Cowie examines the chasm, coming out of the 1960s, between on the one hand, the organized labor leadership and, on the other, social movements of the ‘60s, “New Politics” liberalism and New Left radicalism. Cowie sees the failure to connect these movements as a great lost opportunity to build a new progressive majority in American society. Blame for that failure falls pretty evenly on both sides – on the complacence and prejudices of old-guard AFL leaders, and on the elitism of middle-class activists.

His chapter titled “Nixon’s Class Struggle” will surprise those who didn’t live through the Nixon era. To a great extent it surprised me, although I was a politically-aware young adult during Nixon’s presidency. Cowie’s Nixon is still the cynical, paranoid reactionary we remember, but while he did nothing of substance for labor’s economic interests, he was also the last president to seriously pay attention to the working class. Nixon was obsessed with trying to bring white workers who voted for George Wallace in 1968 into a new Republican majority, and with exploiting pro-war attitudes of labor leaders like George Meany to deepen the wedge in the Democratic coalition. Nixon failed to win labor’s lasting support, but in 1972 he benefitted from the short-sightedness of Meany and the AFL-CIO leadership, who refused to support antiwar candidate George McGovern, despite his exemplary record on labor issues.

Nixon and Reagan bookend the ‘70s, and the decline of labor’s fortunes can be seen how they each responded to strikes by federal workers – strikes prohibited by law. When postal workers struck in 1970, Nixon sent in the National Guard to sort mail, but did not try to break the union or fire its members, who actually made gains because of their strike. Eleven years later, when air traffic controllers struck, Reagan fired them all and had their leaders hauled off to jail in chains.

Cowie describes the defeat of two legislative initiatives in the second half of the ‘70s that, advocates had hoped, would revive the spirit and economics of the New Deal. These were the Humphrey-Hawkins Full Employment Bill, an effort that brought together the labor movement and its political allies with the Congressional Black Caucus; and the labor law reform bill of 1977-78. Both fell victim to a ruthlessly well-organized big business counterattack, as well as the relative indifference of the Carter administration. The labor law reform bill was modest – much weaker than EFCA – and yet viciously attacked by the corporations as a “power grab” by “labor bosses.”

In response to its defeat, in July 1978 UAW President Doug Fraser wrote a scathing letter of resignation from a government labor-management board. “I believe leaders of business community, with few exceptions, have chosen to wage a one-sided class war today in this country – a war against working people, the poor, the minorities, the very young and the very old, and even many in the middle class of our society. The leaders of industry, commerce and finance in the United States have broken and discarded the fragile, unwritten compact previously existing during the past period of growth and progress.”

Cowie offers an important insight into the meaning of Fraser’s letter, writing that “... it is actually a rather stunning admission of how limited organized labor was during even the loftiest heights of its powers in the postwar period.”

I interviewed Cowie about his book and the following is part of that conversation.

Question: You talk about the 1970s also as a turning point also in a new aggressiveness of the corporations.

Question: Your write about the rise of the Business Roundtable, the mushrooming of corporate political action committees (PACs) after Watergate, and also something I think is really important, the whole intensification of union busting. How do you think that affected the cultural and political in the decline and isolation of the working class by the end of the 70s?

Cowie: It’s interesting – the tables were turning but the AFL-CIO hierarchy still thought they were kings of the roost. They did not read the moment. Some people did. Even Fraser didn’t quite know what to do. But he says we’re going to go back to the people of Selma and we’re going to sit with the poor but, he didn’t do that. He tried to create the Progressive Alliance, which did some good, but it didn’t really change things.

Question: One of the amazing things about the book is the way you connect culture to these political-economic shifts. And you talk about cultural phenomena that were produced by people with limited or no sympathy for the working class, and particularly lacking in understanding of collective action by workers. You even point out that Norma Rae, which is about a union organizing campaign, removes that as the central theme of the film. It becomes an individual tale. How do you think the way workers were portrayed in these cultural works affected how workers saw themselves?

Cowie: That’s the $64 billion question. I kind of use those artists and cultural producers as a conduit for the ideas that are adrift. Reception studies – how do people read themselves in the culture – is tough. But I do think it creates a landscape of possibilities for identity. If you go back to the 1930s it’s stuff like The Grapes of Wrath – both the book and the movie. They couldn’t keep the book in print, it was selling so fast. And that had a very different idea of what the working class was and what working class dignity was and struggle was, than does what we see in the 1970s. So what the working class hero can be is really limited in the 1970s to the kind of antihero. Sometimes it’s a buffoon like Archie Bunker, but sometimes it’s someone really scary like Joe (the title character in the 1970 film played by Peter Boyle.) And others are just illustrative, like Tony Manero (of Saturday Night Fever) or Bruce Springsteen.