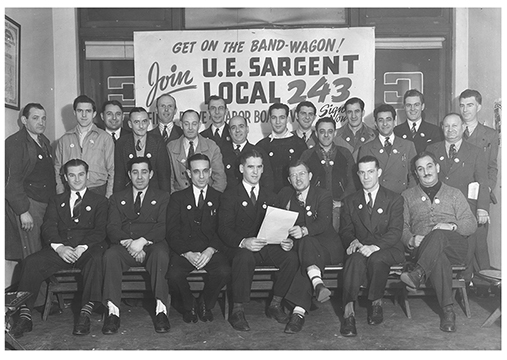 Members of the organizing committee who built the union from 1939 to the NLRB vote in 1941.
November 7, 2014
New Haven, CT
by Alan Hart, UE News Managing Editor

Members of Local 243 gathered on Saturday evening, November 1 at a banquet hall to celebrate their local's 75th anniversary. You can see a photo album of that event on UE's Facebook page. The Spring 2014 issue of the UE NEWS included the following piece on Local 243's distinguished history.

This is a year of anniversaries for UE Local 243 at Sargent Manufacturing. The company, a leading manufacturer of locks and other architectural hardware, started in New Haven 150 years ago. Local 243 was born 75 years ago. And in November, Local 243 President Ray Pompano will have been president of the local for 30 years. As far as we know, he holds the record for longest tenure of a UE local president.

Sargent workers began organizing with UE in 1939 and received their charter on May 15, 1939, just three years after the national union was founded. The late Angelo Frisketti, a charter member, told the UE NEWS in 1975 about the early organizing. Union activists asked co-workers to sign union cards, one by one. “We hid our cards,” Frisketti recalled. “We hid them until we had almost the whole plant signed up. Then we went to management and told them we had a union and we wanted them talk. If we’d let them know who had signed cards when we had only half the plant – well, half the plant would have been fired.”

But the company refused to meet with the union, and through 1941 workers pressed their demand for recognition through on-the-job actions, which included foundry workers using hammers to bang on their shovels as the signal to call a meeting, slowdown or walkout. Late that year workers decided to strike for union recognition. James Matles, UE’s first director of organization, sent a telegram to the director of U.S. Labor Department’s Conciliation Service: “Am informed 1500 Sargent and Company employees… set for walkout Tuesday morning. Were unsuccessful in bringing about meeting of company and union.” The government quickly sent in a mediator, and on December 18, 1941 the National Labor Relations Board held an election. The result was 927 votes for UE, 250 against. By March 1942 the workers had negotiated their first agreement.

Sargent has a reputation today as one of the best-paying workplaces in Connecticut. But that wasn’t the case before UE. An old saying around New Haven, which originated in the city’s Italian immigrant community, was, “I work at Sargent & Company, lots of work and no money.”

Ray Pompano was hired in July 1965, right out of high school. “Back then we’d give half our pay” to help our families, he recalled. He became steward of the skilled trades in 1971. “I started at $1.66 an hour. In the 1980s we turned it around” with some substantial wage increases. In the three-year contract negotiated in 1986, the local won 4 percent raises each year; in the 1989 contract, the raises were 5 percent each year.

“The other major struggle I remember,” said Pompano, “was when we got locked out in 1974 – more than 600 of us. We voted down the company’s final offer. The company put a padlock on the door and wouldn’t let us in. So we all marched down, in rank-and-file order, to the unemployment office at Chapel and Olive Streets.” He recalls that the company had a lawyer from New York, where locked-out workers couldn’t collect unemployment benefits, but in Connecticut they could. So the locked-out members of Local 243 qualified for unemployment benefits. “After the second week the company said ‘the doors are open’ but we didn’t go back, so the lockout became a strike.” The members were militant and unified and won a good contract, and Pompano remembers one other benefit from that strike: “After that, the company fired the big-shot lawyer from New York, from that day on that was the last time they used a lawyer” in negotiations.

Pompano recalls that in 1980, before he was president, the local agreed to give up the cost-of-living adjustment in order to keep the 100 percent medical insurance, “and we use that argument today, to keep our 100 percent medical plan. If we hadn’t given up the cost of living we might have had a few more bucks, and we keep letting them know that, 30-some years later.”

Pompano says the union has taken a balanced approach, seeking to keep the plant successful and competitive and maintain’s Sargent’s reputation for high quality, while improving the wages, benefits and working conditions. The union’s position has become more difficult now that Sargent is owned by Assa Abloy, a Swedish multinational corporation that has also bought up Sargent’s former competitors in the lock business. But the union is proud of its success. “We had some pretty respectable contracts and we moved ourselves to where we’re quite proud of our medical coverage and our wages,” Pompano says. “We’re still here because of the outstanding workforce, skills passed on from generation to generation, often within families, black and white working together. We take great pride in our workmanship.”

The local was founded to a large degree by Italian American workers, and throughout its history, unity between African American and white workers has been its key to success. This was particularly obvious in 1989 negotiations, when one of the union’s goals was to add Martin Luther King Day as a paid holiday. The company replied that it would agree to add MLK Day if the union would give up the existing benefit of each employee getting his or her personal birthday as a paid day off. This was an obvious attempt to divide white and black workers, but it didn’t work. Local 243 had pins made that showed Martin Luther King’s face and the words, “Dr. Martin Luther King Jr. - UE 243.” The entire membership wore these buttons every day in the plant. The company got the message that the members were united, and agreed to add MLK Day as a holiday, with the union giving up nothing in return.

Wayne Morrison, the local’s chief steward, is proud to be part of Local 243 and its legacy. “I’ve got 30 years now in the company. I got involved in the union to help make some changes, and I’ve seen a lot of great things happen. This is a good place to work, and Local 243 is always pushing to make it a better place to work. The union has helped me and a lot of other families to be able to own homes and do pretty well. We’re united and we’re strong.”

The UE NEWS also spoke to Frank DiNicola, who retired from Sargent in 1996 with 44 years service. He served for many years as the local’s treasurer, member of the bargaining committee, and delegate to many UE conventions and to UE District 2.  “I enjoyed enjoyed working at Sargent because we had a good union. I miss the people in there. We stuck by our guns in negotiations and when we went on strike.” DiNicola also recalled the late Harry Kaplan, UE field organizer who assisted the local for decades. DiNicola says Kaplan “was a brilliant man. He gave us a lot of backup. We couldn’t have done it without him.” He added, “We had a lot of fun. When we went on strike everything was organized real well. We had a good crew, a lot of good people. We got quite a few benefits through the union.”

Women have also played a major role in Local 243. The late Madeleine Scilla served as president from 1958 to 1978, one of the first woman presidents of a major UE local and Local 243’s second-longest-serving president. Interviewed by the UE NEWS in 1975, Scilla downplayed the significance of her gender. “In the first place, more than half the local members are women – and seven out of our 14 stewards are women. But even more important, I’m not elected because I’m a woman. I’m elected because the membership thinks I do a good job for them. My concern has always been for the membership.”

The 71st UE National Convention in 2009 was a proud moment for Local 243, held in New Haven just a few miles from the Sargent plant, in the year of the local’s 70th anniversary. In the opening session President Pompano welcomed delegates, spoke briefly about his local’s history and accomplishments, and then called for the stewards and officers of Local 243 to come forward. Over 20 men and women, all attired in blue-and-gold UE 243 jackets, marched through the hall and onto the stage as delegates stood and applauded.

That convention was later addressed by retired Professor David Montgomery, a former UE member, the most respected labor historian in the U.S., and a good friend of Local 243 during his years teaching at Yale. Montgomery, who died in 2011, talked about early 20th century struggles at Sargent, GE and Westinghouse that laid the groundwork for UE, including the 1902 strike at Sargent, led by Italian immigrant workers. That strike was defeated, but the goal for which those workers fought – a union that unites all workers regardless of skill or ethnicity – was achieved 40 years later. That early struggle also “left behind long memories,” said Montgomery, who had learned from Harry Kaplan that when UE Local 243 struck Sargent in 1951, some of the workers said “I’m making up for 1902!”