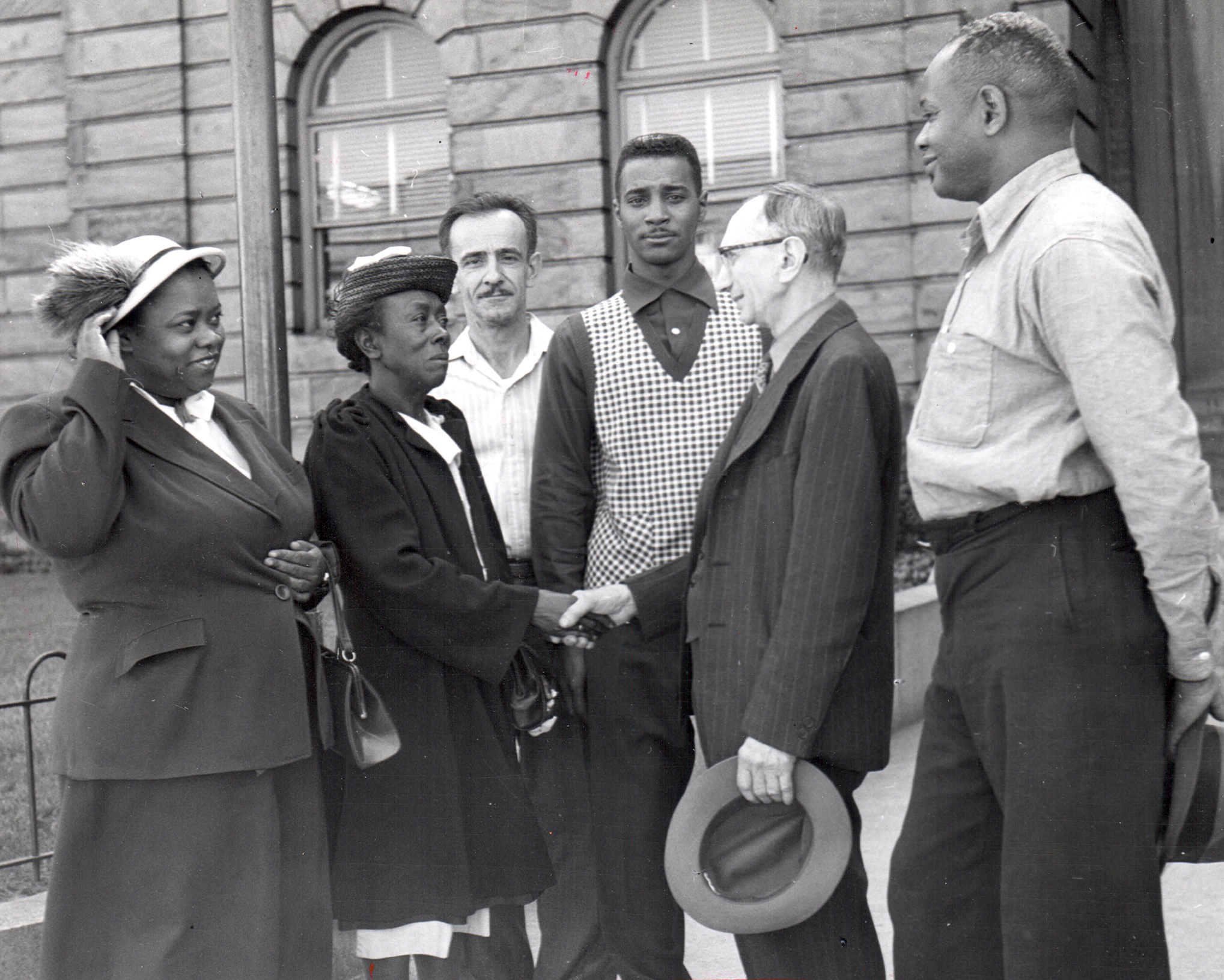 In December 1952, under a front page banner headline, the UE NEWS reported that Harold Ward had been freed. Who was Harold Ward? A previous issue of the UE NEWS carried a photo of Ward and noted that he was financial secretary of UE-FE (Farm Equipment) Local 108 at International Harvester in Chicago. In October, in the seventh week of a strike at the company, he was arrested and charged with the murder of a non-striker. But as Local 108 President Matt Halas explained: “The reason Ward was accused is clear. He is the most important Negro leader of our strike – the key man. Harvester ordered his arrest to cripple the strike and for no other reason.”

Of the 5,000 strikers at International Harvester, 1,750 – 35 percent of the membership – were African American. Locals 101, 107 and 108 met and vowed “We will not permit Ward to become a northern Willie McGee” and resolved to throw their full resources into exposing the frame-up. (Willie McGee was a Black Mississippian convicted in a blatantly unfair trial of an alleged 1945 rape of a white woman and executed in 1951 despite national protests.)

A national Committee to Defend Harold Ward was set up which directed protests to Illinois Governor Adlai Stevenson, the Cook County state’s attorney and the Chicago mayor. UE members noted that company agents had tried to use prejudice to divide the membership, but it didn’t work. By December, Ward was acquitted. He wrote to UE General President Albert Fitzgerald:

“From the great number of letters I received during the campaign on my behalf and when I was acquitted of the phony charge, it was evident that workers throughout the country were watching the case with close interest….It was quite something to watch the puzzled looks of the prison officials and petty politicians who could not understand all the pressure and fight around an ordinary Negro worker…I have learned the hard way that big business will not hesitate to persecute, deport, imprison or even execute those who resist oppressive actions against working men and women.”

This was a great victory, but it didn’t come out of nowhere. In the 16 years from the founding of UE to the Ward case, UE members had discussed and taken action to expose frame-ups of African Americans, mobilized behind proposed anti-lynching legislation, and condemned the “legal lynchings” of Blacks accused of trumped up charges. The anti-lynching movement was the “Black Lives Matter” movement of its time.

Lynching emerged as a tactic of intimidation against African Americans during Reconstruction, the 12-year period after the Civil War when federal troops occupied the South and former slaves gained many rights under federal protection. But lynching became most widespread after 1890, with the imposition of the Jim Crow system of racial segregation and extreme oppression across the South, and to a great degree in the North. Murders of African Americans by white mobs were terrorist acts aiming to maintain white supremacy, and studies conclude that from the 1880s to 1950s, between 3,500 and 4,000 Black people were lynched in the South.

By 1947 the main focus of UE’s efforts to end discrimination were job rights for African Americans in hiring and upgrading into skilled jobs in UE shops, and over the following decade UE made great strides in those fights. But lynching, denial of voting rights, and other manifestations of racism in society also received considerable attention. Speaking on the Resolution “Against Discrimination,” At the 12th National Convention in 1947. Delegate Clifton Cameron, Local 475, spoke about the rise of lynch terror at the UE Convention:

“I am very happy to say that our local is one of the organizations in Brooklyn that carried on the fight to end discrimination in baseball. (the successful fight to get the Brooklyn Dodgers to hire Jackie Robinson.) However, in discussing the question of discrimination we cannot isolate it as simply an issue by itself. The development of lynch terror throughout the country, centered particularly in the South, cannot be isolated nor separated from what is going on in the rest of the world politically today. It is part of the whole program, part of the whole campaign of big business, for higher profits. It is a part of a plan as represented by the Taft-Hartley Act, by the fight against housing, by the fight against civil liberties. The forces of reaction and monopolies in this country know that they can only achieve their fight to maintain power and control over the working people as long as they are able to divide them and keep them apart.”

Delegate Ernest Thompson, Local 427, (later the secretary of the union’s national Fair Practices Committee) made the link between the CIO push to organize unions in the South and the rise of acts of terror to thwart organizing. He added:

“… in spite of all the constitutional guarantees, the Truman administration, with the Justice Department, stands idly by. They could quickly put the railroad workers in jail, quickly carry on all kinds of loyalty purges, but the people who murder in cold blood cannot even have a gesture of bringing them to trial….I think in keeping with the resolution it would be proper that this Convention went on record and instructed the national fair practices committee of our union to initiate an intensified campaign along with other community organization to really see, if not in this session, then in the 1948 campaign that we really go all-out to end lynchings and all the illegal murders and vicious terrors that are moving into every one of our communities.”

Following the 1947 Convention the union issued a pamphlet entitled UE Means Teamwork, explaining the establishment of the UE Fair Practices Committee and calling for an end to discrimination in housing, education, and employment, ending Jim Crow, abolishing the poll tax and immediate passage of a federal anti-lynch law. Since 1940, UE conventions every year had voted continued support for the Wagner-Van Nuys Anti-Lynch Bill and urged the Senate to bring it up for a vote. This bill would have held any county in which a lynching occurred liable for damages.

In New Jersey, UE took the lead of the battle to free the Trenton Six, charged with the murder of a white shopkeeper. These six African American men were rounded up by a motorized “bandit squad” which combed the poorer districts of Trenton arresting Blacks without warrants, terrorizing the entire community. There was no evidence connecting them to the murder, no eyewitness recognized any of them, and the police never investigated their alibis. Their first trial was so blatantly unfair that the New Jersey Supreme Court threw out the conviction and ordered a new trial. The state’s case had been based on “confessions” which it turned out, were written by the police and signed by the men after they had been drugged, and then denied by the accused as soon as they regained consciousness.

Bessie Mitchell, sister of one of the accused men, fought single-handedly for justice. She went to her union, the Garment Workers, and to the FBI and other organizations, but they all refused to help. Eventually she met with the Civil Rights Congress, which provided lawyers to appeal the convictions. UE learned about the case, raised thousands of dollars for the defense, and used the weekly UE radio program to expose the frame-up. Members from UE Local 409 at the Kramer-Trenton Company met with the families of the accused men, and Tony Lizzano, president of UE Local 409 explained, “This local has always fought discrimination, and that’s why we’ve been fighting all along for the Trenton Six. These men are being tried on the same type of frame-up that was used on the national leaders of our union. It’s the same political bosses and the companies behind them.” Local 409 member Ellsworth Walker added, “If we let the politicians in this state get away with the frame-up of the Trenton Six, no working man, white or black will be safe.” The third trial took place while the 400 members of Local 409 were on strike. In this final trial four of the six were acquitted, one had died in prison and the last defendant, who pled guilty, was sentenced to life and was paroled in 1954.

In the early 1950s the UE Steward was a 24-page monthly magazine. The April 1952 issue was titled, “What Price Discrimination?” It provided facts and figures on the lopsided wage differentials between workers performing the same jobs in the North and the South while African American workers “are terrorized and killed to keep them from challenging the rule of those who profit from discrimination.” It pointed out that the Jim Crow system was thoroughly anti-labor and anti-democratic, and that when unions have tried to organize in the South without challenging Jim Crow, they have failed. “Where unity is not fought for, where Jim Crow is tolerated, defeat is certain.” As UE constantly pointed out in its fight against racism and for women’s equality, discrimination against any group of workers endangers the wages and jobs of all workers, and fighting discrimination is in the vital interest of all UE members and workers everywhere. This message was conveyed repeatedly in the UE NEWS, UE Steward, resolutions, pamphlets, leaflets, meetings, and in the very effective work of UE Fair Practices Committees at the local, district and national level.

Opposition to Jim Crow, lynching, frame-ups, and all racist violence was a top priority of UE more than 60 years ago and throughout our history. In the past two years, UE members in many places have joined in “Black Lives Matter” protests against the killings of African Americans by the police. During our 74th Convention in Baltimore last August, delegates marched to city hall with other unions and community group, demanding justice in several local labor struggles, and justice for Freddie Grey, a 25-year-old Baltimore man who died in police custody earlier last year. Delegates also extensively discussed and approved a strong resolution, “Fight Racism,” that concludes, “Working-class unity can never be taken for granted; winning depends upon our success in the fight against racism.”

It is inspiring for those of us who are involved in these struggles today to know that we stand on the shoulders of UE sisters and brothers who, decades ago, fought bravely against all forms of injustice, racism and discrimination.