The 1918 Strike at Erie General Electric 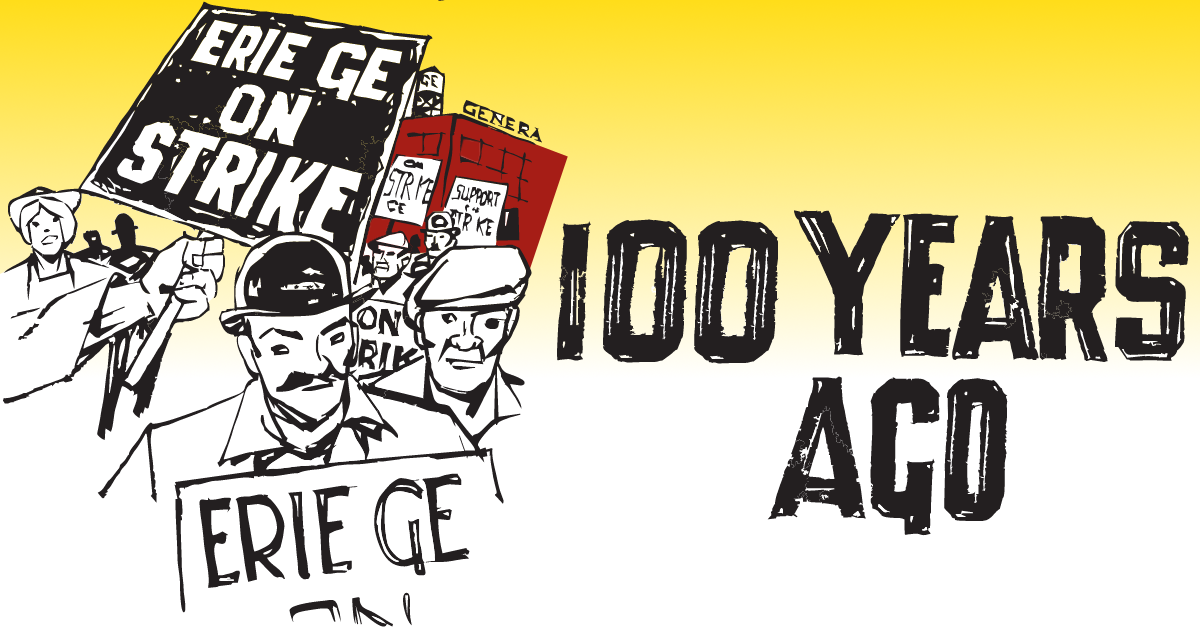 As we know, UE is now 82 years old, founded at a March 1936 meeting in Buffalo by rank-and-file delegates from a dozen plants in the electrical equipment and radio manufacturing industries. But in each of the plants represented at that founding convention, and in the other plants where workers formed UE locals in the months and years that followed, a history of struggle going back many years led to the formation of UE. This year is the centennial of one of the most important of those struggles, which blazed the trail for UE and specifically for one of our largest and most important affiliates, Local 506.

I first heard about the 1918 GE strike in 1979, when I worked at GE, served on the executive board of Local 506, and was the volunteer managing editor of the union’s shop paper, the UE 506 Union News. Pasquale “Pat” Leone, the union’s divisional chief steward of Building 2, put me in touch with an older man he knew who had participated in that strike. Dan Carbone, then age 78, had been a teenage apprentice at the time of the strike, but participated in the strike because of his socialist and labor upbringing – his father had been a socialist immigrant from Italy. Carbone told me all he could remember about the strike, but didn’t recall a lot of details. I was able to learn more about it in archival newspapers at the public library (mostly the defunct Erie Dispatch), and this led to a two-page article on the strike that I wrote for the Union News. The late great labor historian David Montgomery, in his 1987 book The Fall of the House of Labor, included a 20-page section on GE that deals with this strike, and cited the Local 506 article as one of his sources.

On November 25, 1918, 60 union delegates from six major GE plants met in Erie, hosted by the Erie branch of the International Association of Machinists (IAM). While all of the delegates were members of craft unions affiliated with the American Federation of Labor (AFL), their goal was something beyond craft unionism. They founded the “Electrical Manufacturing Industry Labor Federation” which aimed to unite all GE workers, regardless of craft, in a single organization. They adopted a four-point program that shows that these workers were not only militant unionists, but visionary political thinkers as well. First, they demanded a 44-hour workweek; the workweek at GE was then 55 hours. Second, they called for federal unemployment compensation, because laid-off workers at the time received no government assistance. Labor did not win unemployment compensation until the 1930s.

The third demand of the Erie GE workers’ conference was the release of “all political prisoners in this country.” That meant people in prison for opposing the war, including many union members. Opposition to World War I was widespread in the labor movement, before and after the U.S. entered the war, and government repression had been harsh. Just six weeks before the Erie conference, Eugene V. Debs, the charismatic founder of the American Railway Union and presidential candidate of the Socialist Party, had been convicted in a Cleveland courtroom and sentenced to 10 years in prison for the “crime” of giving a speech in Canton in opposition to the war. In April 1918, 101 activists in the Industrial Workers of the World (IWW) were tried in Chicago for opposing the war, the largest mass trial in U.S. history up to that time. All were convicted; most received harsh sentences of 5, 10, or 20 years in federal prison.

The fourth and final plank of the GE workers’ program called for 50 percent of the U.S. delegation to the Versailles peace conference to be from labor. This was the boldest and most surprising demand. It shows that these workers believed that labor’s foreign policy goals differed from those of the corporations, and that working people should have at least an equal say with capital in shaping the postwar world.

On December 10, 30 days after the Armistice ended the war, William Purdum of the IAM and A.H. Woolridge the International Brotherhood of Electrical Workers (IBEW), each representing craft union members in the Erie GE plant, met with plant manager Matthew Griswold. They demanded union recognition and an end to the company’s unfair layoff policies. The company was ignoring seniority and had dismissed 10 workers for union activity. The unions also demanded reinstatement of workers who had been lured to Erie with promises of jobs, as well as a shorter workweek instead of layoffs.

Griswold refused to negotiate with the unions – as the company would continue to do – so at 10:00 a.m., approximately 1,000 workers walked off the job. They marched to the Central Labor Union on State Street in downtown Erie for a meeting. By December 12, there were 2,300 on strike and the plant was “closely picketed by both men and women strikers,” according to the Erie Dispatch.

In the days that followed, the strike spread to other GE plants. By December 20, “nearly all” of the 23,000 GE workers in Schenectady, NY – GE’s flagship plant and its corporate headquarters – were on strike. Half of Schenectady’s 3,000 office workers even joined the work stoppage. Another 3,500 struck the Pittsfield, MA plant, as well as most of the 4,400 workers in Fort Wayne, IN.

The only major GE plant that did not strike in solidarity with Erie was Lynn, MA, GE’s second largest factory with 12,600 workers. That’s because in July the Lynn workers had conducted their own sitdown strikes and a three-week walkout. The National War Labor Board (NWLB), set up by the federal government to resolve labor disputes during the war, had intervened. The board ordered GE to grant pay raises, reinstate fired union activists, and to recognize “shop committees” (but not unions). Since in Lynn the shop committees consisted of elected union representatives, this last point was a win for the unions. But the NWLB put a condition on its award: it would be nullified if workers struck again. So the government had placed Lynn workers in a situation where they would lose their recent gains if they walked out in solidarity with Erie and the other plants.

Back in Erie, the strike was a lively affair, with parades, dances, a minstrel show, a “musicale” and other activities. The local unions distributed relief daily to strikers’ families, but the international unions to which they were affiliated offered no financial help to the strike. This left a bitter taste in the mouths of GE workers after the strike’s defeat.

The company’s stubborn refusal to negotiate, and the limited resources of local strikers, led to the strike’s end after about four weeks. And, as Montgomery bluntly states, “The NWLB broke the strike.” Having successfully prevented the strike in Lynn, the board similarly threatened Pittsfield workers with loss of their shop committee if they did not return to work. In Erie the strikers agreed to return to work if the NWLB would settle their grievances, but GE took the position that, because the war was over, the War Labor Board no longer had any authority. The next day the plant manager said, “… due to a shrinkage of business, there will be only a reduced number of positions open at the plant.” Erie union leaders brought 300-400 affidavits of discrimination to a NWLB hearing in New York, and the board promised to send “examiners” to Erie, but it never did anything to address Erie workers’ concerns. The company gradually brought strikers back to work, at its own pace and on its own terms.

But in all of its plants, GE then began to purge union leaders and activists from the employment rolls. The Electrical Manufacturing Industry Federation held a convention in February 1919 in Schenectady. It announced its intention to build “a shop stewards’ industrial organization” throughout the industry, and delegates expressed their anger at the AFL craft union for cutting off strike benefits, and thereby killing the strike, as soon as the NWLB stepped in.

The strike ended in defeat, but it left behind lessons on which later victories would be built. When they resumed organizing in the 1930s, GE workers in Schenectady, Lynn, Erie and other plants were determined to build a new type of union, an industrial union, democratically governed by the rank and file and representing all workers in their industry. Even the 1918 call by GE workers for 50 percent of the U.S. delegation to the Versailles peace conference foreshadowed UE, which has always been more willing than other unions to question the direction of U.S. foreign policy.

As David Montgomery wrote in The Fall of the House of Labor, “…the styles of organization developed by GE’s employees in 1918-19 foreshadowed the practice by which the CIO’s United Electrical, Radio and Machine workers were to bring unionization in the 1930s.” Those workers, although they didn’t win, laid the foundation for our union. Let’s carry on what they started a century ago!