“Them and Us” Unionism in the Deep South 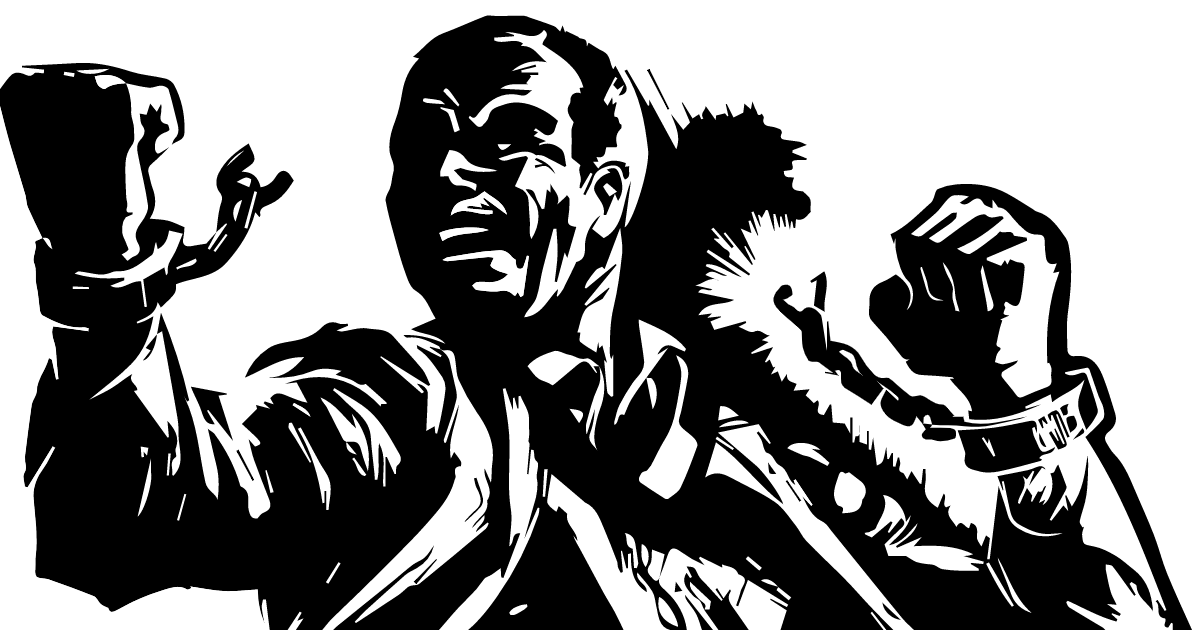 Illustration based on cover of 1951 Mine Mill pamphlet “Free Our Hand!” — an address by Asbury Howard delivered at IUMM&SW Convention, Nogales, Arizona, September 13, 1951.
February 1, 2022
By Jonathan Kissam

In the 1930s, as rank-and-file workers in the electrical manufacturing industry were establishing UE in workplaces like the giant General Electric plant in Erie, PA (Local 506) and Sargent Lock in New Haven, CT (Local 243), a union with a similar “Them and Us” philosophy of unionism was building militant, interracial unions in iron ore mines in an area known as “Red Mountain” near Birmingham, Alabama. Although those local unions fell victim to the same forces of red-baiting that attempted to destroy UE in the 1940s, for a decade they created a culture of aggressive struggle and unity among Black (and many white) miners, a culture whose legacy informed the civil rights movement decades later.

That union, the International Union of Mine, Mill and Smelter Workers — commonly known as “Mine Mill” — already had a storied history before it arrived in Alabama. Founded in 1893 as the Western Federation of Miners, it had won the eight-hour day as early as 1894 for union miners in Cripple Creek, Colorado. It helped found the Industrial Workers of the World in 1905, although later left and joined the American Federation of Labor.

Alabama iron miners had invited Mine Mill organizers to help them organize in 1918, but the organizers were violently driven out of town by company thugs before they were able to build stable organizations. Those company thugs, according to historian Brian Kelly, became “the basis of the Jefferson County Ku Klux Klan … the Klan has its origins, really, in the attempt by the employers to break up the union.”

In the 1930s, as workers in industries across the country were rising up and establishing the new industrial unions of the Congress of Industrial Organizations (CIO), Mine Mill — one of the CIO’s founding unions — returned to Alabama. Although strikes in 1934 and 1936 were unsuccessful, in 1938 the newly-established National Labor Relations Board ordered the company to rehire 160 Mine Mill members who were fired during the strikes and provide back pay. Shortly thereafter the union won recognition from the Tennessee Coal, Iron and Railroad Company (TCI), a subsidiary of the giant U.S. Steel corporation.

Mine Mill, like UE, practiced aggressive struggle and had a strong commitment to uniting all workers across racial barriers. Its locals in Alabama had a provision in their charters ensuring that the locals’ top offices would be evenly split between Black and white workers. Also like UE, it was accused of being “Communist-dominated” which, in the context of the South, carried connotations not only of foreign domination but of seeking to promote social equality between Black and white workers.

While Mine Mill received its most enthusiastic support from Black workers, significant numbers of white workers also supported the union. Historian Horace Huntley, whose father and grandfather were Mine Mill members, told an NPR interviewer in 2018 about a white Mine Mill activist named Phil Tindle:

He lived in the iron ore mining camp. He and other white miners … they were different kinds of people, you know. They didn't hold one to a position based upon their color. And that was unusual for Alabamians in the 1930s, '40s, '50s and '60s and, to some degree, even today.

Up against the Company, the CIO and the Klan

Mine Mill not only limited the companies’ ability to exploit their workers, its example of interracial unionism also threatened the social structure of the Jim Crow South, which kept power in the hands of a small number of wealthy white people and impoverished workers of all races. As happened in many UE workplaces after World War II, the companies, the local elite, and the CIO conspired to replace Mine Mill with a more compliant union — in this case, the Steelworkers.

The company explicitly used race as a tool in its attempts to destroy the union. Before Mine Mill was recognized, the workers at TCI were approximately 80 percent Black — TCI hired Black workers because they could pay them less. But once the union came in, TCI mostly hired white workers, assuming that they would be less likely to support Mine Mill. According to an oral history interview with Mine Mill member Elsie Culpepper, “It was so designed that there were never too many whites that worked in the mines. They hired all those white men, and they killed Mine Mill.”

Mine Mill, which was still at this point a member of the CIO, appealed to the labor federation to intervene to prevent the Steelworkers’ raid, but to no avail. (UE withdrew from the CIO in 1949 in part because of its failure to prevent other CIO unions from raiding UE shops.) In fact, CIO representative Van Jones met with white Mine Mill members and promised them that if they joined the Steelworkers they would have all-white locals.

An NLRB election to replace Mine Mill was scheduled on April 21, 1949, but Mine Mill wasn’t just facing off against the company and the Steelworkers — the Ku Klux Klan also joined the fray. Although firmly under the control of local elites, the Klan was successful in recruiting a significant number of white workers, who sadly chose to align with their bosses on the basis of shared racial identity instead of standing in solidarity with their Black co-workers. The night before the representation election, a hundred Klansmen in white robes and hoods rode by the Mine Mill office with burning torches. Mine Mill’s national Secretary-Treasurer Maurice Travis travelled to Alabama to speak in a radio debate with the Steelworkers, but after showing up at the radio station was beaten so severely by Steelworker supporters that it left him blind in one eye.

On the day of the vote, according to Mine Mill Education Director Graham Dolan:

Repeated reports of intimidation were phoned into our office during the day. Every automobile carrying white workers was stopped and its occupants told by roving gangs of Steel hoodlums that if they did not vote for Steel they would be killed or beaten up. The Steel hoodlums told the workers that they would know how they voted, that they had an arrangement with the Company for so knowing.

The race-baiting, red-baiting and violent intimidation proved too much, and Mine Mill lost the representation election at TCI to the Steelworkers.

“The Union meant a coming of freedom”

Huntley, the historian, conducted oral history interviews with many former Mine Mill members in the 1970s. He sums up what the union meant to Black workers:

To black workers, Mine Mill was much more than just another labor organization. Many miners related to this writer that prior to Mine Mill on Red Mountain, blacks lived in the “shadow of slavery.” For them the Union meant a coming of freedom, justice and equality. That labor organization became a way of life, and one that those workers cherished. With the loss of the election, that way of life was dealt a near fatal blow.

Nonetheless, Mine Mill’s legacy lived on in the Birmingham area, especially in the Bessemer Voters’ League (BVL), which historian Max Krochmal calls “the most durable institution” of the civil rights movement in Bessemer, the industrial suburb of Birmingham that encompassed much of the iron ore mining areas. Asbury Howard, Sr., a TCI miner who became a Mine Mill official, led both the BVL and the local NAACP until the latter was banned by the state in 1956. According to Krochmal, Howard “and untold others served as the foot soldiers of the civil rights movement.” Mine Mill veterans and other Black workers

led the battle for access to skilled jobs, joined the ACMHR [the Alabama Christian Movement for Human Rights, an organization founded in 1956 after the NAACP was banned], formed the unit of "ushers" who protected the movement against violent attack, conducted direct action demonstrations in cafeterias and on buses, and registered voters.

Although it was defeated by the Steelworkers at TCI, Mine Mill survived into the 1960s as an independent union (in 1950 it was formally expelled from the CIO for “Communist domination”). A militant strike waged by mostly Chicano Mine Mill members in Grant County, New Mexico in 1951 was the subject of the legendary labor film Salt of the Earth. Most of Mine Mill merged into the Steelworkers in 1967, but its largest local — in Sudbury, Ontario — remained independent until 1993, when it became a local of the Canadian Autoworkers, who later helped found UE’s Canadian sister union Unifor.

The iron ore mines in Alabama all closed by the 1970s, but the city of Bessemer was thrust from obscurity into the national spotlight in early 2021 when workers at the giant Amazon warehouse there became the first workers at an Amazon facility in the U.S. to try to organize their shop through the NLRB process, an effort that some commentators connected to the history of Mine Mill in the area.

The history of Mine Mill in Alabama is a cautionary tale about how organizations like the Klan — and today’s so-called “alt-right” — can lure workers into choosing their racial identity over class solidarity, with disastrous consequences for militant unionism. But it also demonstrates that building militant unions that unite workers across racial lines is possible even under the most difficult circumstances.