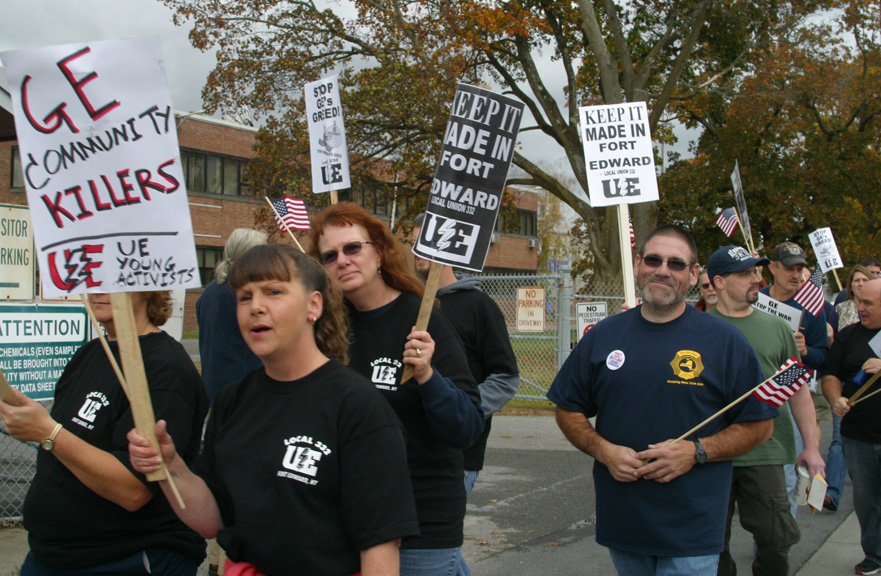 UE Local 332 has issued a bulletin to its members, following the end of the contractually mandated 60-day "decision bargaining" over GE's plan to close the Fort Edward plant. The following is the full text of the bulletin.

Despite our best efforts and 17 bargaining sessions over the last 60 days, we are saddened to report that our Union has failed to achieve an agreement with GE to keep the Fort Edward plant open beyond next September.

Yesterday, GE formally rejected our request to extend the bargaining period an additional 30 days and it is now clear to us that the company had no intention to engage in serious bargaining to save the Fort Edward plant. Throughout the past 60 days, GE made no effort to involve its business leaders in the bargaining and made no proposals to save the plant. It is clear to us now that GE was just going through the motions to fulfill its legal and contractual obligations and never seriously considered any alternative to moving to Clearwater, Florida.

Earlier this week, we made creative proposals to establish a partnership between our union, GE, and the public to save the plant. Our proposal contained substantial sacrifices – the loss of almost 10 percent of our jobs which would result from modernizing and automating the plant – as well as $22 million dollars in government financing to keep it operating for the
foreseeable future.

GE scoffed at our proposal and told us that it wanted more than $6 million dollars per year in labor cost savings on top of what we already proposed. Based upon that statement, it was obvious to us that GE would accept nothing less than a wage cut of $17.88/hour for the 163 workers who would have been retained. GE is extremely profitable here and elsewhere and has no justification for insisting that we work for $11.12 per hour.

In the coming days, we expect that GE will announce its final decision to relocate to Clearwater, Florida, where it intends to pay poverty wages of $12 per hour to those it hires as regular employees and $8 per hour to contingent employees. Due to poverty wages imposed by this powerful and profitable corporation, GE’s Clearwater employees will undoubtedly rely upon
public assistance, food stamps, and other social welfare programs to offset their low incomes from this highly profitable corporation. We, the taxpayers will once again be bailing out GE, which pays almost nothing in taxes.

Once again, GE, which falsely claims to be a good corporate citizen intends to use our taxes and social programs to soften the blow of its aggressive and unrelenting campaign to slash and devalue wages it pays to U.S. manufacturing workers and make even greater profits.

It didn’t have to end up this way. Our elected officials – most notably Governor Cuomo – could have and should have played a prominent role in leading the fight to save these important decent paying manufacturing jobs. Unfortunately, Governor Cuomo’s office was nowhere to be found. Despite repeated efforts on our part to engage him, Mr. Cuomo’s office never even granted us the opportunity to meet with him or his staff to listen to our concerns and work with us on a plan to save the Fort Edward plant. During one brief phone conversation, a Cuomo staffer threw up his hands and callously told us “They want to move to Florida, I can’t stop them.” On Thursday and Friday, we received some indication that Governor Cuomo might work with us, but it was much too little and too late.

Based upon the comments from Cuomo’s office, we strongly believe that GE officials poisoned the well by telling public officials in September before bargaining even started, that its plan to move to Clearwater was a done deal. In doing so, the Company hoped to stop public officials from participating in a meaningful effort to block the move to Florida … and it appears to have worked. We wonder whether the Cuomo administration will now let GE out of its obligation to clean up the Hudson River, just like it is now sitting idly by and watching a plant close that contributes $35 million in annual revenue to the Washington-Warren-Saratoga county area.

We want to thank our members and leaders for all of their hard work. We also thank Mayor Traver, Supervisor Suprenant, and Warren County Economic Development Corp. President Ed Bartholomew for all of their assistance and support. Although formal bargaining with GE has ended, we will be continuing our fight to save the Fort Edward plant and our jobs.

You can download a pdf file of the bulletin from the following link.