Rebellion From the Bottom Up: The Low-Wage Worker Movement 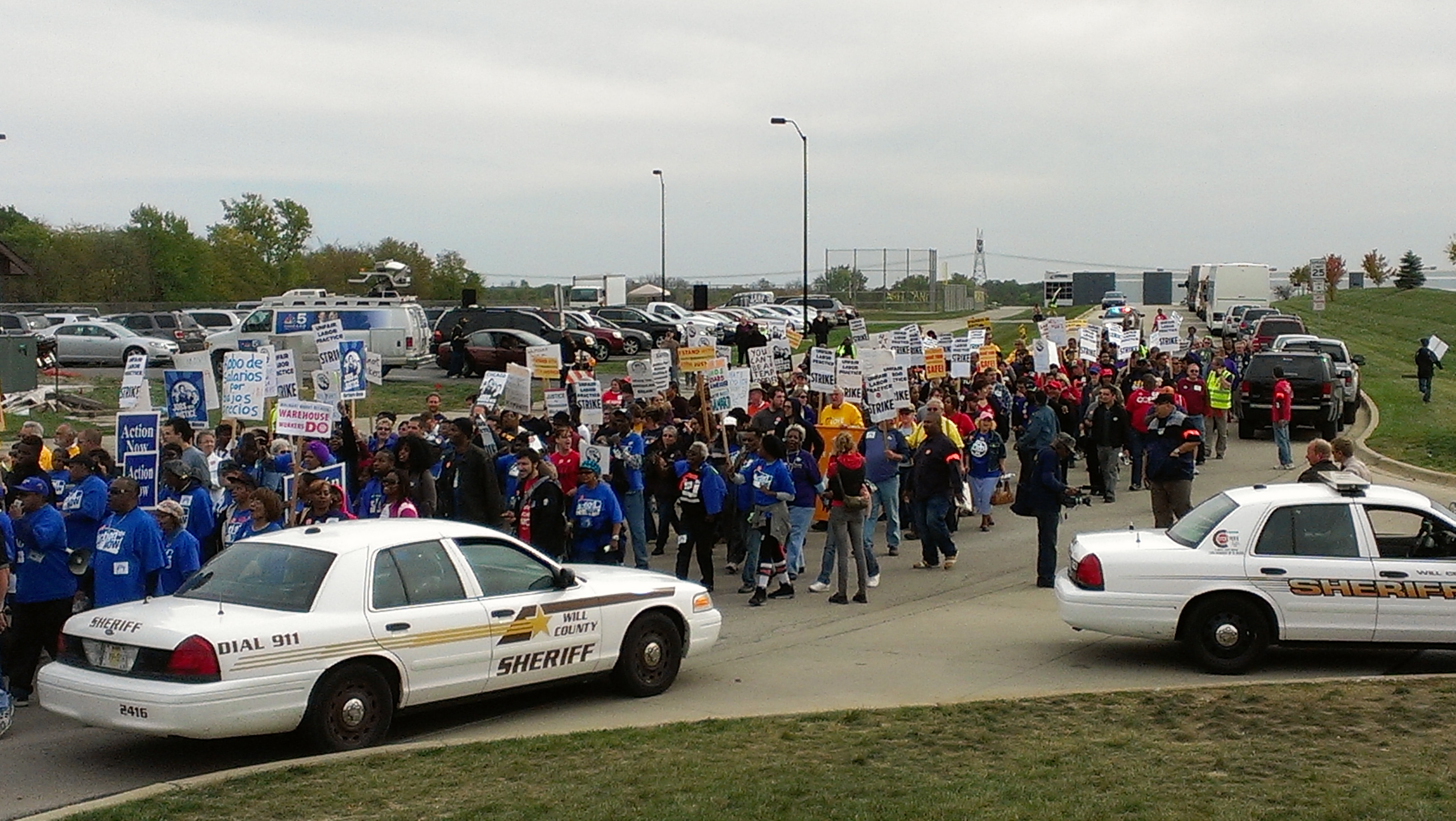 Mass rally in support of striking workers at the Walmart warehouse in Elwood, IL, September 2012.
July 11, 2014
by Alan Hart

On June 4, Walmart workers in several U.S. cities staged protest strikes, demanding higher wages and “Respect Now!” This was the latest manifestation of a growing movement for change among people at the bottom end of economic inequality, low-wage workers in such industries as retail, restaurants and fast food, and logistics. Three weeks earlier, on May 15, fast food workers across the U.S. and around the world struck to demand a $15 hourly wage.

For the most part, this has been a movement not of workers employed by small businesses, but workers employed, directly, by some of the biggest and most profitable companies in the country. These are workers – mostly young, including many women, and ethnically diverse – who are directly confronting some of America’s biggest corporations, who have become obscenely rich by paying wages that no one can live on.

The greed of these companies is possibly exceeded by their arrogance and dishonesty. Rather than raise its employees’ pay, Walmart has spent millions on advertising campaigns aimed not at selling merchandise, but at selling us the lie that Walmart workers are well-paid and have rosy prospects of advancement. McDonald’s gives its employees, instead of adequate wages, advice on how to survive on less than a living wage. Last year during the Christmas season McDonald’s employee website offered workers advice on “Digging Out of Holiday Debt,” with such suggestions as this: “Selling some of your unwanted possessions on eBay or Craigslist could bring in some quick cash.” Elsewhere on its site the company encouraged workers to break their food into small pieces so they will feel like they’ve had enough to eat!

The new wave of activism among these workers is one of the most hopeful developments in our country in recent years, and it’s only appropriate. If we’re going to do something about outrageous and worsening inequality, who better to lead it than these workers, who toil long hours for wages that keep them trapped in poverty?

Empowering workers and building unions is an obvious answer to inequality, and we know from the history of the past century that when unions are strongest, inequality is significantly reduced. The union movement experiences its greatest growth when rank-and-file workers take the lead and build unions from the ground up. That’s always been UE’s philosophy, so it’s not surprising that UE is deeply involved in this movement. This includes UE’s pioneering work with public employees in three Southern states where they don’t have the right to bargain – North Carolina, Virginia, and West Virginia – where our members have build vibrant unions that are challenging the status quo in their workplaces and in state government.

UE’s organizing among Renzenberger workers across the country is part of the movement to bring economic justice to low-wage workers. These workers drive vans to transport railroad work crews to and from work sites. It’s work that in the past was performed by railroad employees who were represented by unions and compensated with livable wages and benefits. But the railroads decided to contract the work out to companies such as Renzenberger paying poverty wages. By organizing into UE, Renzenberger drivers are beginning to turn that around.

UE’s work with Warehouse Workers for Justice (WWJ) in the Chicago-Joliet area since 2009 has also helped build the low-wage workers movement and awareness of inequality.  Some of the improvements those workers have won include an end to piece rate pay that often resulted in sub-minimum wages; raising starting wages from the state minimum wage to $11, which put an additions $2.9 million a year in workers’ pockets; and recovering over $1,000,000 in stolen wages and benefits, including over $800,000 in Walmart's Elwood warehouse alone. The work of WWJ and Warehouse Workers Organizing Committee has also improved health and safety conditions, including winning heat for the first time at the Walmart Consolidation Center in Hammond, IN; provided education on their legal rights to over 17,000 low wage workers; and launched and won more than a 20 workplace justice campaigns that have raised wages, ended discrimination, sexual harassment and unfair firings in key warehouses in the region.

In September 2012 workers at a Walmart warehouse struck against illegal company retaliation. They returned to work 21 days later with full back pay. An allied worker group, Warehouse Workers United, struck a Walmart warehouse in California at the same time.

The Walmart warehouse strikes paved the way for strikes at 100 Walmart stores on Black Friday, November 23, 2012. A week later, over 100 fast food workers in New York City walked off the job demanding higher wages, better working conditions and the right to form a union without retaliation. More fast food strikes followed in April and May 2013 in New York, Chicago, St. Louis, Detroit, Milwaukee and Seattle. On July 29 some 2,200 fast food workers struck in those cities and others.

The demand for a $15 minimum wage has become the national unifying theme of these actions, as well the right to organize and join in union activity without retaliation and protection against gender and racial discrimination. But the movement has been built in local struggles.

The low-wage workers movement includes workers centers, organizing committees, grassroots independent unions and immigrant rights groups. They have taken on fights for higher municipal minimum wage laws and the right to paid sick days, and the widespread practice of wage theft. Workers whose hourly pay rate is pathetically low are often paid even less, as employers like Walmart and McDonald’s systematically cheat them out of hours that they’ve worked including overtime.  Challenging these corporate crimes (which violate state and federal laws) and winning back stolen wages helps empower workers and boost organizing.

“When we measure it,” Gordon Lafer, a political economist at the University of Oregon’s Labor Education & Research Center, recently said on the PBS show Moyers & Company, “the total amount of money stolen out of American workers’ paychecks every year is far bigger than the total amount stolen in all the bank robberies, gas station robberies, and convenience store robberies combined.”

We should not be surprised that the growth of this movement has provoked a counter-attack. An article on the website Political Research Associates, political research.org, reports in detail on the U.S. Chamber of Commerce’s malicious campaign against the low-wage worker movement. In “Dark Money, Dirty War: The Corporate Crusade Against Low-Wage Workers”, Mariya Strauss writes that the Chamber of Commerce and the National Restaurant Association are using the tactics they’ve used successfully against unions to weaken or destroy the low-wage worker movement. “The U.S. Chamber is using… attack ads, articles from right-wing think tanks… and op-eds in major newspapers echoing similar refrains—to persuade the public and the government that all low-wage and immigrant worker organizing groups should be subjected to the same financial reporting and internal structuring requirements that unions face. They aim to impose severe restraints on charitable contributions and to limit or ban secondary boycotts (among other activities). If their opponents are successful, the low-wage worker sector—including groups with no active relationships with unions—could be hobbled.”

This is a major, high-stakes struggle between workers and the corporate rich. All of us who support worker rights, democracy and economic justice – including UE locals and members – need to support the struggles of fast food, retail, warehouse and other low-wage workers. The resurgence of worker activism in these industries is a key to the revival of the labor movement.