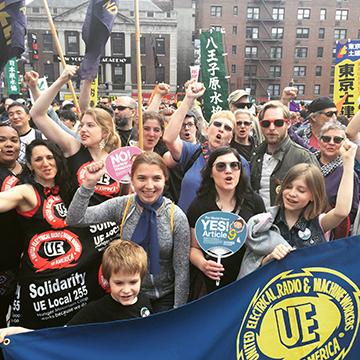 On Sunday, April 26, UE Young Activists and other UE members participated with thousands of other people in a march in New York City for a nuclear-free, just, and sustainable world. This year is the 70th anniversary of the atomic bombings of Hiroshima and Nagasaki, Japan. The United Nations holds a conference to review the Nuclear Non-Proliferation Treaty every five years, since the treaty went into effect in 1970.

More than 200 delegates of the Japanese union federation Zenroren came to New York to march for nuclear disarmament, part of a large delegation of 1,000 peace activists from Japan organized by Gensuikyo, the Japan Council Against Atomic and Hydrogen Bombs. Along with other U.S. and international peace groups and the UE delegation, they marched from Union Square before marching to Dag Hammarskjold Plaza at the UN Headquarter.  Hundreds of origami cranes were shared with the marchers. In Japanese culture the crane is the symbol of peace, as the dove symbolizes peace in Western culture.

The day after the march, UE and Zenroren members and representatives of U.S. Labor Against the War met at the SEIU 1199 auditorium for a discussion of the Non-Proliferation Treaty and ways to cooperate to advance the goals of peace and nuclear disarmament. That meeting was followed by an exchange between young activists from Zenroren and UE. They discussed the challenges facing young workers and detailed ways to organize other youth. Kathleen Coonrod, chief steward of Local 203, detailed the steps her local is taking to inform and organize members for their upcoming contract negotiations. Autumn Martinez, president of Local 255, proposed to the group a need for solidarity across borders and how the two organizations could connect through social media.