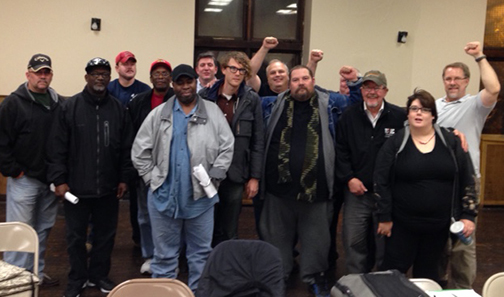 Members of the UE bargaining committee on the final day of negotiations.
December 7, 2015
Chicago

In the last several weeks, concluding on December 2, some 250 Renzenberger drivers in 14 rail yards in Nevada; Galesburg, Illinois; Ohio and New Jersey voted to join with 950 drivers in California and Greater Chicago and Northwest Indiana in a national union contract. The new national agreement raises wages, adds paid time off days, and provides protections against favoritism and unfair discipline, including a strong grievance procedure and the right to union representation.

The national contract covers UE Renzenberger drivers in California, Illinois, Indiana, Nevada, New Jersey, Ohio -- as well as any new bargaining units organized by the union -- and means increased bargaining power for these workers. The contract will expire on August 23, 2018.

Renzenberger drivers transport rail crews for most of the nation’s Class 1 as well as short line and terminal Railroads. Yard drivers transport railroad workers within a rail yard, and road drivers haul rail workers between rail yards and other locations. During the contract campaign, hundreds of railroad conductors and engineers signed petitions supporting better wages and conditions for Renzenberger drivers.

Upon ratification all drivers in Nevada, Galesburg, Ohio and New Jersey will receive a 31 cent increase to their hourly base wage. California and Greater Chicago/Northwest Indiana drivers will receive previously negotiated wages. Those with one year or more service will receive a 41 cent raise in August 2016 and 51 cents in August 2017. The contract specifies minimum wage rates for various locations.

Employees called in to work or to report to the office during their time off must receive at least two hours pay. Workers sent home after reporting for work are also entitled to a minimum of two hours pay. A driver who trains a new driver will receive $50 upon completion of the new driver’s 90 days. Drivers will be reimbursed for all expenses of maintaining the vans.

Drivers who have averaged at least 30 working hours per week over the past year are entitled to paid time off (PTO).  For the groups newly added to the contract, this represents an increase in the amount of PTO which cannot be taken away if a worker receives a DriveCam or write-up. Unused PTO can be rolled over to the next year or paid out when a driver requests.

The healthcare offered will continue and if the employer changes plans they must meet with the union. The existing 401(k) savings plan is now in the contract. The contract adds an additional day of bereavement leave, and adds niece and nephew to the family members included in bereavement.

Seniority will govern in layoffs, transfers, job openings, and “non-routine” job assignments, eliminating favoritism in those decisions, and all job openings must be posted. The employer must make every reasonable effort to give drivers 40 hours of work per week. In addition Renzenberger is working toward implementing a modified hiring freeze to ensure that currently-employed drivers get at least 40 hours per week.

Overtime is to be given out fairly and equally, without favoritism. Drivers are contractually entitled to two days off per week. Fairness rules for road drivers will come from free board rotation as well as provisions to protect people from fatigue and “hours” stretch out.

There is to be no discrimination on the basis of race, color, sex, age, religion, national origin, disability, sexual orientation or union activity. Management can no longer make new rules or changes without first negotiating with the union.

The contract includes a strong grievance procedure. “In-person” grievance meetings (rather than by phone) must be held at the first and third steps, which the affected drivers will be able to attend with their union stewards. The union has the option to go to arbitration on unresolved grievances. Stewards have the right to investigate and process grievances during work hours as long as it doesn’t interfere with responsibilities.

Discipline or discharge can only be for just cause. Drivers will receive notice of discipline when it is given. Workers have the right have a union steward in meetings with management that may lead to discipline. The agreement includes a three-month “wash-out” clause for discipline. After three months, a write-up drops to the next lowest level of discipline. The employer will be subject to a five-day limit for imposing discipline, unless it notifies both the driver and the union it needs more time to complete an investigation.

The company’s 36 rules for which drivers can be disciplined are consolidated into four categories that will be treated separately. This means the company can no longer mix and match disciplinary incidents for unrelated infractions to justify termination.

Drivers will be paid for and can have representation by a steward in the DriveCam review meeting which should take place during the driver’s regular shift.

The contract contains specific language to protect the rights of road drivers. They will not be penalized for failing to answer a call or respond on their day off. The employer is obligated to follow the rotation board in assigning work. Other language protects the rights of drivers on long trips.

On safety, members have the right to file grievances on any potential health and safety issue, and the company must correct the problem. The company is responsible for providing a safe workplace. The company must keep up-to-date direction books in each van or GPS devices, and if it fails to do so, drivers cannot be penalized for resulting issues. Drivers are expected to make “a reasonable effort” to change a flat tire, not “every reasonable effort.”

The contract requires the company to bargain with the union over a new cellphone policy. The union has made its position clear to the company: if cell phones are to be used for company business, the company must cover all related costs incurred by the driver. The union is committed to holding the line against drivers having to subsidize the company’s communication system.

In all, drivers in the newly organized units gained from the unity of all UE-Renzenberger workers and the achievements of previous contracts fights.  The efforts of UE leaders of existing UE Renzenberger locals in California (Local 1077) and Illinois (Local 1177) were instrumental to winning expansion of the national agreement to cover the 14 new locations. Chicago Renzenberger drivers Phil Dedera and Clarence Hill, who are the president and chief steward, respectively, of UE Local 1177, played an active role in negotiations from start to finish.