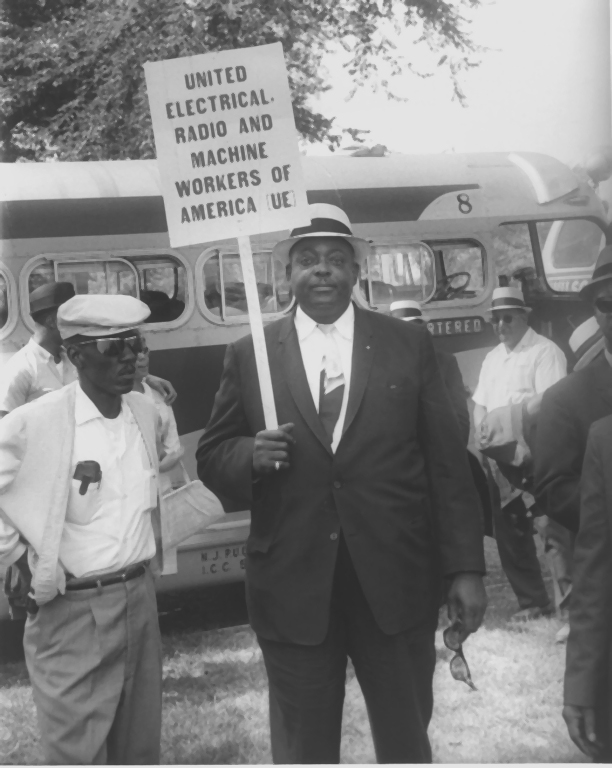 UE members at the August 1963 March on Washington for Jobs and Freedom, where Dr. King gave his "I Have a Dream" speech.
January 17, 2016

“I am certain that all men of goodwill are eternally grateful to that section of the labor movement which is working so courageously to end discrimination on the job for all people.” Martin Luther King Jr. letter to UE Director of Organization James J. Matles, November 25, 1957

The relationship between Dr. Martin Luther King Jr. and UE goes back to 1956, when King first made his mark in the struggle for civil rights by leading the Montgomery Bus Boycott in Alabama. Thanks to the folks at the Archives Service Center at the University of Pittsburgh, home of the UE Archives, the union recently learned of a letter dated July 25, 1956 and signed by King, thanking UE Local 331 in Rome, NY for its $25 donation to that campaign. The boycott started when Rosa Parks was arrested for refusing to give up her seat to a white man. For more than a year, Montgomery’s African American residents refused to ride the buses, walking long distances to jobs and other destinations, until they won a court order integrating public transit. At the urging of local NAACP President E.D. Nixon, who was also a union member in the Brotherhood of Sleeping Car Porters, the Montgomery Improvement Association had asked King, then a 26-year-old Atlanta-born minister, to lead the campaign.

It’s probable that other locals besides Local 331 contributed financial support to the campaign. UE donated to other campaigns led by Dr. King, including a 1962 push by the Southern Christian Leadership Conference (SCLC) to register black voters in the South despite violent resistance by state governments.

The 1957 King letter quoted above was in support of UE’s campaign to end racial discrimination by the Westinghouse Electric Corporation. Before the company dismantled its manufacturing operations in the 1980s, Westinghouse had been, next to GE, the largest employer of UE members, with UE locals in Westinghouse plants from coast to coast.  UE was far ahead of the rest of the labor movement in fighting employment discrimination and by 1954 the union has succeeded in including “no discrimination” clauses in 87 percent of all UE contracts. But Westinghouse was one of the stubborn holdouts, and UE leader Jim Matles had sent King a report summarizing the union’s campaign to win such a clause in contract negotiations then underway. “We feel it is the special responsibility of the labor movement to make the fight for equal opportunity for the Negro workers in the shops and to end discrimination on the job,” wrote Matles to King. “The leadership that you have provided in the struggle against discrimination of the Negro people has earned the admiration of our entire union.”

Dr. King was scheduled to speak at UE’s 27th National Convention in Long Beach, California in 1962. But his arrest by authorities in Albany, Georgia prevented his appearance at the convention, and Rev. Maurice Dawkins, SCLC representative in Los Angeles, spoke in his place.

UE turned out hundreds of members for the historic March on Washington for Jobs and Freedom in August 1963, at which Dr. King delivered his memorable “I Have a Dream” speech.

UE and Dr. King had a two-way relationship of respect and solidarity. Dr. King provided important support to UE in a a 16-week strike by members of Local 190 at Phoenix Closures in Chicago in 1966. The company hired some Black workers as scabs.

King wrote and signed a powerful leaflet addressed to the strikebreakers, warning them not to "rob yourself of our inherited dignity by scabbing." He told them that this was a union that fights discrimination, and that they were scabbing on fellow Black workers. "Today there are 37 Negroes who are members of the Union who are on strike. Their families' future, their wages and working conditions are also at stake," King wrote. "You know what you are doing is morally wrong. Scabbing will give you a reputation that all the money in the world can't wash clean."

The company later changed its name to Kerr Glass, and UE Western Region President Carl Rosen worked there in later years. The plant closed in 1994. Rosen knows the history of that strike and shared this:

“The plant was located in a working-class Eastern European area and the company had a history of not hiring any African-Americans, but when the strike got long enough they tried to hire them as scabs.  The letter from Dr. King was key at getting them out of the plant.  The strike settled the next week.  Soon after that the union took the lead in pushing the company to hire African-American employees, including helping a group of Black women go after the company through the EEOC for discriminatory hiring practices.  They eventually won both jobs and a chunk of cash, coming to be known in the shop as ‘Bonus Babies.’  Both the shop and the union leadership were well integrated when I was hired there in 1984, with some of the Bonus Babies among the local leaders.”

UE members have honored the Dr. King’s memory in many ways in the decades since his assassination in Memphis on April 4, 1968, where he was leading a campaign in support of striking city sanitation workers. Many locals fought hard, and successfully, to make Martin Luther King Day a paid holiday in their workplaces. Locals have participated in countless memorial events and marches over the years, and this year as in the past Local 150 will hold an event in memory of Dr. King and his support for labor. To UE members, honoring Martin Luther King’s legacy means continuing his struggles for equality, peace and economic justice for all.