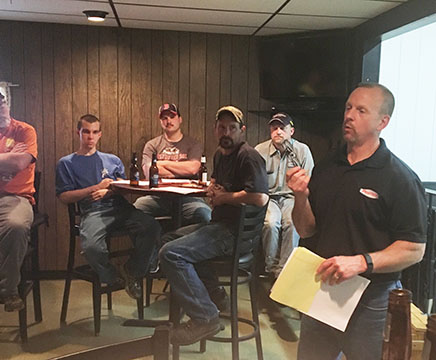 The members of Local 269 reached a contract settlement with their employer, Erving Paper, in record time and a day before the April 30 expiration of the old contract.

The three-year agreement includes 2 percent wage increases in each year of the contract, no changes to the health insurance, 20 cent weekly increases in their 401(k) supplement each year. Weekly accident and sickness coverage will increase by $10 each year, reaching $435 a week in the third year. Group life insurance increases by $1500 to $29,000 in the third year, and retiree life insurance increases to $3750. For prescription safety glasses, members will be eligible for an annual reimbursement up to $90 for single vision glasses and $100 for bifocals.

There are several improvements to paid bereavement leave, adding one day for the death of a spouse for a total of five days. Leave for the death of a child or parent is increased from three days to five, and for loss of a grandparent, the leave increases from one day to two.

The 18 maintenance workers and electricians service and maintain the paper machines and equipment at a paper mill. For the first time in many years, Local 269 negotiated ahead of the Steelworkers local that represents the production workers at the mill.  The USW contract expires in August 2016.

The company tried to get concessions from the union on vacations and future retiree’s health insurance but the local stood firm on those issues. In the previous negotiations, the local fought hard maintain the health insurance plan; the local did agree to small premium increases.

The agreement includes a health insurance reopener in August 2016, and the local has the option to reject any company proposal. The company says it is looking for ways to reduce premium costs while maintaining benefit levels and network.

Chris Carey, president of Local 269, said "The members and the bargaining committee successfully staved off serious language changes that the company wanted, and that would have given away a lot of bargaining rights for the members. On health insurance, the company stayed with the same provider, Fallon, and there's an increase in the premium paycheck deduction of $10 a week for the family coverage and $3 for single, from Fallon's premium increase in the annual insurance renewal with Erving.”