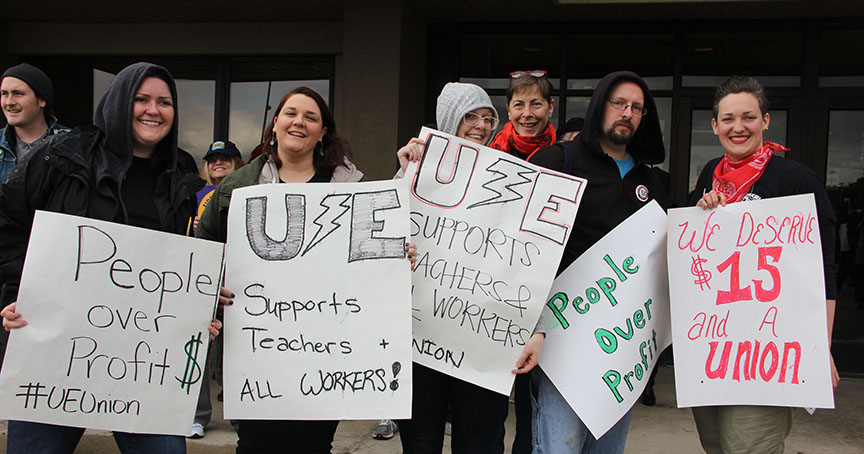 UE had a delegation of 50 people participating on April 1 to 3 in the biennial conference of rank-and-file labor activists sponsored by Labor Notes, a monthly news magazine whose goal is "putting the movement in the labor movement." There were 2,000 people in attendance this year. But before that conference got underway on Friday afternoon, UE Young Activists met among themselves on Thursday afternoon and Friday morning, learning about climate change, union struggles in Mexico, and how to make the most of the Labor Notes conference.

The conference was held at a hotel near O’Hare Airport, in the Western part of the city. But conference-goers did more than talk about their own struggles; they pitched in to help two large groups of Chicago union members in their fights. On Friday afternoon many of the delegates, including much of the UE delegation traveled to downtown Chicago to be participate in a giant march supporting the Chicago Teachers Union (CTU) against attacks on public education by Mayor Rahm Emmanuel. That same afternoon much of the rest of the conference participants, including many from the UE delegation joined in a demonstration in solidarity with service workers at O'Hare Airport. Baggage handlers, aircraft cabin cleaners, custodians, wheelchair attendants, non-TSA security officers and more had walked off the job around 10 p.m. Wednesday in a 24-hour strike for better wages and benefits.

At the kickoff plenary session of the 2016 Labor Notes Conference on Friday, April 1, participants heard inspiring addresses from rank-and-file leaders in the struggles of Chicago teachers and agricultural workers in both the U.S. and Mexico.

The conference included three plenary or main sessions of the entire assembly, in addition to a Saturday evening banquet that include the “Troublemakers’ Awards” to participants in a few outstanding labor struggles. But the most important work of the conference took place in more than 125 workshops and meetings. Two dozen of those sessions included UE members, or representatives from UE’s closest international allies, as panel members or facilitators. These covered a wide range of topics, including healthcare bargaining, higher education workers, young worker movements in unions, internal organizing in the public sector, labor and Palestine, workers in the railroad sector, and a gathering of manufacturing workers.

UE made a special effort to bring young members from all three regions to the conference. As a result some two dozen Young Activists attended, and the union took advantage of having of the presence of Young Activists from around the country with a day and a half of activities before the Labor Notes Conference kicked off. The UE Young Activists meeting included, on Thursday, March 31, education and discussion on climate change and labor. Senowa Mize-Fox, a steward in Local 203 who has studied the issue and is a climate activist, made a presentation and led discussion. The members also watched Naomi Klein’s documentary film, This Changes Everything, and talked about what they learned from it and how unions should be involve in the issues of fighting climate change and for a just transition to clean energy jobs.

On Friday morning, union sisters and brothers from UE’s labor ally in Mexico, the Frente Autentico del Trabajo (Authentic Labor Front, FAT) conducted a workshop on labor struggles in their country.  The last part of the Young Activist meeting was orientation on the Labor Notes Conference. Members reviewed the 60-page program book to help each person develop a plan of which workshops and meetings they wished to attend, in order to maximize their experience and gain valuable knowledge they could bring back to their local union.