UE's 80th Birthday: Still Militant and Democratic After All These Years 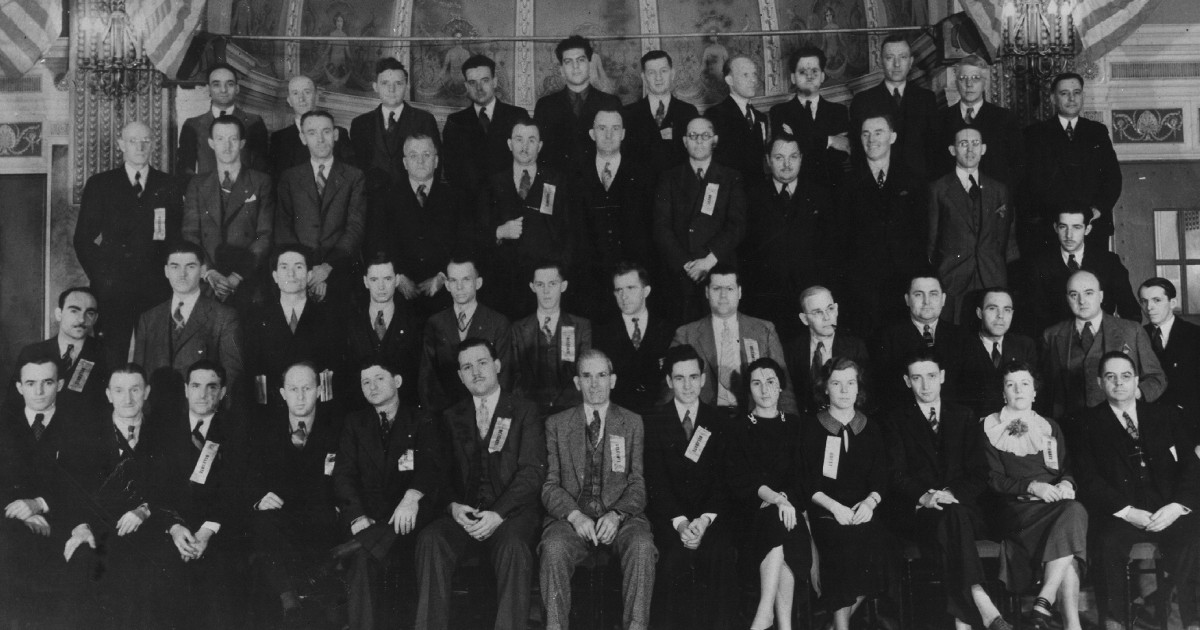 March 21 is UE’s birthday, and this year we turn 80. It was on that date in 1936 that 43 delegates from 17 local unions gathered in Buffalo for a two-day convention, and by the time they left they had created a brand new national union, the United Electrical and Radio Workers of America.

Of those 17 locals, about half were independent locals, unaffiliated before they joined UE. Most of those were at large GE and Westinghouse plants, and mainly producing heavy equipment such as turbines and generators. All of these locals were what we call today “pre-majority unions," still engaged in building their membership, not recognized by the company as the workers' bargaining representative. None of these locals had a contract.

The other locals were called federal locals: they were affiliated with the American Federation of Labor (AFL), but not as part of any national union. Federal locals were second-class citizens in the AFL, with no representation in the federation’s leadership bodies, and the AFL’s plan was to eventually carve up each of these locals among existing craft unions. The federal locals that came to UE’s founding convention represented workers who made radios, appliance and small motors. The locals of radio workers at Philco and King Colonial had negotiated contracts; the rest did not and were, like the independent locals, pre-majority organizations in their shops.

Some of these locals had been in existence since 1933, and they had tried before to join together as a national industrial union. They had formed a couple of networks – the National Radio and Allied Trades Council, and the Electrical and Radio Workers – and petitioned the AFL for a charter as a national union including both the federal and independent unions. The AFL had repeatedly refused these requests, seeing the new group as a political threat and a challenge to the AFL’s philosophy of exclusionary unionism. Most AFL unions believed in craft unionism – the idea that unions should only represent workers in skilled trades, and each craft should be in a separate union. They also practiced discrimination against women, people of color, and even against some groups of European immigrants.

So the two groups of local unions decided to move ahead. A planning committee of eight delegates, four from the independents and four from the federal locals, met in Buffalo in February to plan the founding convention of UE and issue the call.

At the founding convention delegates drafted and approved the UE’s Constitution, which has not changed very much in the 80 years since. In particular, the Preamble has stood the test of time and remains a guiding statement of UE’s philosophy.  It says “… the struggle to better our working conditions are in vain unless we are united…” It rejects “the old craft form of trade union organization” as “unable to defend effectively the interests and improve the conditions of wage earners,” and instead embraces the more inclusive model of industrial unionism.  It declares that the purpose of this union is to unite “all works on an industrial basis, and rank and file control, regardless of craft, age, sex, nationality, race, creed, or political beliefs, and pursue at all times a policy of aggressive struggle.”

That first convention also adopted a number of resolutions, made plans for organizing, decided to set up a national office in New York City, and elected the union’s first two national officers. Both were young leaders who would qualify for membership in today’s UE Young Activist Program, and appropriately, one was an electrical worker and the other was a radio worker. The first president was James Carey, age 25, from the Philco radio plant in Philadelphia, and the first secretary-treasurer was 32-year-old Julius Emspak from the GE plant in Schenctady, NY.

UE grew rapidly in its first months and years, and began winning recognition and contracts with the companies where it represented workers. On April 1, 1938 UE achieved its first national agreement with GE. The year after its founding brought UE one huge influx of new members that resulted in the only name change in UE’s history. A group of 14 machinist locals, originally independent but at the time affiliated with the International Association of Machinists, decided in 1937 to leave the IAM and join UE. They had tried, and failed, to get the IAM to drop its secret “whites only” rule, and they concluded that UE was the kind of union they wanted to belong to. This was a group of more than 10,000 members.  At the UE convention in September 1937, after these machinists had affiliated, delegates voted to create a third national officer position, director of organization, and elected the main leader of the machinist group, 28-year-old James Matles, to that job. Delegates also amended the union’s name to United Electrical, Radio, and Machine Workers of America.

UE members and leaders, throughout the union's history, have creatively applied the principles of the Preamble adopted at our founding convention. UE fought wage discrimination against women in the electrical industry during World War II with legal complaints against GE and Westinghouse before the War Labor Board. The 1946 national GE strike was extended by a couple of weeks to win an equal raise for women. Starting in the early 1940s, UE women held a series of district and national conferences "on the problems of working women," to coordinate women's rights fights in the industry. A number of women represented UE members on the General Executive Board and as organizers.

UE also pioneered in struggles for African American workers. The 1946 convention called on each local to form a Fair Practices Committee (FPC) to fight employer discrimination in the hiring, training and upgrading of black workers. The union appointed Ernest Thompson, an outstanding black leader and organizer, as full-time secretary of the UE National FPC. Thompson traveled the country, meeting with leaders of UE locals and helping them develop effective plans to force employers to hire more black workers, and to give black UE members opportunities to be trained and promoted into skilled jobs. UE also actively supported the anti-lynching movement which sought to end the murders of African Americans by white mobs, especially in the South. UE campaigned against specific frame-ups of Black Americans, falsely accused of murder and other serious felonies and facing execution. This was the "Black Lives Matter" movement of the 1930s, '40s and '50s.

UE also took seriously the Preamble’s call for no discrimination on the basis of political beliefs. In the late 1940s and into the ‘50s, UE paid a price for that principled stance. Because UE refused to join in the Cold War domestic red scare, and refused to screen our members for their political beliefs, the union was attacked by the government, employers and other unions, and suffered heavy losses of memberships. The government tried to prosecute some UE leaders for refusing to “name names” and assist in political witch hunts, as well as for taking stances on political issues (including foreign policy) different from those dictated by the Republican and Democratic parties. UE lost many locals during that period to “raids” by other unions that were aided by the government and companies.

Another UE principle that was established at that founding convention, and included in the Preamble, is that officers and staff of the union shall be paid no more than the wages of the highest-paid working UE member. The salaries of UE’s national officers match up with those of our members in GE, and the UE staff are paid somewhat less. As a result UE pays its officers far less than other unions pay, and for a reason. Having officers whose income and standard of living is that of workers, rather than that of corporate executives, helps keep the union leadership in touch with the needs of the members.

The words “rank and file control” and “a policy of aggressive struggle”, which those founding delegates approved 80 years ago, also govern the way UE operates every day. The way UE negotiates contracts, fights for members’ grievances, engages in political action is very different from most other unions. We don’t rely primarily on lawyers, legalism, lobbyists, and throwing money at politicians. Instead, UE has always believed that an informed and involved membership, mobilized in militant action to pressure bosses and politicians, is the greatest strength of our union or any union.

UE members today continue to apply the wisdom of the workers who founded our union in March 1936, and the lessons learned and passed on to us by the UE membership of the past eight decades.