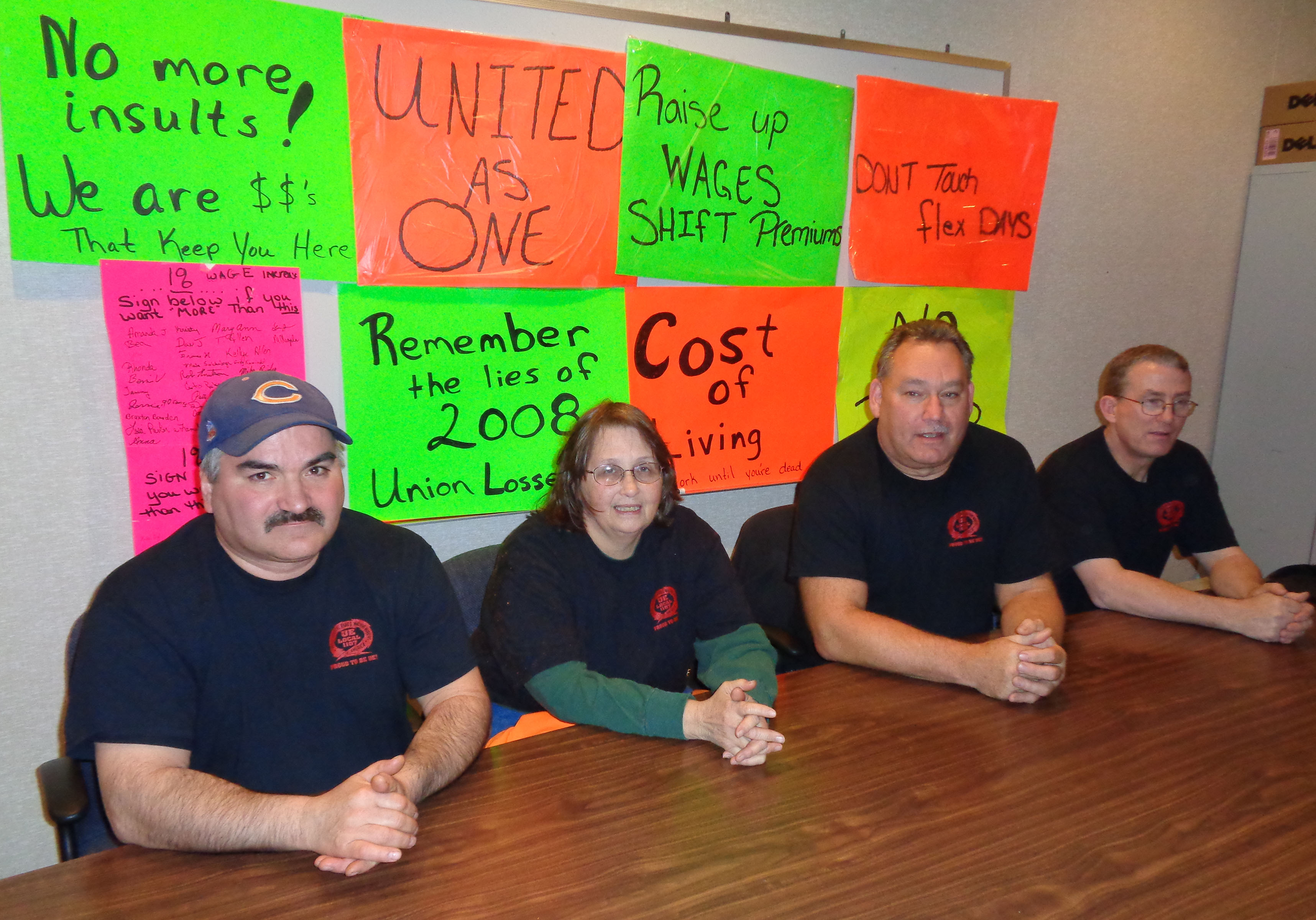 As their contract expiration neared, the bargaining committee of UE Local 1107 met with their employer, Freudenberg NOK, with a lot at stake. Wisconsin’s 2015 anti-union “right-to-work”, which outlaws union shop language in all new contracts, hung over the local’s head. A lot of new workers had been hired since spring, and almost half the work force was impacted by a divisive two-tier wage system forced on the bargaining unit during the deep downturn in the auto parts business in 2009.

But the members of this proudly rank-and-file local did not come into negotiations unprepared. For months they had been discussing in the shop and at their membership meetings that this was the year to undo the givebacks of 2009, not only the two-tier wage schedule but regaining the vacation days that senior workers had lost and the paid personal days that had been taken from the whole workforce. Plus, the members were insistent on a good raise for all. So when the company lawyer said they only had a few days available to meet, the union committee responded, “Then don't expect to go home early.”

From the first day of bargaining, the membership demonstrated their strength and unity. Almost every worker wore their union shirts in the shop and many of them let their boses know loud and clear what they were looking for in a contract, and what they wouldn’t accept.  Some members wore signs in the plant, and placed big signs on the union bulletin board. Others improvised protests involving penny jars and Legos.

The company came to the table with its own demands, looking to weaken the ability of the union to represent the membership and limit members’ ability to use flex days to avoid mandatory overtime on Saturdays. They had other proposals that would lengthen probation and weaken seniority rights. On economics, the company wanted to take away the guaranteed match on the 401(k) plan while terminating the defined benefit pension plan that had previously been frozen.  Going into the last week of bargaining, management was offering only a small wage increase and virtually nothing to restore any of the 2009 takeaways.

The union bargaining committee kept the membership well-informed of developments at the table. Three days before the end of the contract, the members really sprang into action.  The third shift started things with an early-morning protest outside the office complex where negotiations were being held. When the cops tried to chase them away, saying they couldn’t park in the lot, they moved their cars to a nearby small business that was sympathetic to the union, and returned with their signs and chants. Then the members turned their handmade signs over to the bargaining committee to post in the negotiating room, much to the unease of the company representatives. The second shift also braved the cold and rain to rally outside the bargaining site.

Back at the plant the first shift held a march and rally to make sure shop-floor management also knew what the workers wanted. Senior and junior workers marched united in all of the actions.  For many it was the first time participating in a rally. Led by some with more experience, these newer members learned the importance of speaking up and standing together.

As the pressure on the company built up, the pieces necessary for a fair contract finally came together on the last day of bargaining. With the member’s strong backing, Local 1107’s bargaining committee achieved its key economic objectives while protecting important contract language.

Over the course of the new three-year contract, the two-tier wage system will be completely eliminated with the lower tier getting an extra 20 cent raise each year and then a raise of about 50 cents shortly before the contract expires. This means all workers will be receiving equal pay for equal work when the next contract negotiations get underway. The senior workers will recoup one of their lost vacation days in 2017 and the second one in 2018, restoring their full five weeks of paid vacation.  And the entire workforce will get one additional paid personal day each year, bringing them back to their full quota of five paid personal days by the last year of the contract. In additional, all the workers will receive general wage increases of 3 percent in 2017, 3 percent in 2018 and 2.5 percent in 2019. The company will be able to turn administration of the pension plan over to a life insurance company, with the option for workers to take an early distribution, but the guaranteed match on the 401(k) plan was preserved.

On contract language, while there are some new restrictions on using flex days to avoid weekend mandatory overtime, this is at least partially balanced by workers no longer being required to use their vacation during company-designated shutdowns. In addition, the union prevented any restrictions on union rights, other than the legally required elimination of the union shop language.  But the unity and success of the contract fight made it very clear that few, if any, members would stop paying union dues.

Local President John Becerra said, “It was a tough fight, but members feel that it is the best contract ever. We’re looking forward to three good years.” Chief Steward Mike Bluell noted, “The members are the ones that did it. I’m really proud of them.”