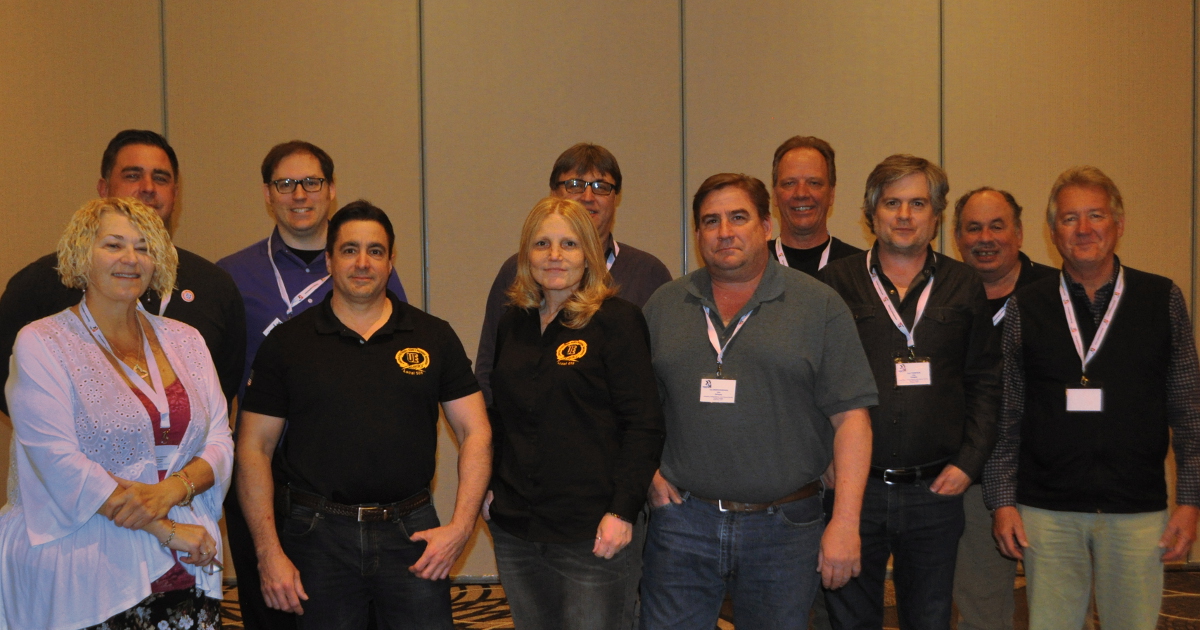 UE's national officers and members of Locals 506, 601 and 618 traveled to Toronto on May 7 and 8 for the first meeting of the global General Electric Trade Union Network, hosted by UE's Canadian partner Unifor and organized by the global trade union federation IndustriALL.

Unifor National President Jerry Dias and UE General President Peter Knowlton welcomed delegates representing GE workers from 10 countries. Dias warned of world-wide attacks on working people and our communities, and blasted GE's role in devastating communities economically and environmentally. “Not only do they kill their communities, they kill the workers that they leave behind.”

Knowlton described how GE brought dozens of managers and Human Resources people from around the country to browbeat workers during a UE organizing drive at a GE shop in Houston, and stressed the importance of international solidarity to support GE workers and force the company to recognize their right to organize.

Local 506 President Scott Slawson spoke on a panel comparing the situation at GE workplaces. He described GE's deliberate strategy of de-unionization and creating fear. “It's not just about job security,” he said, “it's about fear, it's about an uncertain future, it's about a lack of commitment to communities, to employees and their families.” However, he proclaimed that GE workers should not be afraid of the company because “in a news flash: we outnumber them.” He asked all shop floor workers at the meeting to raise their hands because, as he said, while we need to take on the company globally, “action starts at the shop level.”

A group of speakers from Unifor, including second-generation GE worker and retiree Sue James, spoke on a panel about the consequences of GE operations on occupational health and safety and the environment. They described the experiences of workers in GE's Peterborough, Ontario plant — now being closed by the company — discovering that they were working with toxic and carcinogenic chemicals. “In about 1994, it really struck me when I began to see clusters of people dying of heart disease or cancer in their 40s,” said James. “We all started to look around saying we're going to funerals all the time and we're just kids in our 30s and 40s.”

James likened the effects of GE’s toxins to “a blanket of grief” sitting over her community. She described the company’s attitude as “we're going to just wipe our hands and leave this community to mourn.”

Introducing the panel on occupational health, Brian Kolher, IndustriALL’s Director of Health, Safety and Sustainability, slammed GE’s “insatiable appetite” for contracting out work, which increases health and safety risks to workers. Globally, he said, 2.3 million workers die as a result of their work every year, according to the International Labor Organization (ILO). IndustriALL considers this number, shocking as it is, to be underestimated by at least a factor of ten. Many millions more are injured or made ill due to occupational disease. In fact, 80% of the harm done to workers is due to diseases such as those suffered by Peterborough GE workers, with only 20% due to accidents. Retired Unifor Director of Strategic Planning Fred Wilson spoke about the need to include the survivors and victims of the toxic dumps GE has left behind, noting that there are 600,000 GE retirees in North America.

British GE worker Steve Kerr shared with the delegates the plans to convene a European-wide “works council” of GE workers. In the European Union, all companies that employ over 1,000 workers in the EU, with at least 150 employees in two or more EU member states, are required to create a European Works Council (EWC) to which their workers elect delegates. The company is required to have senior management meet with the works council at least once a year, cover the travel, hotel and interpretation costs, allow worker representatives to be assisted by union officials and inform and consult with the works council on a wide range of issues.

In 2014, GE had five separate EWC’s in Europe, most inherited by the company through acquisitions, but there was no central coordination and not all workers were covered. “Trying to get the information from the company was incredibly difficult,” said Kerr. “It was like the wolf inviting the lamb over for dinner.”

From 2015 through December of 2017 European unions negotiated with GE over the creation of a central EWC, to which workers are currently electing representatives. The first full meeting of the central EWC committee will be held in September, and Kerr suggested that the powerful European unions had an interest in acting in solidarity with North American workers. “GE has a fear of North American workers organizing,” he said. “Let’s not be a little island in Europe,” Kerr exhorted the delegates. “GE works globally, so should we.”

Other European trade unionists also expressed their shock at the way GE treats North American workers. Reflecting the higher respect GE pays to its European unions, Marco Spengler from the German union IG Metall said that he didn’t understand why GE representatives, who were invited to attend part of the meeting, did not show up. If unions had invited GE representatives to a meeting in Germany and they hadn’t shown up, it would be “scandal,” he said.

“We have to defend employment where GE has made investments and has responsibilities,” declared Stefano Maruca from the Italian union FIOM. FIOM’s Daniele Calosi added that behind GE’s job cuts are “people, human beings with jobs.” He suggested that in a globalized world GE needs to answer to the world for its business practices.

Gregor Pastor, from the French metalworkers’ union affiliated with longtime UE allies CGT, said that “the real issue for us is how are we going to work together and have a common vision of how every GE worker around the world can work in dignity.” Unions can establish worldwide standards for decent work, he suggested, and then monitor the company to figure out whether GE is complying with them. “Let's face it openly and proudly,” he said, “we are representatives of workers and we will not hesitate to fight.”

Local 618 President Janet Gray said the meeting showed her that “we all fight the same fight and this meeting was an incredible display of solidarity. I continue to be amazed that the story is always the same. No matter who you meet, GE is leaving environmental and economic devastation in their wake. There is no commitment to employees or communities, not just in North America, but around the world.”

Local 601 President Steve Gallagher said that the GE Trade Union Network would be helpful in future dealings with General Electric management in North America and across the globe. “GE management has intensified its attacks on sustainable jobs in many countries and disrespects its long-term commitments to its employees in the communities where it operated. It's time for GE workers to unite and be heard.”