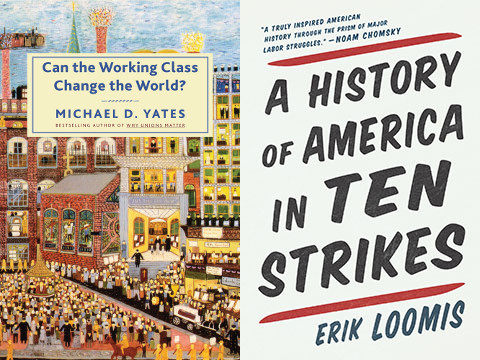 If you have ever felt overwhelmed by the problems facing working people on seemingly every front, economist and labor educator Michael Yates has written a timely book. In Can the Working Class Change the World? he makes the case that the working class — and only the working class — can indeed overcome economic inequality, eliminate racism, sexism and other forms of discrimination, and meet the challenge of environmental degradation and climate change.

Yates gives an in-depth international and historical context for the struggles working people face every day on the job and in our communities. The first half of the book gives an overview of the global makeup of the working class, and the social and economic conditions workers face under capitalism. He pulls no punches about the nature of the political and economic system we live under, and the misery that it causes working people around the world. Yates also describes how racism and sexism make conditions worse for women and people of color and also divide the working class, making it harder for any working people to improve their conditions.

In the second half of the book, Yates tells the story of the gains that working people have made in every country in the world by organizing unions and working-class political parties. Despite these gains, workers everywhere are facing demands for givebacks and austerity in both contract negotiations and the political realm because, as the title of Chapter 5 states, “The Power of Capital Is Still Intact.” Yates argues that it is only by attacking the power of capital “head-on, on every front, all the time” that we can build “a fundamentally new society, one with grassroots democracy, economic planning, a sustainable environment, meaningful work, and substantive equality.” (p. 8)

Although we rarely learn about it in school, own country’s history is full of examples of working people struggling to improve our conditions and change the world — and sometimes winning. Historian Erik Loomis’s A History of America in Ten Strikes is an original and engaging way to re-learn U.S. history through the lens of working-class struggle.

Each of the ten chapters uses a pivotal strike to tell the story of the economic, social and political changes that defined its era. Starting with the “mill girls” of Lowell, Massachusetts in the 1840s and the general strike of enslaved African-Americans that provided victory to the Union in the Civil War, Loomis is always attentive to race and gender, and he does not hesitate to discuss the racism and sexism that has plagued the U.S. labor movement.

In his chapter on the “Bread and Roses” strike, Loomis makes an important point about the Industrial Workers of the World (or “Wobblies”) that is often overlooked. The radical IWW, founded in 1905, sought to organize all workers into “one big union,” and challenged the many prejudices of the skilled, mostly white and male members of the craft unions that made up the American Federation of Labor, much as the UE and other industrial unions would do decades later. However, the IWW’s “unwillingness to build long-term worker organizations” and do ongoing education with newly-organized workers meant it was unable to consolidate its victories. After winning the Bread and Roses strike in Lawrence, Massachusetts — workers won wage increases between five and 20 percent, and all strikers were able to return to work — the union fell apart in two years:

The mill owners eventually repealed what they had given up in the face of public pressure. Unionization was new to the workers. They did not know how to maintain their power. Without the Wobbly leadership, the workers were divided by their ethnicity — a split encouraged by the employers. Union leaders were fired and blacklisted. (p. 104)

Ten Strikes is also a good reminder of the amount of violence working people have faced throughout American history — both the violence of their working lives and the brutal violence that both employers and the government have used to crush unions. Loomis makes a convincing case that workers have been most successful in improving their conditions when they have used political action to elect state and federal governments that will support unions. His chapters on the Flint sit-down strike (1937) and the Oakland general strike (1946) are eloquent testimonies to what the labor movement, led by industrial unions like UE and with support from New Deal politicians like Franklin Roosevelt and Michigan governor Frank Murphy, accomplished in the 1940s: “Their struggles led to blue-collar workers living lives of luxury they could not have imagined twenty years earlier, including home ownership, car ownership, and paid vacations.” (p. 154)

One of the most fascinating chapters of the book is the chapter on the Professional Air Traffic Controllers Organization strike in 1981, the “greatest defeat in American labor history,” when newly-elected President Reagan fired 11,345 striking workers. Loomis tells the complicated backstory of this relatively young union, formed in 1968. Air traffic controllers had incredibly stressful jobs — and a lot of power when they held or even threatened job actions. PATCO was democratic and militant, but also largely indifferent to the broader interests of the rest of the working class, and their membership were overwhelming white, male workers who were “often racist and sexist towards co-workers.” (p. 187) In the final irony, PATCO endorsed Reagan in the 1980 presidential election.

Yates reminds us that winning a just society requires a shift from the “I” of capitalist individualism to the “we” of the families, communities and unions that working-class people rely on to survive. In the introduction to his final chapter, he quotes at length from John Steinbeck’s novel The Grapes of Wrath a passage about how when two homeless men, both driven from their land during the Great Depression, “squat on their hams” and talk, “I lost my land” becomes “We lost our land.”

While Can the Working Class Change the World and A History of America in Ten Strikes are each worth reading alone, they also complement each other, with Yates providing a global and historical context for the strikes Loomis describes, and Loomis providing a wealth of concrete examples of the broader trends Yates discusses. Both books are important tools for working people to understand our history and the world we live in, so that we may make our own history and change the world.