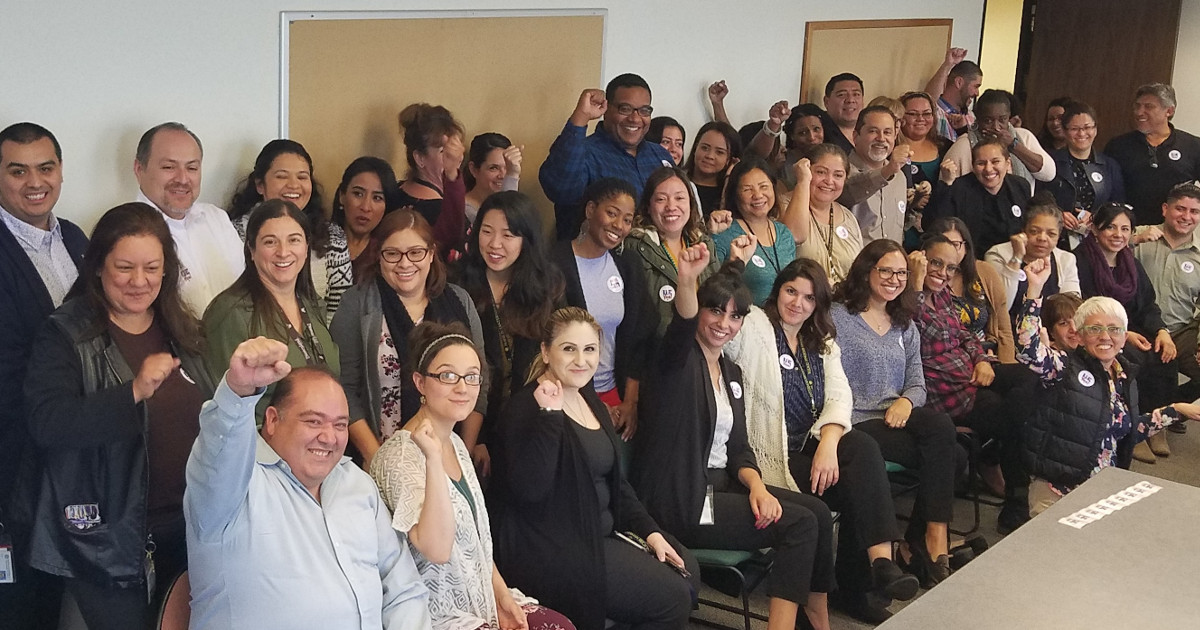 Tired of short staffing and arbitrary management decisions, workers at the Frank D Lanterman Regional Center in downtown Los Angeles voted 113-55 on March 22 to join UE. Lanterman staff coordinate critical services for individuals with developmental disabilities, providing social work, advocacy, and support services that allow clients to live normally in the community. They organized for better staffing and client care, and to have a voice to speak up against disrespect from management and retaliation against staff who advocate for clients or take sick time.

Since a new director took over the center about a year ago, the agency had gone from being client-focused to being numbers-focused, many workers felt. There is a law in California mandating maximum client loads of 66, yet Lanterman workers reported an average load of 85, with some having as many as 100.

Although Lanterman workers have generous sick leave on paper, management had recently implemented a policy requiring them to give notice before being sick — a policy that was inconsistently communicated to workers and which could potentially affect their merit pay increases.

There were also multiple reports of workers being called into the office and berated, in some cases so badly that they came out crying.

A group of workers wrote a six-page letter to management outlining their concerns and presented it to the associate director, but never received a response.

Realizing they needed to organize to get management to take their concerns seriously, Lanterman workers contacted UE Field Organizer Fernando Ramirez. Fifty people out of a unit of just under 200 came to a meeting to learn about organizing. They quickly formed an organizing committee and signed up their co-workers. “The committee really drove it,” commented Field Organizer Sean Fulkerson, who worked on the campaign.

As the union election approached, management asked workers for a “second chance” at a captive audience meeting. Asked about the six-page letter of concerns, the director swore up and down that she had not received it. When the organizing committee produced evidence that she had, in fact, received a new copy of the letter via email several days before the meeting, management’s hypocrisy was exposed.

On the day of the vote, the organizing committee had recruited 25 Get-Out-the-Vote captains, who made sure every pro-union worker voted early in the day.

Organizing with UE has changed the environment in the shop. “Everyone tells me that they’re very happy that I was very strong and they started calling me Dolores Huerta at work,” said Lanterman worker Fatima Anda told delegates to UE’s Western Region meeting in March, days after the vote. “I want to really thank you guys for believing in us because we felt like no one did.” (Dolores Huerta was the co-founder, along with Cesar Chavez, of the United Farmworkers union.)

“People throughout this process have become more militant, they’ve lost that fear that they had,” said Marc Baca, one of the workers who originally contacted UE. “This campaign essentially brought back the sisterhood and brotherhood that we used to have, the sense of family … it is the best thing that has ever happened at Lanterman.”