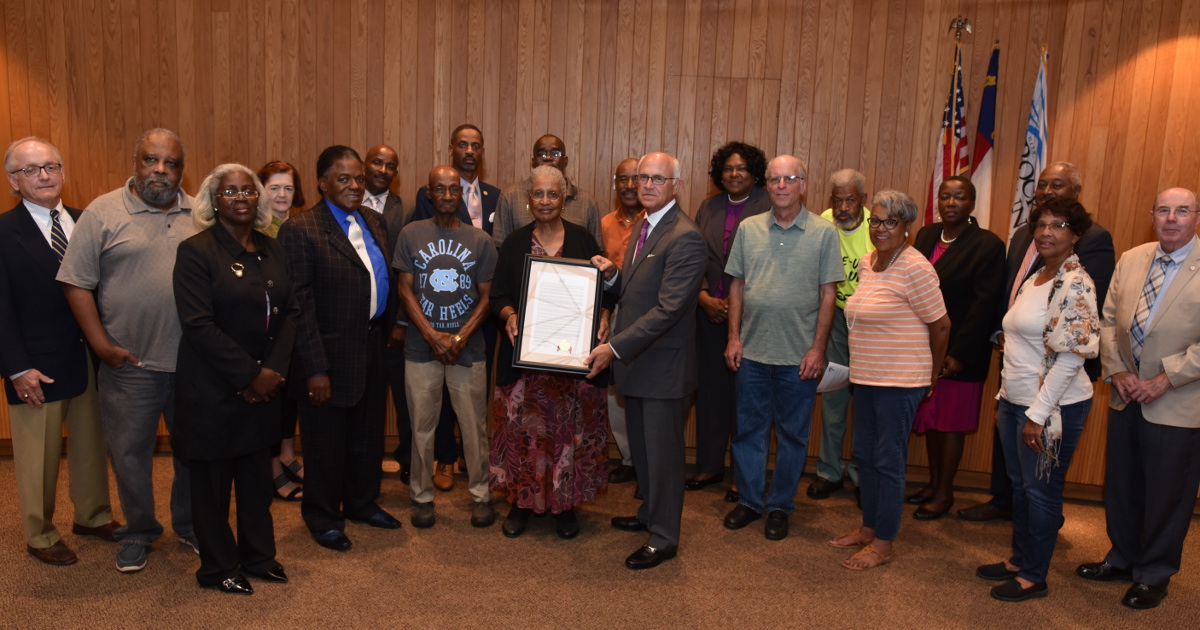 Almost 100 people attended a program marking the 40th anniversary of the 1978 Rocky Mount Sanitation Workers’ Strike, sponsored by the Phoenix Historical Society at BTW Community Center on Saturday, October 13, 2018. A highlight of the program was the reading of a city council resolution, passed earlier that week, recognizing the strike and honoring the courage of the workers. Read by PHS member and city interim planning director JoSeth Bocook, the resolution ends with:

Five of the former workers from 1978, Leonard Giles, Willie Moody, Robert Smith, English Edmondson and Rudolph Edmondson, as well as Marjorie Evans, widow of Alexander Evans, were present to receive the apology and copy of the resolution from Councilman Reuben Blackwell. Leonard Giles, the strike leader in 1978, spoke for the workers. To explain their action to go on strike in defense of Evans, their wrongly accused co-worker, Giles made Biblical reference by saying “Yes, we are our brother's keeper.” Giles remembered “When we went on strike, the first person to come to us was Naomi Green. She told us to stick together and it was time someone stood up to the city of Rocky Mount.” Green was the local leader of Southern Christian Leadership Conference, which came to the aid of the sanitation workers.

Richard Petway spoke on behalf of the Rocky Mount City Workers Association-UE Local 150, which claims its origins in the 1978 strike. Petway urged the city to meet and confer with the Union to resolve issues with city workers and called on the city to agree to allow voluntary payroll deduction of union dues, as other cities in North Carolina have.

Panel speaker Sue Perry Cole, former director of Eastern Carolina Legal Services, recalled the leadership of Naomi Green in the 1983 voting rights suit that led to a fair and racially balanced ward system for the election of the Rocky Mount city council. Sue Perry Cole also recalled the service of the late Antonia Lawrence, who along with Quentin Sumner served as Evans' attorneys in the 1978 case. PHS member Doris Stith, who chaired the program, read a statement from Sumner, now a Superior Court judge, in which he called Evans a “legend of the workers' rights movement.”

Panel speaker Saladin Muhammad of Black Workers for Justice and UE Local 150 called on city manager Rochelle Small-Toney to distribute a copy of city council resolution on the 1978 strike to all city employees. Muhammad also recalled that the 1978 strike influenced the struggle of Rocky Mount K-Mart workers in 1981 and the formation of Black Workers For Justice with Alexander Evans as first chairperson. Muhammad also noted that three members of the BWFJ joined Naomi Green as plaintiffs in the 1983 voting rights lawsuit, which is also seen as an outgrowth of the 1978 strike.

Rev. Thomas L. Walker, who was the leader of the Concerned Citizens Association that supported the striking workers, said he learned from the strike that “when the mayor or city manager doesn't come to work, no one notices; but when the sanitation workers don't come to work, the city comes to a halt. It is truly the blue collar, hard hat workers who make the city run.”

The Phoenix Historical Society gave special recognition to Alexander Evans (1934-2007) and Naomi Green (1930-1999), who played key roles in the 1978 strike, for their lifelong service as outstanding freedom fighters in the Nash and Edgecombe County area. Evans' widow Marjorie and Green's daughter Jean Ann Pryor accepted on their behalf. In addition to serving as first chair of BWFJ, Evans was also a leader in the Bloomer Hill Community of Whitakers. Green is recognized as Rocky Mount and Edgecombe County's foremost champion of civil rights, workers’ rights and welfare rights.