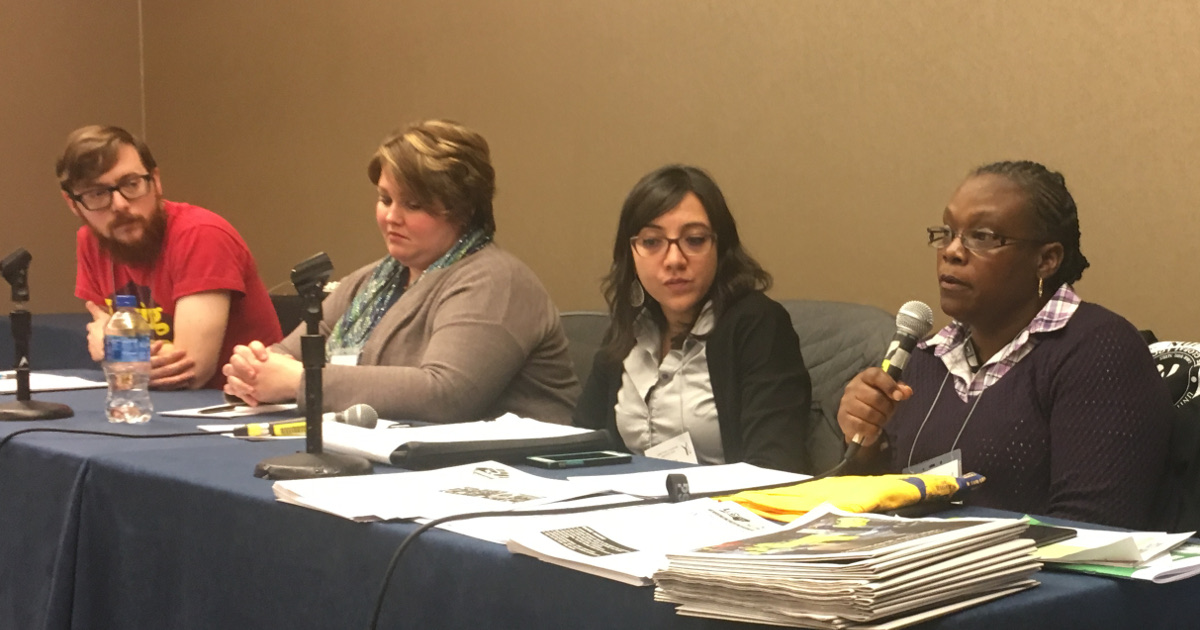 Local 150 member Bonita Johnson (right) speaks on a panel on "Bargaining without Collective Bargaining"
May 4, 2018
Chicago

The magazine Labor Notes has been helping rank-and-file workers “put the movement back into the labor movement” since 1979. On April 6, 7 and 8, almost 50 UE members and staff joined over 3,000 people at the largest and most dynamic Labor Notes conference ever.

It was “an incredible opportunity,” Local 203 President Ben Cohen told the Northeast Region during a report-back at the regional council meeting later in the month. “It just shows that we are at the forefront of democratic, member-run union in this country.” Local 255 steward Andrew Sullivan added “On two different occasions members of other unions stopped me just because they saw my [UE] sweatshirt,” and told him, “you guys really have a great union.”

UE members spoke at a number of panels and workshops. UE General President Peter Knowlton and Local 255 President Autumn Martinez spoke on the panel “Bargaining for Health Care in the Trump Era,” organized by the Labor Campaign for Single Payer. Knowlton described how UE locals have been using healthcare bargaining to point out the need for a single-payer, Medicare-for-all health care system to their members, bosses, and the community.

Martinez described how her local has been “militant in drawing a line in the sand, pushing back and making sure our members are taken care of” on the issue of healthcare, and are pressuring their employer — who regularly demands that UE members pay a portion of the healthcare premium “on principle” — to instead co-sign a letter in support of a single-payer healthcare system, so no worker would have to pay insurance company premiums. “We have been fortunate enough to be members of an amazing organization such as UE that empowers its members to push back and fight for something that should be a basic human right such as health care.“

Local 150 leader Bonita Johnson brought Local 150’s two decades of experience representing public-sector workers without collective bargaining rights to “Bargaining Without Collective Bargaining.” She described how Local 150 members win justice on the job by organizing petitions, rallies, meetings with legislators, “whatever it takes to fight the fights that we’re fighting.” She emphasized the importance of the union being visible in the workplace, so other workers “know we exist,” and of having “small little victories” to demonstrate the importance of the union. “We actually have to gather up our members and bring them out,” she said, because “our power is in the number of people” the union can mobilize.

Local 1110 President Armando Robles and Local 1110 member Luis Cruz spoke on a panel on Worker Cooperatives. Robles and Cruz are members of New Era Windows Cooperative, formed by UE Local 1110 members after twice occupying their plant, Republic Windows and Doors. Robles told the audience that UE’s commitment to member education and to supporting the development of leadership in UE workplaces is what gave Local 1110 members the skills and confidence to take over their workplace and run it themselves.

Daniel Campos, Local 1123, shared his experiences traveling to Mexico last summer to meet with Mexican trade unionists on the panel “Taking on NAFTA in the Trump Era.” He expressed his frustration that deals like NAFTA allow corporations to profit off of Mexican workers who are living in poverty.

UE staff also played a role in bringing UE’s rank-and-file message to Labor Notes attendees. UE Co-Director of Education Kari Thompson presented the new UE workshop “Responding to Sexual Harassment in the Workplace (and Your Union),” and in her other role as Director of International Strategies, moderated the panel “Asian Unions Vs. Militarism” with longtime UE ally Zenroren from Japan. UE International Representative Mark Meinster spoke about the work of UE and Warehouse Workers for Justice on the panel “Labor’s New Sources of Leverage.”