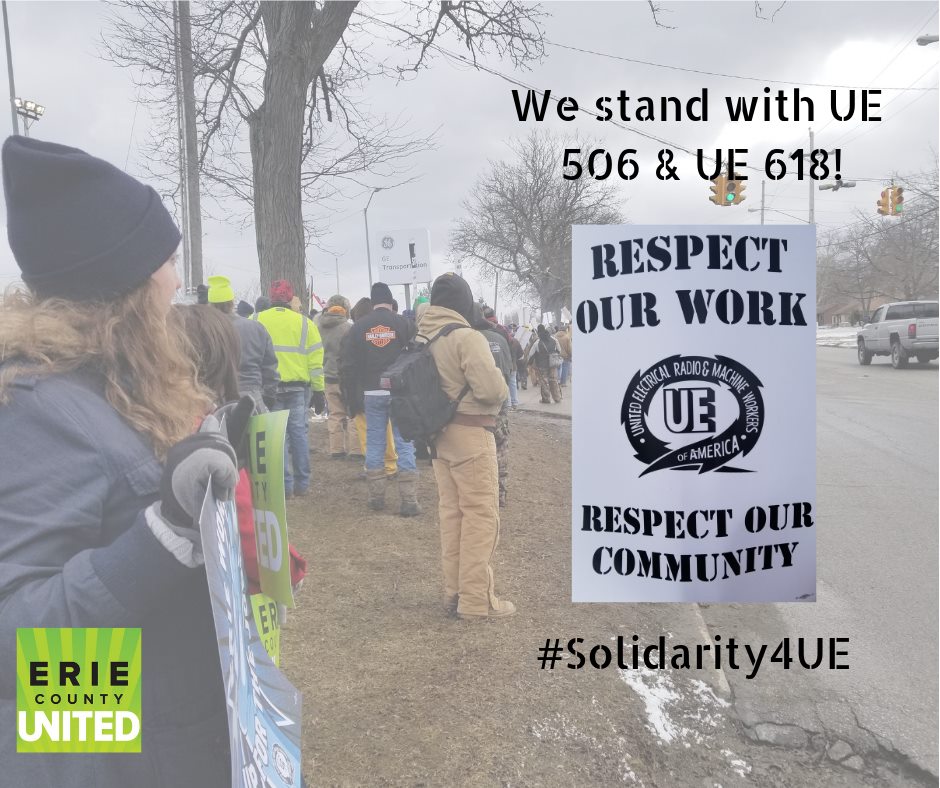 The strike by members of UE Locals 506 and 618 against the massive concessions imposed by Wabtec when they took over the locomotive plant on Monday immediately drew national (and international) attention. The Pittsburgh Post-Gazette, Wall Street Journal, CNN, Huffington Post, The Nation, In These Times, CBS News MoneyWatch, Yahoo Finance and more all ran stories on the strike on Tuesday, the day UE members walked off the job and set up picket lines at the former GE Transportation plant in Erie. 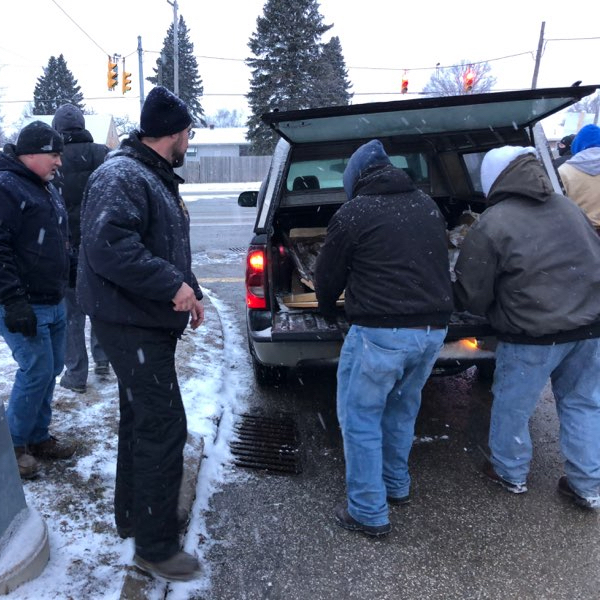 Wood and donuts being delivered to the picketline

The strike has generated an outpouring of support from the Erie community. “The community is being incredibly supportive,” says UE General President Peter Knowlton, who is in Erie to support the strike. “People just stopping by dropping off coffee, donuts, food, and wood for the burn barrels. This is a fight of a small city in the rust belt taking on a greedy corporation.” Community members, including Erie County United, an organization that fights for family-sustaining jobs and strong communities, stood with UE members on the picket lines in the cold and snow yesterday.

The Erie community also demonstrated their support on social media, sharing a graphic made by Local 506 declaring “UE is my union, my neighbor, my kid, my aunt, my town, ME” almost 600 times on Facebook.

Support has come from outside Erie as well, from both political and labor leaders. U.S. Senator and presidential candidate Bernie Sanders released a video, “CEO’s are Ripping Off Working Families,” which highlights the UE strike in Erie, stating “The fight that they are fighting in Erie, Pennsylvania is a fight that reflects the needs of millions of workers throughout this country.” Sanders wishes UE members “the best of luck in their struggle” and urges Wabtec to come back to the table and “treat their workers with respect and dignity.”

Sending support to 1700 members of @ueunion Locals 506 & 618 in Erie, PA on strike against new boss #Wabtec after the company tried to bring back laid off workers for 40% less pay, lowered pay for new hired & temps and demanded mandatory overtime. #Solidarity pic.twitter.com/AE4vqpUyRP

Sara Nelson, the President of the Association of Flight Attendants who attained national prominence by calling for a general strike to end the federal government shutdown in January, also took to Twitter to offer support UE members:

An injury to one is an injury to all. @afa_cwa stands with the strikers. We've got your back, @ueunion. #1u https://t.co/I6dTl0G3Xe

Summer Lee, a Pennsylvania state representative whose district includes Wilmerding, where Wabtec’s corporate headquarters are located, noted that the UE locals are striking to “maintain the wages and working conditions ALL employees deserve”:

UE was the 1st &only labor union to proudly stand by me before my candidacy was respected by the establishment.

Now I proudly stand in support &solitary w/Locals 506 & 618 as they strike against new boss #WABTEC to maintain the wages and working conditions ALL employees deserve https://t.co/JPi3cLvP8G

Wilmerding is also the home to UE Local 610, which represents Wabtec workers at two plants in Wilmerding and Greensburg. Local 610 President Antwon Gibson wrote to Wabtec CEO Raymond Betler, telling him “we will provide our full support and solidarity to our UE brothers and sisters to ensure that they achieve a fair and equitable collective bargaining agreement.” During a company meeting about the merger yesterday, Local 610 members wore UE t-shirts (including some Local 506 t-shirts) and stickers to demonstrate their solidarity with Erie UE members. Local 610 will be entering negotiations for their own contract with Wabtec this spring.

Other UE members, from Vermont to California, posted and sent photos of themselves with signs expressing their solidarity with the Erie strikers. 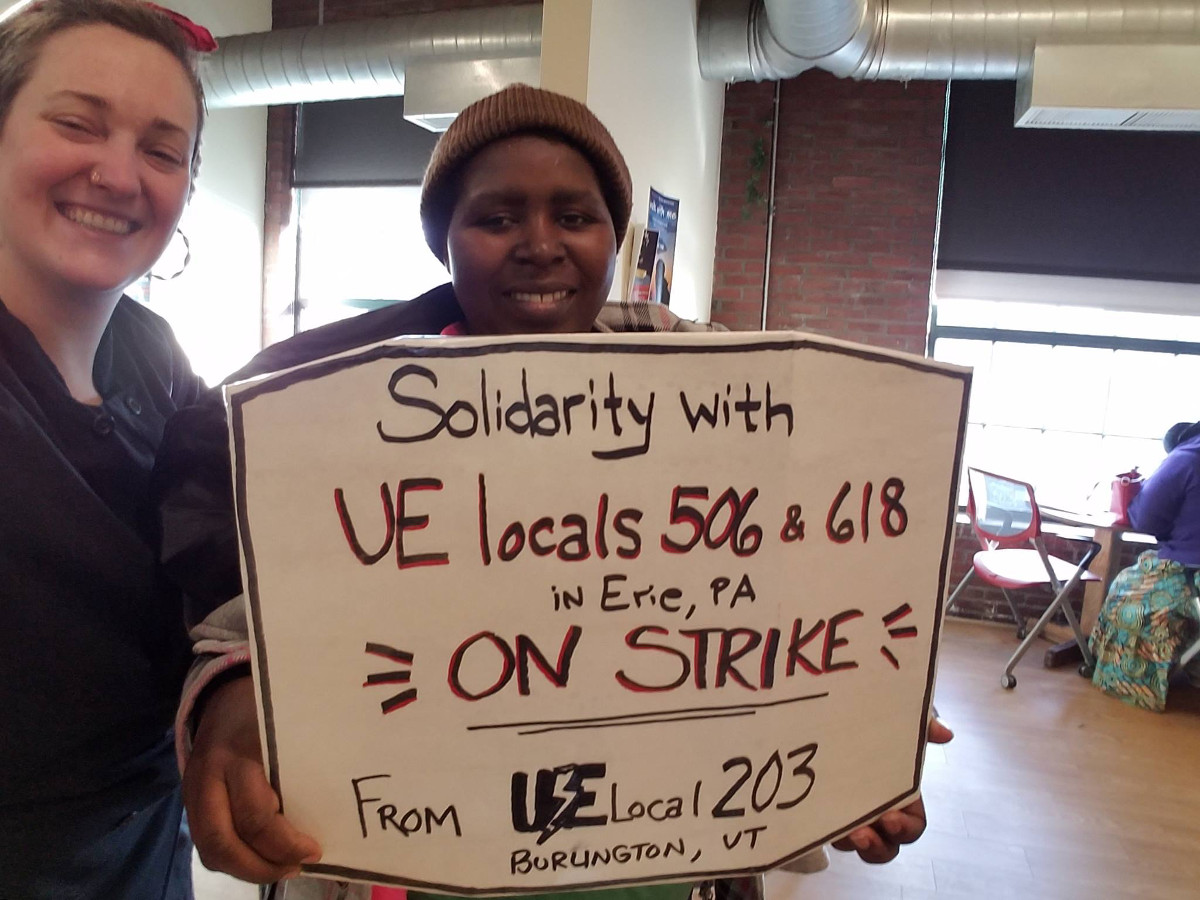 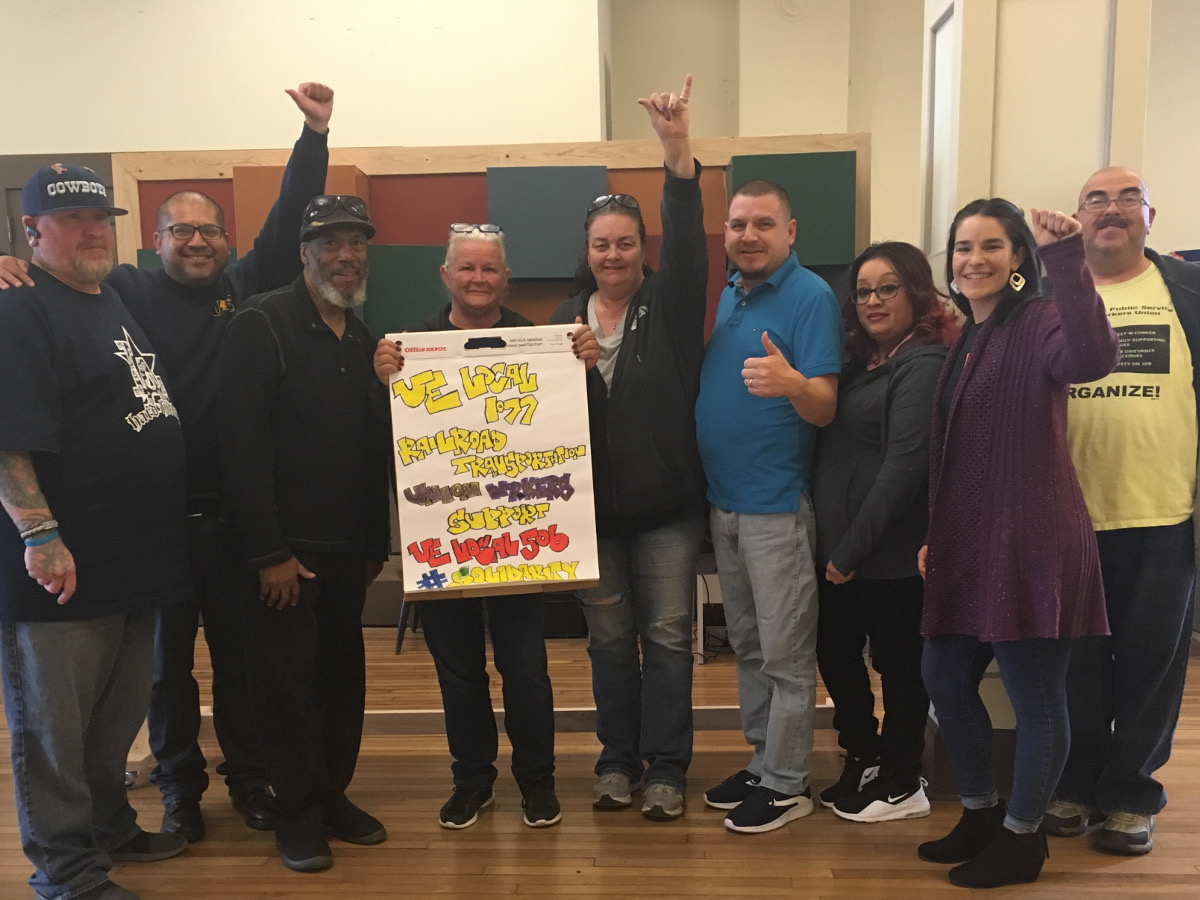