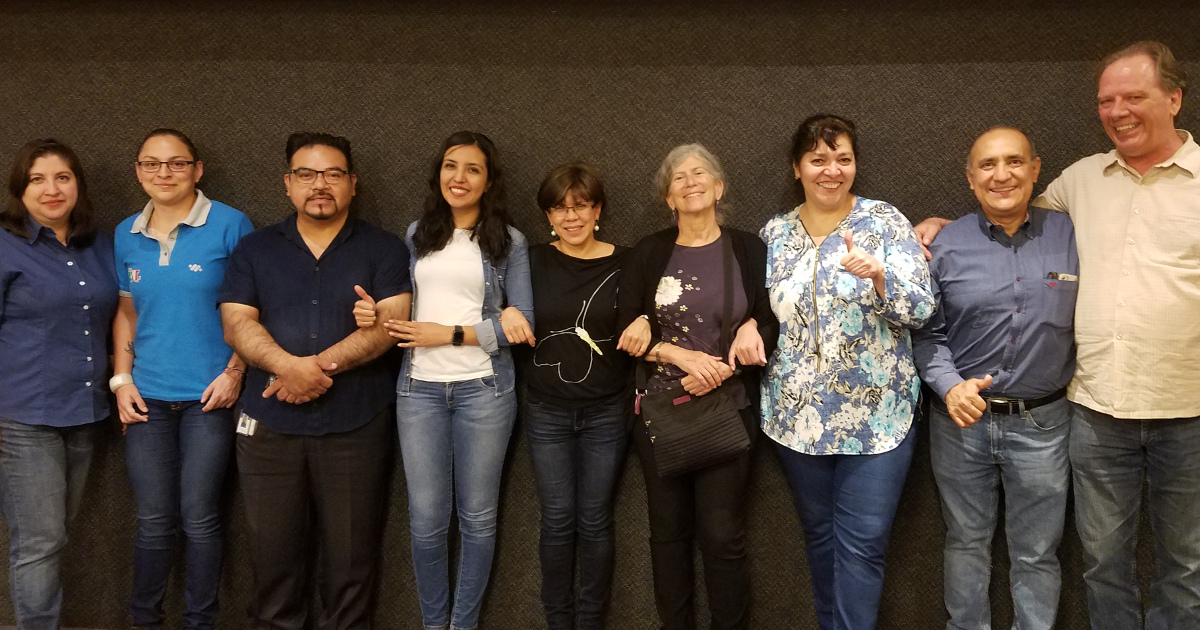 On July 5 and 6 the Frente Auténtico del Trabajo (FAT), an independent, democratic Mexican union and one of UE’s closest international allies, hosted a forum in Mexico City entitled “Federal Labor Law Reforms: Perspectives and Challenges.” The labor law reforms enacted on May 1, 2019 by at the behest of the new, pro-worker government of Andrés Manuel López Obrador were described by a variety of speakers as “historic,” and “huge.” Manuel García Urrutia, a former leader of the FAT who now holds a prominent position within the Secretariat of Labor, commented that “many of our dreams have been captured in this law.”

The forum was divided into four panels, with the FAT’s four-member national leadership moderating. The audience was largely composed of representatives from FAT-affiliated unions from throughout the country, representatives of other independent unions, as well as workers interested in organizing democratic unions in their workplaces.

On the first afternoon three groups of workers provided moving accounts of their struggles to build rank-and-file, democratic unions in a country where most “official” unions are undemocratic and do not serve the interests of the workers. Three young workers from the FAT-affiliated union at MetLife described the history of their union’s struggle to become independent. After pro-democratic workers obtained leadership positions within the existing official union, 326 of the 327 workers voted to become independent. The leaders were fired after the official union demanded the employer discharge the entire executive committee. Their original employer, a government entity, was privatized but the ultimate victory was successfully preserving their union. They noted the important role played by the UE in obtaining financial information about MetLife, that was unavailable in Mexico.

Union officers at the Tornel tire factory gave a compelling account of how they organized in 2008 after winning the officer elections of the official union. The official union forced a union vote and the independent union won by a large margin despite huge obstacles. Leading up to the vote the company changed people’s jobs, moved workers between the three plants, and used company goons to intimidate workers to vote against the independent union. Workers were required to publicly state before representatives of the company and the official union how they were voting.The official union was able to force them to go through two more elections, each of which they won by a greater margin — the third election by a vote of 1013 to 3.

The company threatened to close the plant, fired workers, and corrupted their general secretary, but the next time there were union elections, rank-and-file workers successfully challenged the corrupted leadership with a new slate of officers. One of those officers, Roberto Gutierrez Cortes, reported that in the negotiations last February they “recovered some things and little by little we will win back more.”

The third example was DMI, a sister shop to former UE Local 715 in Ohio. The workers spoke about how bad the working conditions had been and how the official union representative was only there to help the company, “to collect dues money and do nothing when someone was fired.”

During their organizing campaign workers were threatened and fired. Eventually, an election was ordered, but the workers were not told about it. Thirty workers were notified they would be going to a training but when the workers took the bus it went to the labor board for the vote. One of the supporters of the FAT had been one of these workers and had previously passed the word to the FAT about what was really happening. The FAT arranged for workers to travel by metro and remain hidden in the metro station until the hearing began so that they could show up at the appropriate time and be allowed to vote. The workers won the election 54 to 10, but they were forced to go through more legal proceedings and a second election before they were finally recognized by the company. They reported they now have a six person leadership, have won significant wage increases and make the company respect the contract. One of the leaders reflected “it wasn’t easy and we needed to do it in secret but when there is unity anything is possible.”

On the second day of the forum, prominent democratic and independent labor attorneys and social scientists discussed the history, content, and accomplishments contained in the new law. It included a section on international solidarity and provided an opportunity to discuss some of the challenges being made to the law by official unions, and to outline a plan of action.

Arturo Alcalde Justiniani started off the day by describing the decades of effort that resulted in the reforms. Those who spoke about the need for secret ballot elections, transparency, or a trusted arbiter to replace the tripartite labor boards that were institutionally stacked against workers, were once considered crazy, he said. In Mexico unions must obtain registrations to represent specific types of workers, and he mentioned an early meeting where all twenty unions present had been forced to appeal to the courts to get their registrations. In a country where 92% of collective bargaining agreements are “protection contracts” that lock in federal minimum wages and working conditions and prevent independent workers from having representational rights, the challenge was to create requirements that would give workers a real choice.

“Today, most workers don’t know their union, don’t have their contract, haven’t seen their representative, don’t have meetings and don’t know what happens to their dues,” said sociologist Saúl Escobar Toledo, “so the challenge is to create a new labor culture.“ According to Escobar Toledo the new labor law was the result of years of struggle by Mexican workers, international pressure, national discontent, and the realignment of forces that resulted in the MORENA victory in the 2018 elections.

Some parts of the new labor law became effective immediately and other sections will be phased in over time. As material developed by the FAT explains:

[The new law] gathers the historic demands of independent and democratic trade unionism, including the elimination of the Conciliation Boards and the transfer of labor justice to Tribunals within the judicial branch. It incorporates measures through which workers really decide to which union they wish to belong, who will be their leaders and the contents of their collective bargaining agreements. It seeks to guarantee the rights of freedom of association and collective bargaining.

It is too soon to know how the law will work in practice, but the threat that it poses to the corrupt system of protection contracts can be seen by the 400 legal challenges filed by the official unions. There are also some issues that the reforms to the law don’t yet reach: although some provisions cover public sector workers, many do not. Subcontracting remains a serious problem, and 57% of Mexican workers are in the “informal sector,” working for cash-only transactions and paying no taxes.

FAT leader Benedicto Martínez facilitated the final section, posing three questions to local leaders and activists: How do we make sure that workers know about the law? How do we organize to increase the size of our labor movement? In this historic moment, what do we do? There was wide agreement on the need to build a more aggressive educational campaign in all of the areas where the FAT operates. This campaign will include massive distribution of fliers to workers, organization of forums similar to the one in Mexico City, and press conferences to publicize the new law and provide a strong voice condemning the legal appeals by the official unions.

UE General President Peter Knowlton, who spoke during the international panel, stated that “If the labor reforms in Mexico enforce workers’ rights and open up organizing for independent unions that will be huge not just for Mexican workers, their families, and communities, but for all workers everywhere... It is important for us as workers in North America to continue to develop points of common struggle and joint work... We cannot wait. We must act in working class solidarity with and for each other.”

Download the FAT's information brochure about the new labor law (in English)
About the Author:

Robin Alexander was UE's International Affairs Director from 1993 until her retirement in 2014.