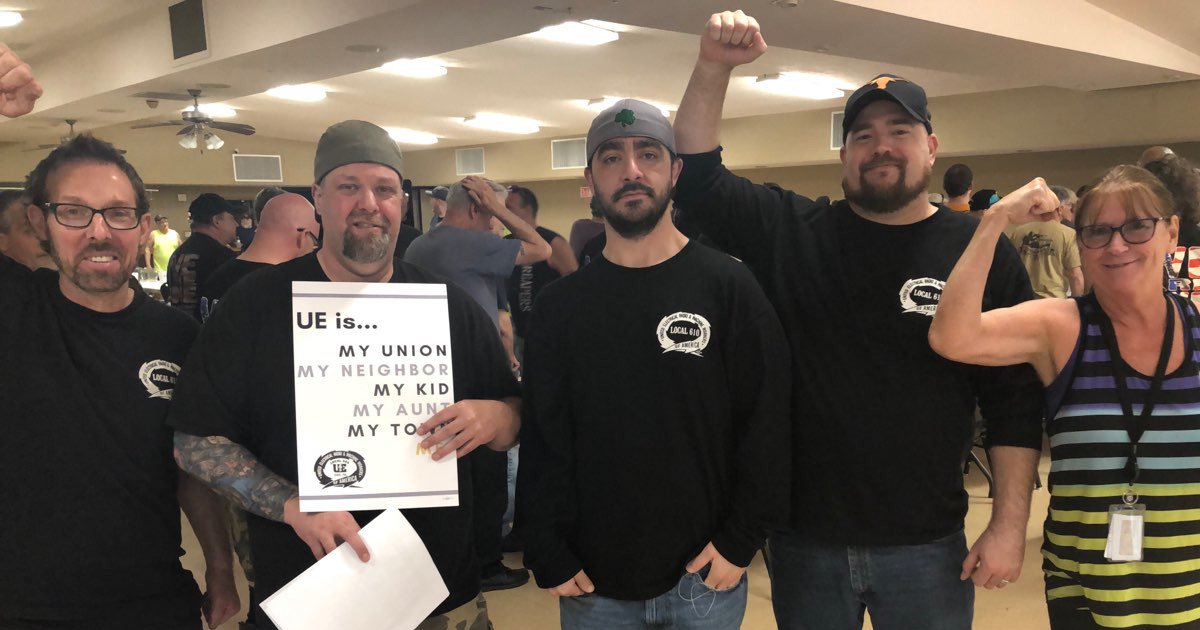 After reviewing and discussing a tentative agreement in a packed house at the Harrison City Fire Hall, UE Local 610 members approved a new three-year agreement with their employer, Wabtec on May 1. The local won key gains with an aggressive contract campaign, supported by the rank and file, other UE locals, and allies.

The biggest win was in health insurance, where members won major improvements on costs. The union also won wage increases of 60 cents each year, along with increases to the life insurance and short-term disability benefits. The job bidding process will be more transparent, and members will have personal leave opportunities for the first time. For workers at the rubber plant in Greensburg, the union increased the Trim pay rate an additional 26 cents before the general wage increases are added.

Wabtec wanted major concessions at the bargaining table, despite record profits, millions gained in breaks due to the latest round of corporate tax cuts, the well-publicized executive bonuses recently doled out, and forecasted growth in the freight and transit industries. While the company attempted to justify its proposals under the banner of “competitiveness,” Local 610 vehemently rejected the concessions and demanded to move forward, not backward on their standard of living and ability to take care of their families.

As President Antwon Gibson explained, “we made a commitment to our membership and made it very clear to everyone involved on both sides that we would not stand for a concessionary contract, and one would not be accepted by the local. What we needed and achieved were real improvements to our contract. Although we didn’t get everything we wanted, we kept everything we needed. I am proud of my membership, proud of my union, and proud to have been in a position to ensure our members a stable future.”

While management continued to reference the “competitiveness” of their health insurance proposals until the last day of bargaining, the committee resolutely insisted on substantial health insurance improvements from a company wealthy enough to easily provide them.

Vice President Ray Shash and Salary Divisional Steward Tim Grohol led the committee in a thorough analysis of health insurance costs at the bargaining table, and concluded that management’s projected costs were substantially out of line with the average costs over the previous three years. According to Shash, “their numbers just didn’t add up on their insurance proposals to justify the increases they were putting on the table. Putting that aside, we know at the end of the day they had the money to easily ensure our costs do not continue to rise at the level it has.”

“They didn’t want to budge on insurance, regardless of what we told them, or how much it cost,” said Grohol. “We could have brought in a million experts and it wouldn’t have changed their minds. At the end of the day, they felt the heat from the rank and file, and that is what got them moving,”

With health insurance a key priority and with strong backing from the members, the local was able to freeze deductibles, co-pays, and out-of-pocket costs for the duration of the contract. Premiums will freeze year one, and increase between two and six dollars per month in years two and three, depending on coverage plan. These are monumental contractual gains, where insurance costs have risen significantly in all such categories over recent years. As Gibson explained, “we were hit hard over the past three years and there was no way we were taking another hit to healthcare increases this time. It had to stop at some point, and that point is here. Looking at the bigger picture, we know the only rational way to move forward as a country on this issue is a Medicare-for-All system. Healthcare should be a right and all Americans should be covered.”

There are improvements in the job bidding process, where the union will now be notified before a job is posted for bid and provided a copy of job applicants’ test results to ensure fairness and consistency. “Getting this was a big deal for us. We needed more transparency during this process — more checks and balances. We believe this to be a step in the right direction,” Chief Steward Dave Rossey remarked.

The contract also includes new language allowing for a personal leave of absence.

Assistant Chief Steward Jeff Kohler noted, “we took the lead of our President, Antwon Gibson, and the bargaining committee was absolutely relentless at the table. We tried as best we could to be the voice of our membership. When the committee spoke, management knew the membership spoke.”

The union stopped the company’s attempt to eliminate language requiring time-and-a-half pay after eight hours in any workday, along with a company proposal that would have allowed management to change and combine job duties and rates of pay with little right for the union to resist. Similarly, the union fought back on company proposals to eliminate the hearing aid allowance, remove New Year’s Eve as a holiday, and reduce the number of union representatives on the shop floor and in grievance hearings. Despite the company’s best efforts, the local will maintain their right to strike under the grievance procedure. This right has become rare in labor contracts in this country, and Wabtec is currently attempting to strip this right from Locals 506 and 618 in Erie.

Another contentious issue at the bargaining table was over random drug testing. The union successfully opposed the company’s proposal, arguing it would be an attack on workers’ privacy and dignity, and possibly open the door for discrimination. As Business Agent Rob Mickinak explained, “we believe as a society in the basic principle of innocence until guilt is proven — random drug testing presumes guilt, and requires one to prove his or her innocence. That is wrong.”

For those workers still covered by the defined benefit pension plan, the company wanted to freeze the plan. The union fought back and stopped that. Newer employees are covered by a 401(k) plan.

Contract Campaign and Solidarity with Locals 506 and 618

According to Gibson, “The executive board and rank and file had ongoing conversations leading up to negotiations and developed a plan to organize so we could fight for the best possible contract. A communications team was formed to distribute weekly flyers to get communication back to the shop floor on meetings, rallies, and bargaining updates. We also used a group text to quickly get word back to all areas of the plant when needed.” Several meetings were held during negotiations, including one on April 24, where the membership voted to authorize the executive board to strike if necessary.

One Saturday, April 27, the local organized a rally in opposition to management’s concessionary proposals at the Wilmerding Park, just outside corporate headquarters. The rally was strongly attended by the local’s membership, with the support of UE Locals 506, 618, 123, 625, and 690. Roseann Barker of the Northwestern Pennsylvania Area Labor Federation spoke, and members of AFGE, IWW, UAW, AFSCME, the Painters Union, SEIU and ATU also rallied in solidarity with Local 610. Commenting on the rally, Gibson added, “it was a tremendous show of solidarity, particularly from 506 and 618. I can’t say enough to thank them for their support of our local. We will stand strong with our union brothers and sisters as they take on their fight for a fair contract. We have their back.” Locals 506 and 618 are in negotiations and on an interim agreement with Wabtec, following a nine-day strike earlier this winter against the company’s demands for concessions after Wabtec took over GE Transportation.

As the bargaining committee entered negotiations on the last day before expiration, it got word that workers at the Wilmerding and Greensburg plants were organizing their own solidarity rallies outside the plant during their afternoon break. Once members began seeing what they could do to put pressure on management in efforts to secure a fair contract, they began taking action themselves. “We truly grew as a membership over the last several months. We are going to continue to build on this momentum to make sure everyone at both plants is treated with some respect. If we need to resort to similar mobilization of our members in order to achieve that, we will do so collectively,” Rubber Plant Divisional Steward Ian Glasgow commented.

The new contract will expire May 1, 2022. Local 610 is one of UE’s oldest locals. Its members manufacture rubber products and airbrake systems for the railroad industry.