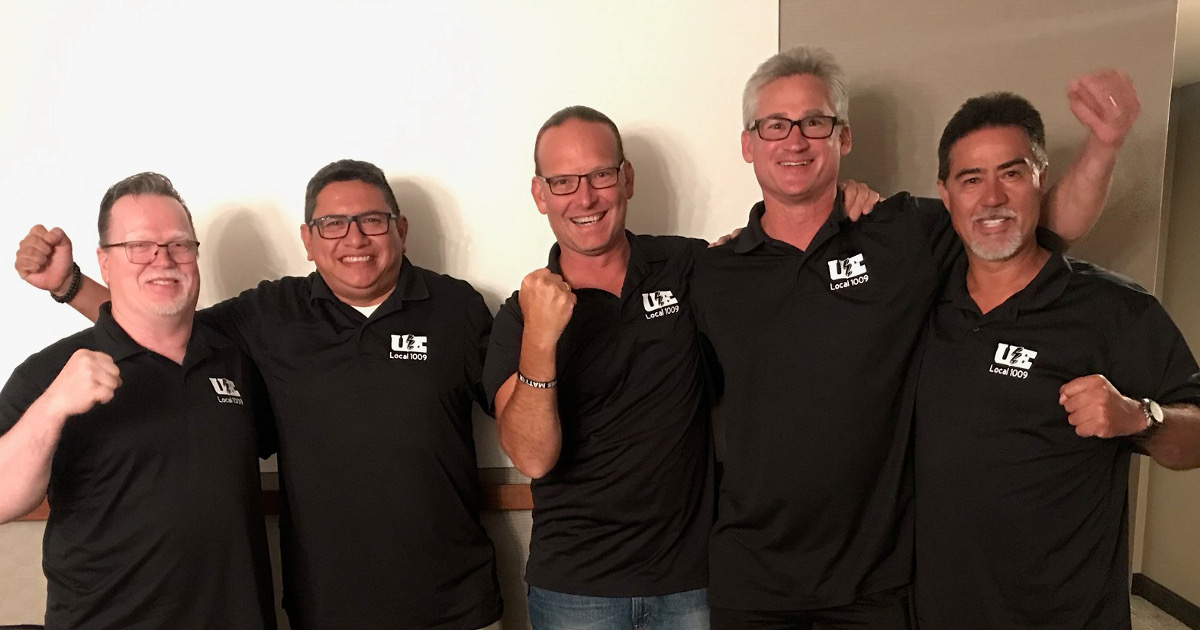 On Friday, July 26, UE Local 1009 ratified their first contract with their new employer ABB (ASEA Brown Boveri), a Swiss-Swedish multinational corporation headquartered in Zurich, Switzerland. This was the local's third set of negotiations during the past year after their previous employer GE sold its Industrial Solutions business to ABB in June of 2018. Local 1009 members repair transformers for the electrical industry and large industrial facilities.

The local first had to bargain with GE over the effects of the sale. Shortly after the sale closed, ABB announced that it was going to “reposition” the Anaheim apparatus repair facility and move to a new location in southern California, not too far from its current location — so the local had to negotiate with ABB over the effects of the move. All of the employees also had to transition over to become transformer repair technicians, except for the shipper/receiver. Six of the local’s members decided to leave and took the negotiated severance package earlier last month.

At the end of 2018, ABB also announced that it was selling its Power Grids business, which includes the Anaheim facility, to the Japanese multinational conglomerate Hitachi. That sale is supposed to close in the second quarter of 2020. Hitachi has indicated that it will accept all of its U.S. union contracts.

“As we began our negotiations it appeared we had a steep hill to climb, due to the CBAs [collective bargaining agreements] that the company had recently signed with that other union,” said Local 1009 President Shawn Jackson. “The company might have thought it would be easy to do to us what they had done to others, given the fact we were the smallest group to negotiate with them. We proved them wrong.”

The new three-year agreement preserves the local’s existing wage rates and includes $3,500 in lump sum payments after ratification and a 2.75 percent general wage increases in the second and third years. The local was able to preserve most of their benefits and working conditions that they had under GE, with some modifications. Instead of the GE defined benefit pension plan, the local’s members will now have a 401(k) defined contribution plan with ABB contributing 3 percent of an employee’s wages each pay and a matching contribution of 75 percent of an employee’s contribution up to 6 percent of each pay. Employee payroll contributions for medical, dental and vision will not be increased prior to January 1, 2021.

Current employees will continue to receive a 10 percent shift differential; however, new employees will only receive one dollar per hour to their base wage rates. The local beat back ABB’s demand that they agree to mandatory overtime and maintained the overtime premium pay their members had under GE, including a defined work week of Monday to Friday. Instead of Income Extension Aid (IEA), which provided a weekly subsidy based on an employee’s weekly earnings when an employee was laid off under GE, the employees will now receive $610.00 per week in addition to their unemployment benefits when they are laid off due to a temporary lack of work.

The local was also able to beat back ABB’s demand that they agree to cross another union’s picket line under the company’s No Strikes and Lockouts proposal. And just as importantly, the local beat back lower "competitive wages" for new hires that ABB was demanding, which another union had agreed to at six other former GE Industrial Solutions facility locations throughout the U.S. In exchange for the ABB dropping its demand for competitive wages, the local agreed to extend the time frame of the progression schedules for the Transformer Repair Technician C position from 6 months to 18 months and the Shipping and Receiving position from 6 months to 15 months.

“We did not simply take what they were going to give to us. We stood united for what our members wanted,” added Local 1009 Vice President Larry Leafstone. “Our united front broke them down until we got all of the important things that we were not going to give up. No competitive wage agreement. Cell phones and laptops for all field service technicians. No loss in paid holidays. Expanded bereavement benefits.  Increase in meal allowance. Larger percentage wage increases in the second and third year of the CBA - not just the third year only. Larger cash payment and signing bonus.  A defined work week and working hours. Standby time for weekdays / weekends for field service technician working out of town.  These are just some of the main highlights that our members unanimously ratified. This proves the old saying that united we stand, divided we fall. This is a good example of why we must hold on to our right to organize and bargain collectively.”