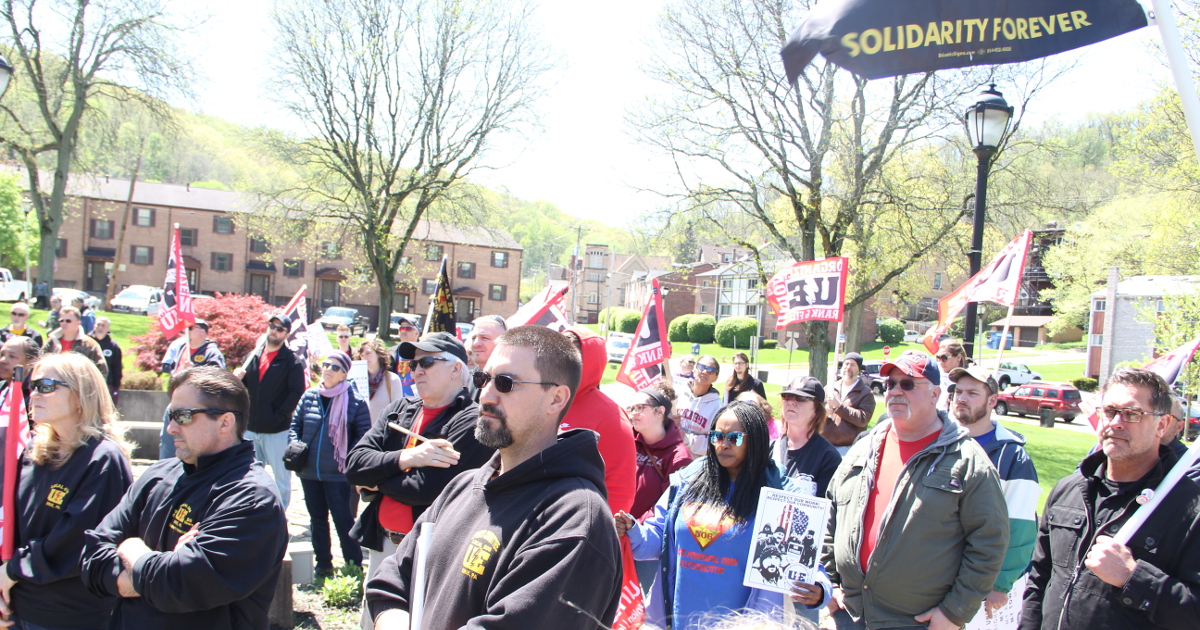 Members of UE Local 610, who work at Wabtec’s Wilmerding and Greensburg facilities, rallied on Saturday, April 27 against Wabtec’s demands for concessions. Local 610’s contract expires on May 1, and UE members voted on April 24 to authorize their executive board to call a strike if necessary.

The company’s demands include major increases to health insurance, cuts to overtime pay, reducing recall rights, random drug testing and freezing the pension. The company’s proposals would also allow management to change and combine job duties and rates of pay with little contractual right for the local to resist.

“I have a family,” Local 610 Assistant Chief Steward Jeff Kohler told the rally. “I can't afford increases to healthcare.”

Local 610 members were joined by supporters from other unions, including Wabtec workers from Erie, PA, where UE Locals 506 and 618 struck for nine days earlier this winter against Wabtec’s demands for concessions after Wabtec took over GE Transportation. Local 506 President Scott Slawson’s message for Local 610 members was “Now is your time, if you do not fight for what you want, don't cry for what you lost.” Local 618 Business Agent Janet Gray added “Our fight is your fight.”

Donna Morgan, president of UE’s Eastern Region, said, “If we give in today it will only get worse. They will continue to systematically take back all of the gains our brothers and sisters have fought for. All of UE stands behind our Local 610 brothers and sisters in their fight to obtain a fair contract.”

Wesley Henshaw, president of UE Local 123, whose members traveled from Virginia to support Local 610, told Wabtec workers, “You work hard for what you get, and you deserve more. If not for you, they don't have a company. You're doing this for every union in this country.”

Members of UE Locals 506, 618, 625, 690 and 123 joined Local 610 at the rally. Roseann Barker of the Northwestern Pennsylvania Area Labor Federation spoke, and members of AFGE, IWW, UAW, AFSCME, the Painters Union, SEIU and ATU also rallied in solidarity with Local 610.

Local 610 has represented workers at the Wilmerding plant since 1937, and struck for six and a half months against concessions in 1981-82.