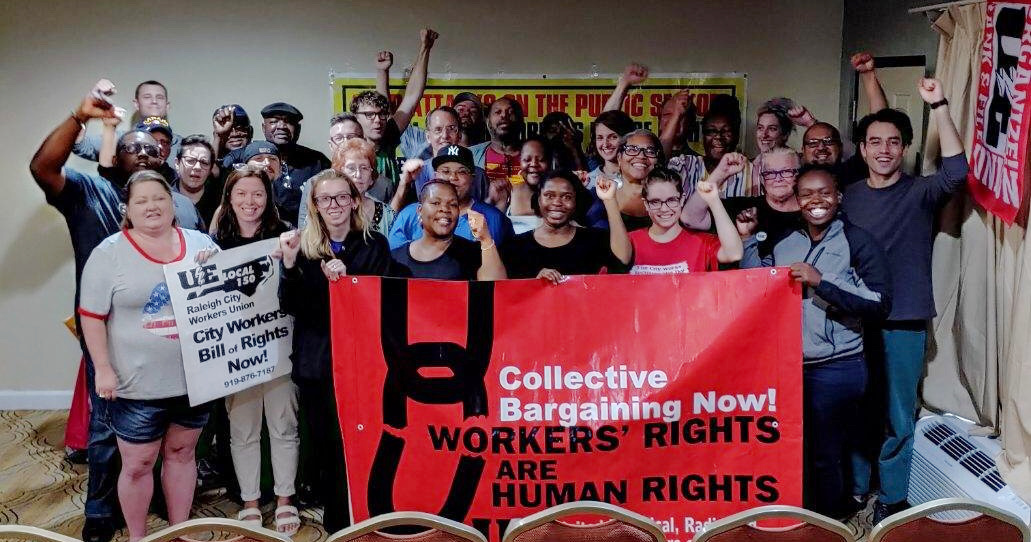 From June 9-14, over 40 UE and Unifor members gathered in rural eastern North Carolina for an organizing blitz, reaching out to non-union workers in 10 different workplaces to talk to them about joining the union. The blitz was part of the North Carolina Public Service Workers Union, UE Local 150 campaign to build a statewide movement of municipal workers to fight for a Municipal Workers Bill of Rights. Activists talked to city workers in Wilson, Goldsboro and Rocky Mount, as well as reaching out to workers in others workplaces where the union already has chapters such as city workers in Raleigh, four state-operated Department of Health and Human Services mental health facilities, and two auto parts plants.

The blitz was a project of the North American Solidarity Project launched in 2017 by UE and our close labor ally in Canada, Unifor. Three Unifor members came to North Carolina to participate in the blitz and learn about the struggles of Southern workers and the social-movement union approach of UE Local 150.

Throughout the week, the participants circulated over 1,800 fliers to non-union workers and collected over 300 names of interested workers to join the union. 134 workers attended union-interest meetings.

“This blitz was really excellent at bringing more attention to Eastern North Carolina for our Municipal Workers Bill of Rights campaign,” stated Bryce Carter, UE Local 150 President and street maintenance worker in the City of Greensboro. “By bringing our union message to these three new cities, we can now really say that we have a statewide movement! This is a big advance in building workers power.” 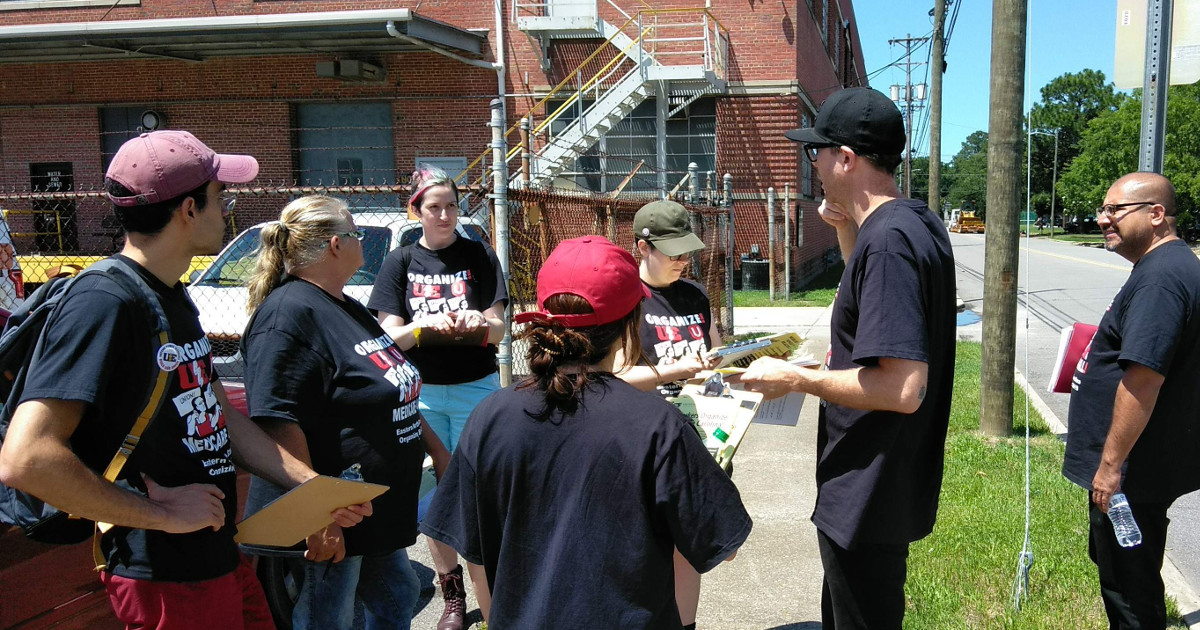 Blitz participants discovered that without a union, many municipal workers suffered from dangerous working conditions, including no required breaks to protect themselves from excessive summer heat. After the tragic 2017 death from heat-related illness of Anthony Milledge, a solid waste laborer in the City of Charlotte, Local 150 fought for and won excessive-heat policies in the cities of Greensboro, Durham and Raleigh. These policies require hourly breaks when the heat index is over 90 degrees. This is part of the statewide Municipal Workers Bill of Rights campaign to set basic standards that all city workers in the state and southern region should be able to expect.

City workers in Rocky Mount reported having to pay $200 every two weeks in health insurance premiums. Additionally, many pay utility bills around $400 every month. This is impossible to sustain on the wages of around $11-12 per hour that they often earn. Many of the cities in Eastern NC, including Wilson and Rocky Mount, set up their own publicly-owned municipal power systems to generate power locally for their residents. Nineteen of these cities formed an alliance to share power amongst themselves, and all contributed to building five power plants, at the cost of $3.5 billion. However, in 2015, the cities sold these power plants to a privately owned corporation, Duke Energy, for only $1.5 billion, leaving the difference of the bill to fall on local residents, who now collectively pay over $10 million a year in interest.

“It was powerful to see the strength in numbers,” stated Jess Sims, blitz participant and Young Activist from UE Local 123 in Staunton, Virginia. “If you stand alone you will fail. But everyone coming together for a common cause can make real changes.”

Public workers in North Carolina are banned from collectively bargaining a union contract. So Local 150 is a direct join, direct action union where workers can sign up to become members and not have to wait for an onerous labor board election. This new style of unionism, which is picking up across the South and even the country, is one of the things Unifor members came to learn about. 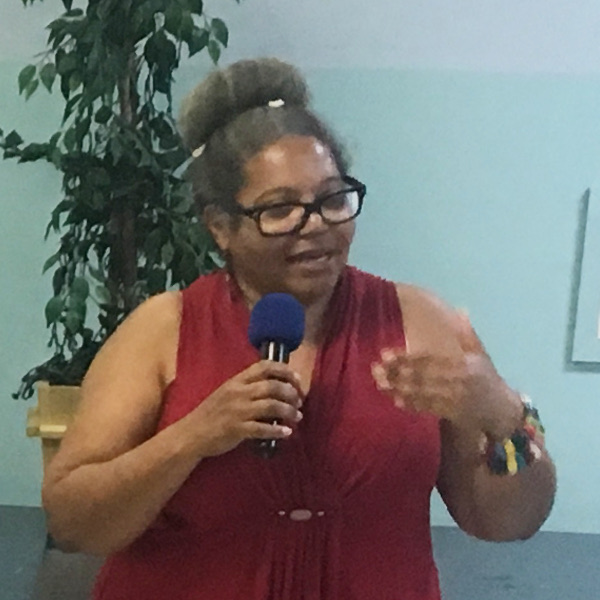 As part of their organizing outreach, blitz participants talked to workers about their healthcare costs and invited workers to attend a Town Hall forum in Wilson, NC in support of Medicare for All. The event was hosted on June 13 at the Darden Alumni Center and was attended by many workers and community supporters, including state Representatives Jean Farmer-Butterfield and Raymond Smith. Workers spoke out about their struggles with health care costs. Members of Unifor spoke out about the single-payer system of healthcare in Canada, to give workers a vision about what we are fighting for.

Southern Workers Medicare for All Campaign

Directly after the organizing blitz, over the weekend of June 15-16, Southern workers from the UE, National Nurses United, and International Longshoremen’s Association Local 1422 met in Charleston, South Carolina for a Workers’ School and to launch a Southern Workers Medicare for All campaign.

In the lead-up to the 2020 elections, the Southern Workers Assembly is encouraging all workers’ organizations to raise up the demand for affordable healthcare, specifically for the passage of the bills in US Congress for expanded and improved Medicare for All (HR 1384 and S. 1129). The various presidential candidates have widely different plans for fixing the broken US healthcare system. By having a clearly-defined, unifying demand, SWA members hope to advance the struggle for healthcare for all during this electoral period, regardless of who wins the election. The SWA believes that by building a worker-led, Southern movement for Medicare for All it can help draw non-union workers into our movement, and build union-workplace organization across the South.

A major part of this campaign is educating workers in the workplace, including doing outreach to non-union workplaces with informational leaflets about the campaign, given that most workers still primarily receive health insurance through their employer. Improved Medicare for All would reduce the reliance of workers on their employers, by providing everyone with access to quality healthcare whether they are employed or not employed. It would also take health care off the bargaining table, and the time and energy that most unions spend bargaining over healthcare could be spent instead on bargaining for better wage increases, paid time off, safety protocols and other much-needed improvements.

Cities for Medicare for All

As part of this campaign, the SWA hopes to organize city-wide committees led by workplace organizations to do broader workplace and community outreach. These committees would build towards hosting public Town Hall meetings and pushing to pass resolutions in city and county councils across the South. At least three Souther cities have already passed such resolutions — St. Petersburg, FL, Durham, NC and Carrboro, NC.

The NNU draft resolution points out that:

WHEREAS, the United States spends nearly twice as much per capita on health care as all other comparable countries and yet ranks only 35th in the world by global health standards, including on such critical barometers as average life expectancy, infant mortality, maternal mortality, and death from preventable diseases; and

WHEREAS, the Affordable Care Act (ACA) enacted important improvements, primarily through the expansion of Medicaid in states that have agreed to do so, and limits on some insurance industry abuses, that reform left tens of millions with a continuing crisis in access, cost, and quality of care; and

WHEREAS, the uninsured rate for U.S. adults has risen for four straight years up to nearly 30 million, even after implementation of the ACA, with the greatest increase among women, young adults, and lower-income people; and

WHEREAS, tens of millions more who pay for insurance remain underinsured due to the still largely unregulated high cost of medical care that has led to one-third of all GoFundMe accounts being established to pay for exorbitant medical bills; and

WHEREAS, more than 40 percent of all U.S. adults under the age of 65 forego needed medical care, 30 percent fail to fill a prescription or take less than the recommended dose, and a third said they had to choose in the past year between paying for food, heating, housing, or health care, and

WHEREAS, the inability to pay medical bills continues to be a leading cause of personal bankruptcy, and people who need medical care should never face bankruptcy as a result of needing care;

The suggested resolved commits the city to supporting the Medicare for All Act of 2019 (H.R. 1384 and S. 1129) and calling on their federal legislators to work toward its immediate enactment.