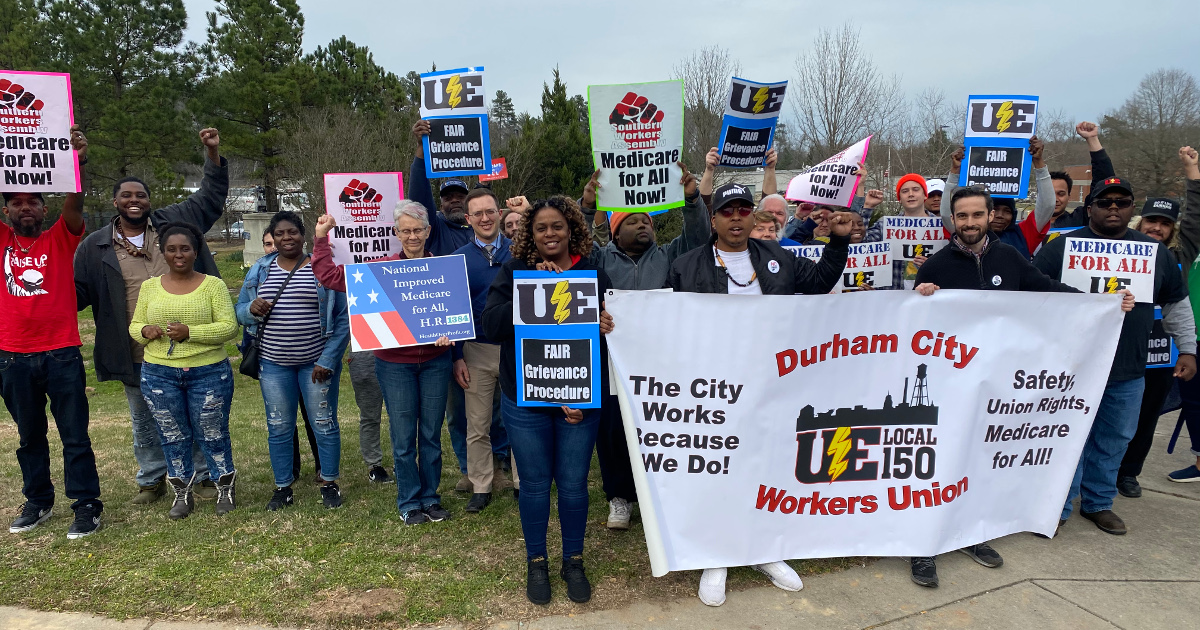 Members of the Durham City Workers Union/UE Local 150 and the Durham Workers Assembly demand Medicare for All and a fair grievance procedure
March 3, 2020
North Carolina

UE Local 150 held rallies for Medicare for All and union rights in six cities across North Carolina yesterday, the day before that state’s presidential primary. UE members who work for city governments, the state of North Carolina and the Cummins Rocky Mount Engine Plant were joined members of the Southern Workers Assembly, Raise Up for $15, the National Domestic Workers Alliance, and community supporters in “pickets for health.”

“68,000 lives and $450 billion would be saved under Medicare for All per year,” said UE Local 150 President Bryce Carter, citing a new study from Yale University. “We are already paying for it. We have the most expensive healthcare system in the world.” 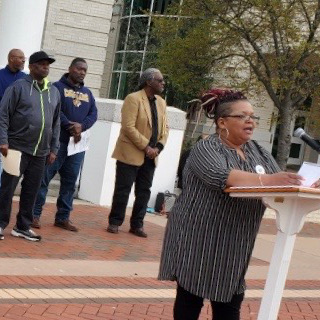 “State employees and state tax payers are being gouged by insurance companies, like Blue Cross Blue Shield, collecting enormous premiums,” said William Young, a food and nutritional services worker at Cherry Hospital in Goldsboro, NC and president of the UE Local 150 chapter at Cherry. “Every year in recent memory, the cost of our premiums and deductibles have been going up. Family plans now cost us over $700 per month. Under a Medicare for All system, hundreds of millions will come back to NC taxpayers and more back into the wallets and purses of state workers.”

Charlen Parker, a solid waste services worker for the City of Raleigh and President of Raleigh City Workers Union/UE Local 150, noted that with Medicare for All, “an estimated $22 million will come back to Raleigh taxpayers and nearly another million back into the wallets and purses of city workers. Let’s join the rest of the industrial world and support a universal healthcare program which for us is Medicare for All.” 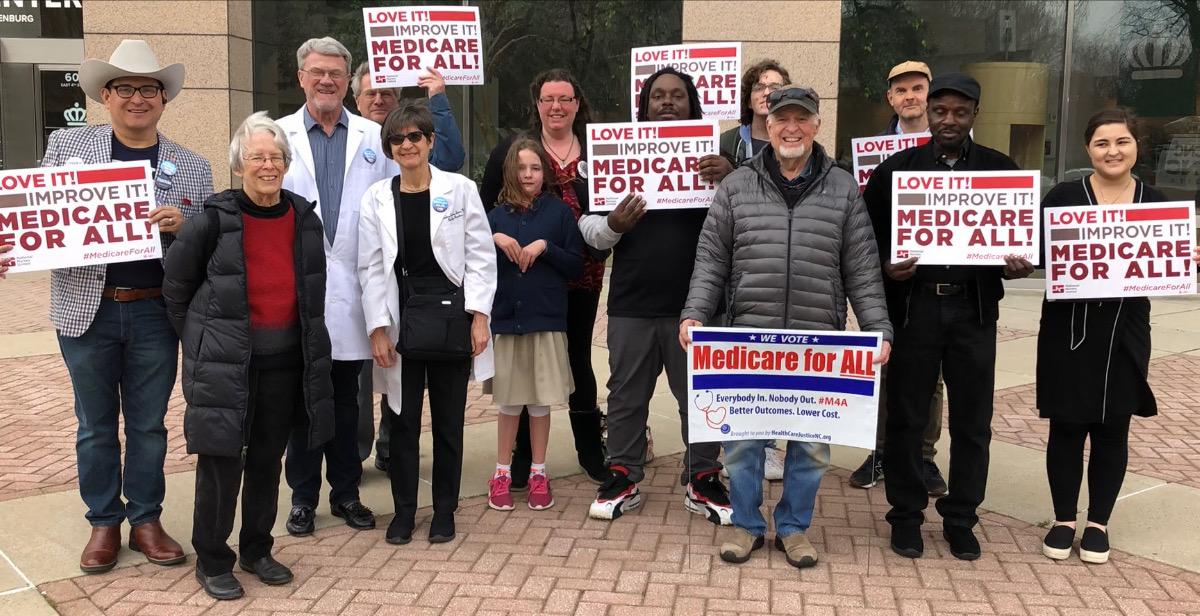 “City workers need immediate relief from high premiums they currently pay,” said Charlotte City Workers Union President Dominic Harris, citing the $434.50/month premium for basic family coverage. “That amounts to about 20% of take home pay for workers starting out.” Harris works for the water department in the City of Charlotte. 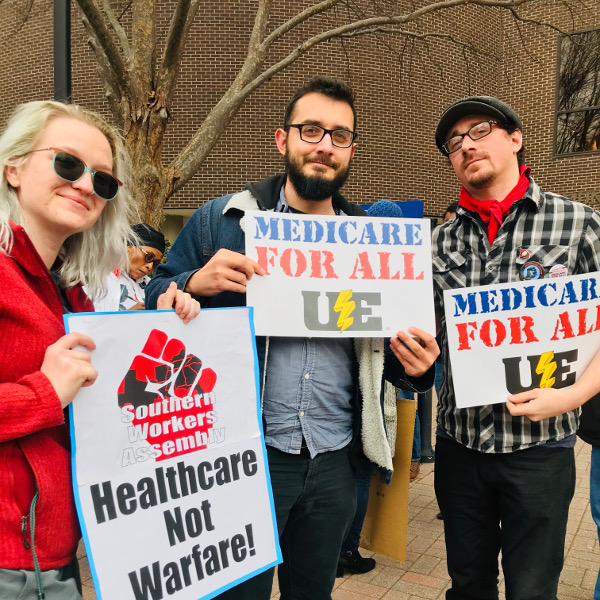 "The current healthcare system does not support workers,” stated Miranda Elston, a graduate employee at UNC Chapel Hill and member of UE Local 150. “As UNC graduate workers, we are not given dental insurance and are restricted from many services that are considered essential for basic healthcare. This is unacceptable. Medicare for All would provide access to healthcare including vision and dental.”

In North Carolina, public workers are denied the right to bargain collectively with their employers and cannot negotiate even incremental improvements in their health care coverage, making the protection of health for them and families all the more difficult.

The situation is little better for private-sector workers. Jimme Thorne, president of CAAMWU/UE Local 150 at the Rocky Mount Cummins Diesel Engine Plant pointed out that “more than a quarter of all US workers with health insurance now have a deductible of at least $2,000 for single coverage, a survey by Kaiser Family Foundations found. The average cost of a family health plan is now $19,616 per year, with employees contributing $5,547. Deductibles for Cummins workers for single coverage is $3,000, over $1,000 more than the already high national average.” 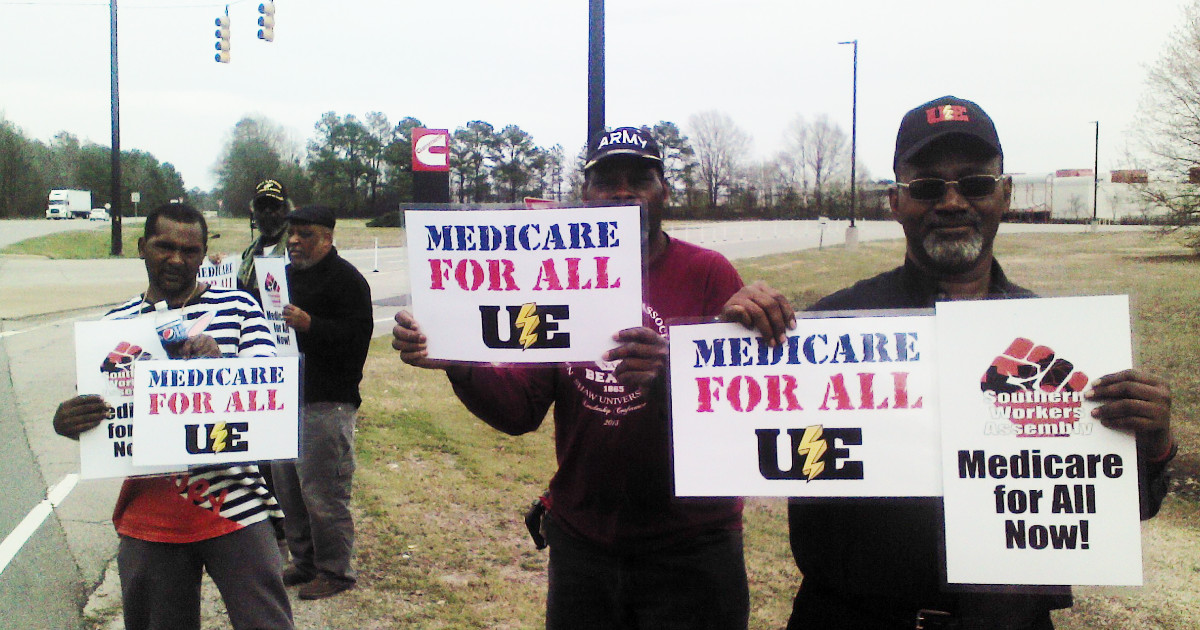 Members of CAAMWU/UE Local 150 demand Medicare for All in Rocky Mount, NC

The local’s campaign aims to pressure the Department of Health and Human Services and city councils to pass resolutions endorsing the federal Medicare for All Act (HR 1384) legislation now before Congress. Similar resolutions have been passed all across the South including in Durham, Carrboro and Orange County, North Carolina. Workers are also calling on all candidates running for the NC General Assembly and US Congress to support Medicare for All.

The Durham City Workers Union is proposing a fair grievance procedure so that workers are no longer “at-will” employees, but instead are covered by a formal grievance procedure that allows them to grieve a broader range of issues and provides an unbiased panel to make rulings on personnel matters. Workers in the Durham Parks and Recreation and Water Management spoke out at a public forum in December demanding these changes, and have delivered their demands to the City Manager. Union members expressed concern around skilled, senior workers being pushed out with little recourse under the current system, and its impact on the public services they provide such as safe recreational programs.

“Myself as well as dozens of other Parks and Rec workers have been forced to quit because of the hostile working conditions in the School Age Care program,” said DeMario Jennette, a former DPR employee.  “Nearly the entire program’s staff have quit in the last year. This program has a long list of staff that were very enthusiastic about the program when they were hired, but soon become demoralized by the micromanagement and unprincipled and over-harsh criticisms and unwarranted discipline from management.”

“The city’s current evaluation system ‘EPEP’ allows for supervisors to over-scrutinize employees and perform so-called ‘coachings’ daily on every little thing they felt the worker did wrong,” added John Morris, a maintenance technician in the Water Management Department and member of Local 150. “Even if they are false, we have no recourse to have them removed from our files, and can impact our merit pay and even lead to unjust discipline and terminations. We need a grievance procedure that holds management accountable on all levels.” 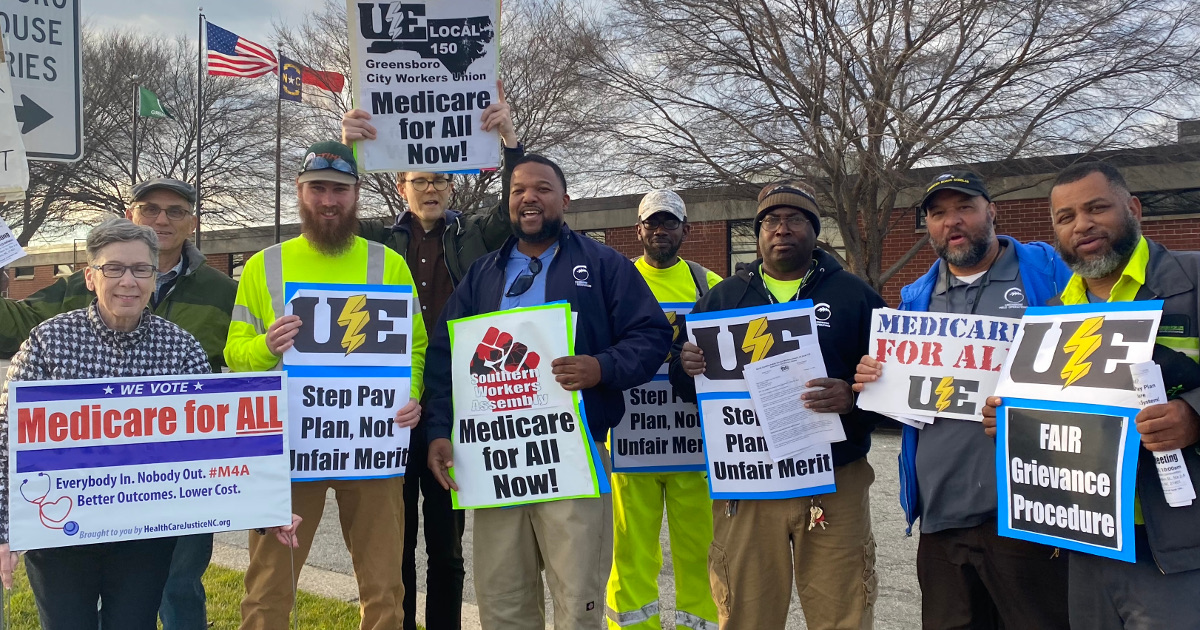 Greensboro City Workers Union announced their budget proposal for Step Pay Plan and campaign for fair grievance procedure at their rally and press conference on Monday. City union workers are putting forth a Step Pay Plan that would ensure that workers get compensated fairly for years of service, removing the bias of the merit-only pay system currently in place. The union revealed through public records that last year in the Water department, managers and superintendents averaged a 4.3 percent raise, while crew members received an average of 1.84 percent. In the field operations department managers and superintendents received an average of 3.82 percent and crew members an average of 3.11 percent.

“We are encouraging the City Council to add a Step Pay Plan in their FY 2021 budget to eliminate the years of unfair merit raises,” said Brendan Parmenter-Wynands, vice president of the Greensboro City Workers Union and a worker in the Field Operations department. He noted that merit raises have “given management consistently higher raises than other employees, leading to chronic low wages for most front-line employees.”

Additionally, the union is proposing a fair grievance procedure to replace “at-will” employment with the due process of a formal grievance procedure. Union members expressed concern that skilled, senior workers are being pushed out with no recourse to file appeals under the current system.

Rally at Raleigh City Hall with UE150 members from City of Raleigh Sanitation department, UNC and NC State University along with supporters from Raleigh Workers Assembly