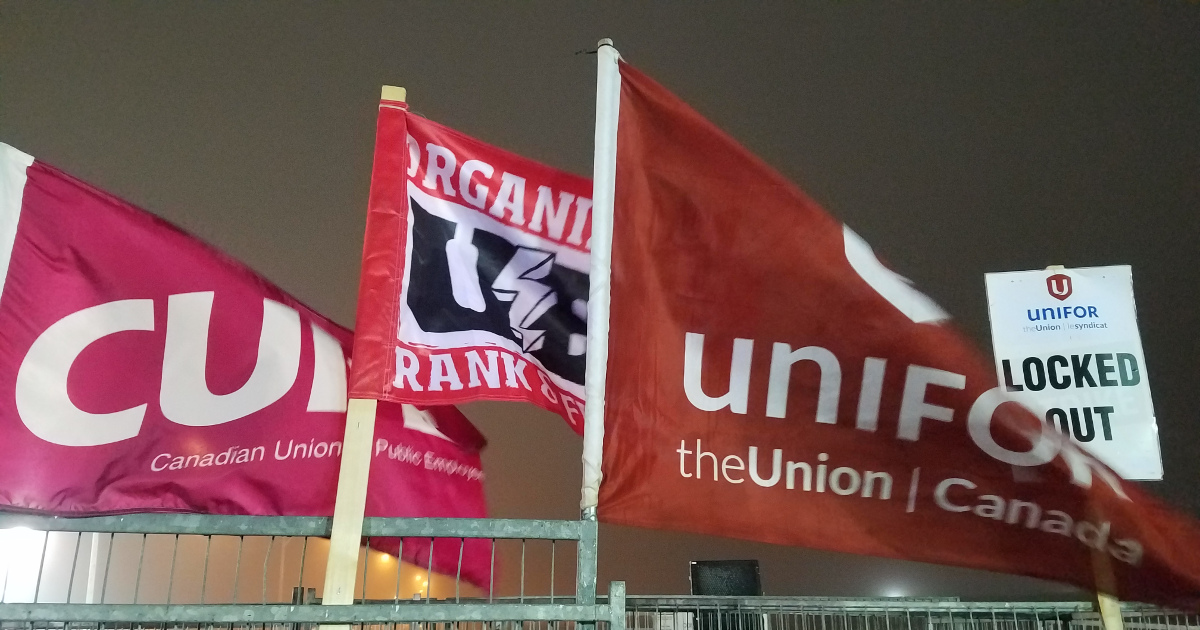 UE's officers sent the following letter of solidarity today to Unifor Local 594, whose members have been locked out for 64 days.

As the shameful lockout of Coop Refinery workers in Regina, Saskatchewan enters its tenth week, UE reaffirms our full solidarity with Unifor Local 594. The very right of workers to have an organized voice and a say in their workplaces is at stake in this dispute. We are encouraged by the solidarity shown to Local 594 by their national union and the rest of the Canadian labor movement, and we encourage all US unions to close ranks with our brothers and sisters in Canada to defeat this attack on our rights.

Federated Coop Limited (FCL), which owns and operates the Coop Refinery, has avoided their obligations to bargain with Local 594 by enlisting the police force and the government to break the union. Nineteen workers have been arrested over the last three weeks, including members of Unifor's leadership team and the locked-out local union, many for simply picketing on the sidewalks they were forced onto by their employer.

The purpose of government involvement in labor disputes should be to maintain balance in the process of bargaining, and to provide for peaceful resolution of disputes.

FCL built scab camps inside the perimeter well ahead of bargaining and has been helicoptering scabs in. Recently, they cynically took advantage of a good-faith attempt by the union to get back to the negotiating table. When Unifor suspended their blockade and made a generous offer to resolve the dispute, FCL merely demanded further takeaways at the table while moving scabs and oil trucks in and out the facility. These are not the actions of a company interested in reaching a fair negotiated agreement with its workers.

This is what happens when employers feel like they have free reign to prolong labor disputes by employing scabs and using heavy-handed legal and police tactics against the union. We join Unifor in calling for the government to appoint a mediator with power to assign binding arbitration if parties fail to come to an agreement. We also urge provincial, state and federal governments in both of our countries to pass anti-scab legislation to prevent these kinds of disputes in the future and restore workers’ rights to engage in meaningful collective bargaining with their employers.

This struggle is not simply about refinery workers in Regina, it is about democracy and power for all workers. Solidarity forever!

View this letter on letterhead, as a PDF