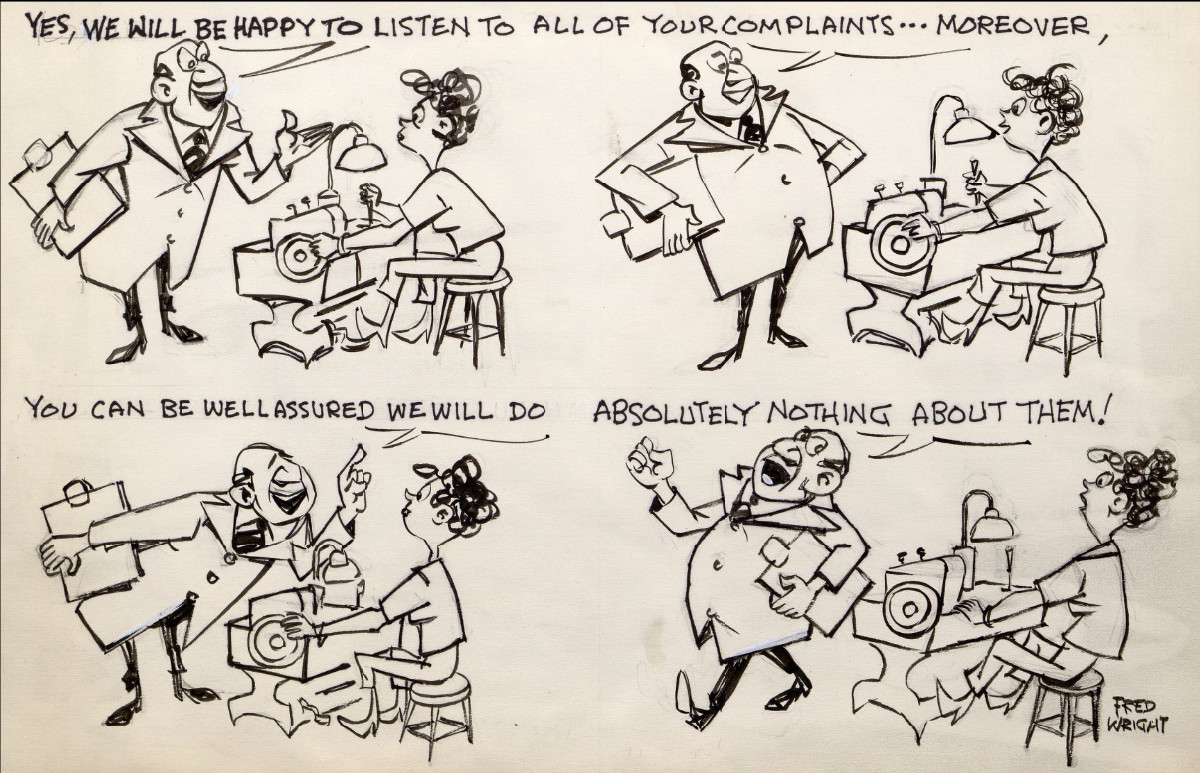 UE launched a new Instagram account today with a celebration of UE cartoonist Fred Wright, who was born on this day in 1907. He worked for UE from 1949 until his death in 1984. The UE NEWS asked retired managing editor Peter Gilmore, who worked with Wright, to write a recollection of Wright for this occasion.

UE is on Instagram at @ueunion. More Fred Wright cartoons can be found at this online exhibit, put together by the University of Pittsburgh archives.

Fred Wright came into a world without social media and without television. Photos and comics competed with the new technology of talking pictures. Fred preferred to jazz up life with his saxophone, but he couldn’t escape from the power of images. And he brought that power to the new working-class culture he helped to create.

Early CIO newspapers were lively and fun, as ready to ridicule the bosses and their henchmen as to savage them with exposé and condemnation. The CIO in these days, after all, was a movement, propelled with the bold task of liberating the millions of industrial serfs at the beck and call of manufacturing magnates.

Fred Wright, who couldn’t escape the thrill of drawing, was all set to work for Walt Disney—until he realized he’d be scabbing on striking Disney animators. He took to the sea with his sax instead, eventually—inevitably—submitting cartoons to the newspaper of the National Maritime Union. And joining the NMU staff.

Fred’s NMU career lasted until the union’s president followed the example of the CIO leadership, which followed the example of the Truman administration, which followed the direction of big business. Joe Curran began red-baiting—denouncing union members as communists, which meant too radical. Wrong in principle, red-baiting is harmful in practice. In this particular instance, red-baiting cost the maritime union the best cartoonist of his generation. Fred Wright, who wouldn’t scab on the Disney workers, wouldn’t red-bait— the moral equivalent of scabbing.

And so Fred came to work for UE. His work was already appearing in the UE NEWS, so the switch to the much bigger organization—UE being the third largest CIO union—was a natural. The clever, truth-telling, and downright funny cartoons Fred created for the UE NEWS became inseparable from the newspaper’s identity. Fred’s artwork became the face and the message of militant, rank-and-file unionism.

(When the red-baiting pandemic weakened UE and the labor movement as a whole, Fred [like many workers, with a family to support] worried that he’d have to put down the pen and pick up the sax again. But the union survived, and with it, Fred’s contribution to its unique and effective visual culture.)

Not only cartoons for the newspaper: Fred’s power of illustration from a working-class perspective gave life and lift to UE pamphlets—many UE pamphlets. And if he missed out on contributing to Disney films, Fred had first-hand experience with animation with UE.  He created cartoon films that brought together the technology of his generation with labor motifs and UE’s vision. (This do-it-yourself, experimental animation, with frames stretched around and around the Wrights’ house in Richmond Heights, Queens.)

Fred Wright’s work is the visual record of UE—and, in a real sense, the visual record of the labor movement in the middle decades of the twentieth century: from an insurgent movement growing with the upsurge of a downtrodden working class to a divided movement, with half favoring compromise and conciliation and opposed to those pledged to continue the struggle, to a complicit officialdom overseeing “mature labor relations,” opposed by a righteous remnant committed to organize and fight for the promise. Fred Wright’s work depicts it all, riffing on, elaborating on, jauntily sounding out the call for working-class emancipation through rank-and-file unionism.