Canada’s Workers and the COVID-19 Pandemic 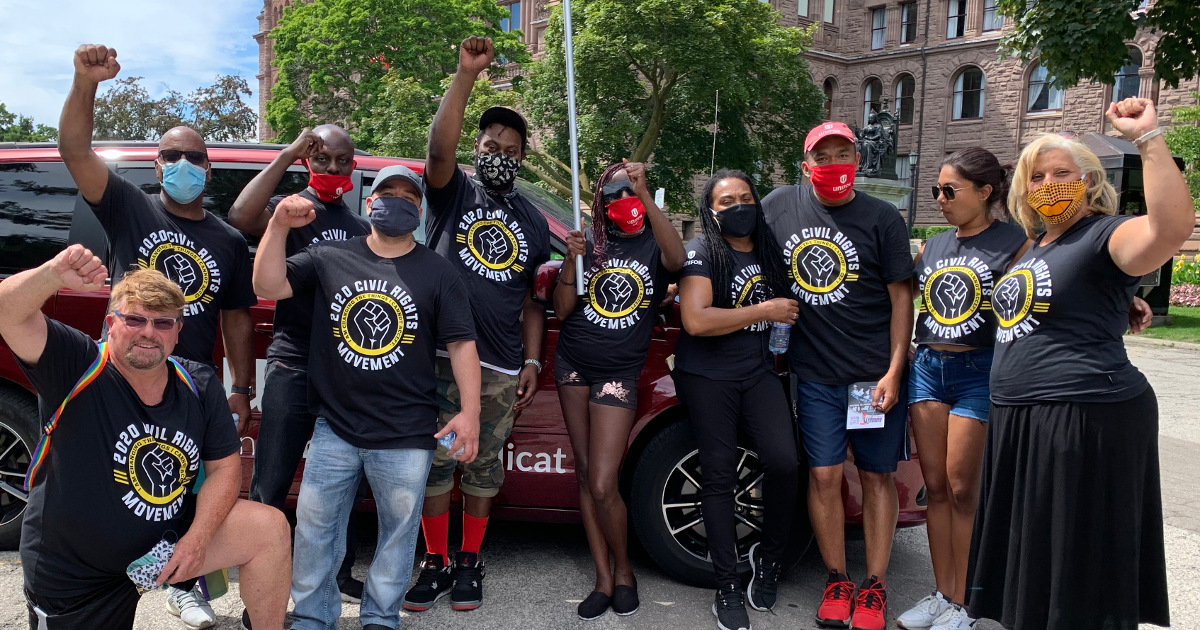 As the first anniversary of the start of the COVID-19 pandemic approached, the UE International Department asked two of our international allies, Unifor (Canada) and Zenroren (Japan), to share with UE NEWS readers a glimpse into what work and life is like now in their countries. We asked these allied unions to share what their government’s response to the virus had been like, as well as how these unions were organizing or in other ways helping workers to protect themselves during these new health and economic challenges.

Unifor is Canada’s largest private sector union, with more than 315,000 members across the country, working in every major sector of the Canadian economy. They are partners with UE in the North American Solidarity Project, which aims to transform the labor movement in North America based on democratic, militant, and social movement unionism. (Read Zenroren’s contribution here.)

Over the past year, workers in Canada have felt much of the same effects as workers across the world. At first, initial enthusiasm for the contribution of essential workers was applauded and then their pandemic pay was cut. Front-line staff engaged in the fight for adequate personal protective equipment (PPE), sometimes facing employers who deliberately prevented workers from accessing life-saving PPE. After the initial wave of layoffs related to COVID-19 shut downs, many workers are back to work with heightened health and safety protocols. However, many workers, including those in the airlines, hospitality, and gaming sectors, are still largely out of work. Others, including in aerospace, are watching layoffs mount. A year into the pandemic, Canadian workers continue to fight for sector-based relief packages and expanded workers’ rights.

The employment situation in Canada has been impacted by the pandemic, like it has in much of the world. As the COVID-19 crisis continued into 2021, the economic impact of a second wave of lockdowns on the Canadian economy revealed itself in a sharp uptick in job losses during January. From December 2020 to January 2021, nearly 213,000 jobs were lost with the unemployment rate increasing 0.6 percentage points to 9.4%.

Job losses were significantly greater for women compared to men and their unemployment rate was similarly higher (9.7% for women vs. 9.2% for men), reversing a well-established trend over the past decade when women tended to experience lower unemployment than men.

The federal government maintains special income assistance measures, including through various so-called “recovery benefits” as well as expanded unemployment insurance (called Employment Insurance, or EI, in Canada). Calls are growing for government to make special EI rules permanent, alongside other improvements. Updated mandates issued by the Prime Minister’s Office charge the federal employment minister to embark on a modernization of EI, a generational opportunity for change. The expansion of EI access rules, which have historically been restrictive and exclusionary, has disproportionately benefited women during the crisis, including those earning low wages.

In Canada, the federal government was quick to roll out supports for Canadians affected by the pandemic in the early days. While initial efforts in the form of income replacement, emergency benefits and wage subsidies were welcome, much of these efforts have been undermined by right-wing provincial governments who preferred to deny or delay the supports many Canadians needed at the time they needed it.

In fact, the Canadian Centre for Policy Alternatives published a report highlighting that “Canada has earmarked $374 billion between federal and provincial governments in direct COVID-19 emergency spending, but almost every province is sitting on unspent funds.” This has prompted many questions about the role provincial governments might have played in making life even more dangerous and difficult for Canadians across the country.

In June 2020, Unifor released a comprehensive document called Build Back Better: Unifor’s Road Map for a Fair, Inclusive and Resilient Economic Recovery.  (The document, which was released before Joe Biden announced his recovery program of the same name, can be found online at buildbackbetter.unifor.org.)

The vision document aims to provide workers and activists with the blueprint to inspire the post-COVID era, while recognizing that the pandemic is not yet over, and that much work remains to be done to eliminate the virus. More than simply returning to what was, it is imperative that Canada redesign its economic programs, its social infrastructure and public services to build an inclusive, fairer and more resilient economy. Investing in workers’ shared prosperity, not in private profits, must be the government’s objective.

Unifor members and local unions are encouraged to apply the Build Back Better road map to fight for improvements, both within their workplace, and within wider society on five themes: income security, green jobs and decarbonization, critical infrastructure, rebuilding domestic industrial capacity and strong, enforceable conditions on corporate support packages.

Historic Bargaining in the Auto Sector

In the fall of 2020, Unifor set out to bargain major collective agreements with the country’s unionized automakers, namely Ford, FCA (now Stellantis) and General Motors. Through this historical and unique round of bargaining, Unifor secured nearly $6 billion in total investment commitments, adding approximately 4,000 direct jobs in Canada.

These agreements included a full conversion of the Ford Oakville plant into Battery-Electric Vehicle-only by 2026 and new BEV/Hybrid architecture in FCA Windsor by 2024. It also marked the return of truck assembly to GM’s Oshawa plant after a hard-fought campaign led by the union following an announced closure just two years prior. Additional EV investments in GM’s CAMI facility in Ingersoll, announced earlier this year, will bring electric commercial delivery van production to Canada for the first time.

With this round of bargaining under pandemic rules, Unifor signaled the launch of a new green auto strategy in Canada.

In addition to significant gains for members, Unifor also bargained a new workplace racial justice advocate, a position that will provide workers of color with direct union-side support in dealing with discrimination and racism at work. The bargained language also recognized March 21 as the International Day for the Elimination of Racial Discrimination, with a mandated one-minute moment of reflection and workplace awareness events organized on that day. Unifor is encouraging all local unions to put racial justice on the bargaining table.

The pandemic exposed the cracks in an already weakened safety net. As the one-year mark comes to a close, workers including Unifor members are taking part in the fight to improve basic standards for all workers.

Across jurisdictions, hundreds of thousands of workers earn less than $15 an hour. In fact, the Conservative government in Ontario marked its arrival to power in 2018 by clawing back two important workplace gains, among others: a $15 minimum wage and two legislated paid sick days for all. Those gains would have turned out to be very helpful in responding to a pandemic.

The pressure is mounting not only on the Ontario government to mandate permanent paid sick days, but for all provinces in Canada to recognize that employers don’t go the extra mile to provide workers with paid leave, and that ending the pandemic is dependent on people being able to stay home if they are sick. Unifor is calling for seven permanent paid sick days and 14 additional paid sick days in the case of a public health emergency.

The pandemic isn’t over, and the fight for workers rights continues north of the border.