City employees who kept the city of Charlotte running through the course of the COVID-19 pandemic are now asking city officials to rescue them. The Charlotte City Workers Union, a chapter of UE Local 150, held a press conference yesterday to demand hazard pay, real raises, shift differential and daily overtime.

The city is scheduled to receive nearly $149 million from the American Rescue Plan Act, yet the raises planned in the City Manager's proposed budget do not reflect this. 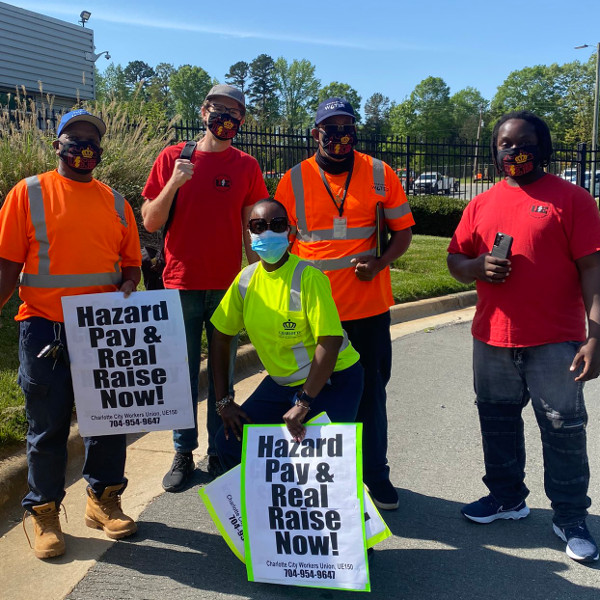 “Ever since the pandemic, we have been working making sure the city is running,” said Dominic Harris, who works for the city’s water department and is president of the Charlotte City Workers Union. “We were given five percent hazard pay for a few months, then it was cancelled at the beginning of the year, despite the pandemic continuing.”

Harris continued, “It seems that city workers have been put on the back burner. Not one conversation that happens between City Council, City Manager and leadership prioritizes us. The city works because we do.”

Kris Barrows, a LYNX Lighrail rail car mechanic and vice president of the Charlotte City Workers Union, said that “We are also demanding retroactive hazard pay for the light rail mechanics who have kept the trains running throughout the pandemic. Their omission from the original list of hazard pay recipients is not only insulting, but just another example of the City’s disregard for the health and safety of its employees and their families.”