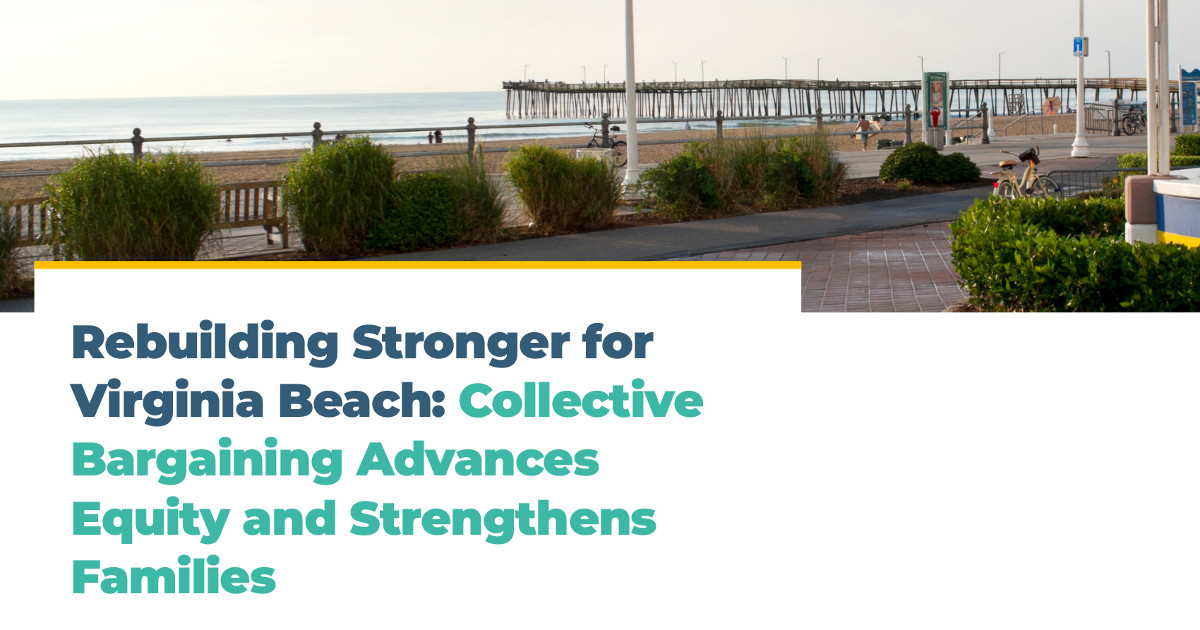 Two new reports published by a Virginia policy-advocacy group make the case that collective bargaining will bring benefits to both municipal workers and the communities they serve.

The reports, produced by the Commonwealth Institute for Fiscal Analysis, look at salary data from the cities of Virginia Beach and Newport News, and conclude that many public employees in both cities cannot afford to live in the cities they serve. They find that one in six full-time city workers in Newport News, and four in ten full-time Virginia Beach city workers, cannot afford to support themselves at a modest yet adequate standard of living. For workers with children, those numbers rise to five in six and nine in ten respectively — the vast majority of city workers.

Virginia, which until recently banned collective bargaining for public employees, has one of the biggest “pay penalties” for public-sector workers in the country. According to the reports, “Local public employees in Virginia are typically paid 29.9% less than their private-sector peers with similar levels of education, age, and hours worked.”

Furthermore, “Pension and health care benefits do not make up for these pay penalties. Employee benefits for local public employees in Virginia are less generous than in other parts of the country [... ] For Virginia as a whole, the estimated total compensation penalty for local employees compared to their private-sector peers is 28.0%, close to the pay penalty of 29.9%.”

Collective bargaining promotes pay equity by raising wages for public-sector workers to levels closer to that of comparable workers in the private sector. It also benefits Black and Latinx workers, and women workers of all races, by providing fair and clear standards. Both reports note that “This is important because past discrimination and ongoing barriers mean Black workers, Latinx workers, and women of all races are still typically paid less than white men with the same level of education and experience in both public- and private-sector employment.”

Both reports include testimony from city workers who are currently organizing with UE — testimony which highlights how collective bargaining is important not only to improve pay, but to secure respect, a voice at work, and decent working conditions.

Riccretia Clifton, a solid waste equipment operator in the Newport News Department of Public Works, told the authors of the report that “One of my main concerns is that while the city wants to call us essential workers, they don’t want us to have a say in our working conditions or our pay. I’m helping to build this Union because we as workers can fight for better pay and working conditions when we stand together!”

Louise Lindsey, an administrative assistant in the Infant Program of Virginia Beach’s Human Services Department, reported that clinicians in her department “are given workloads and client-to-staff ratios that are unreasonable, placing our health and safety at risk. This also violates the rights of those we care for. We cannot provide adequate care without adequate resources.”

The reports point out that collective bargaining will improve communication in city government, because it “provides a way for represented workers to formally express their ideas for how to improve their workflow and workplaces.” It will also improve democracy in local communities: “Having the experience of collective bargaining and union representation in the workplace even makes people — particularly younger people and those with less formal education — more likely to participate in other systems of democratic governance such as voting.”

Under a new law that went into effect this year, municipal workers in Virginia can form a union and bargain collectively with their employer — but only if the city council passes a resolution authorizing collective bargaining. This means that the UE organizing committees in both cities, in addition to building support for the union among their coworkers, have to build support for collective bargaining on the city council. They expect the reports produced by the Commonwealth Institute to be helpful with this task.

Both groups have been meeting with city councillors, and making progress. As Virginia Beach human services worker Christina Wilson-Darien told UE convention delegates in a video message, “We're coming together. It's coming slow but we're getting there.”