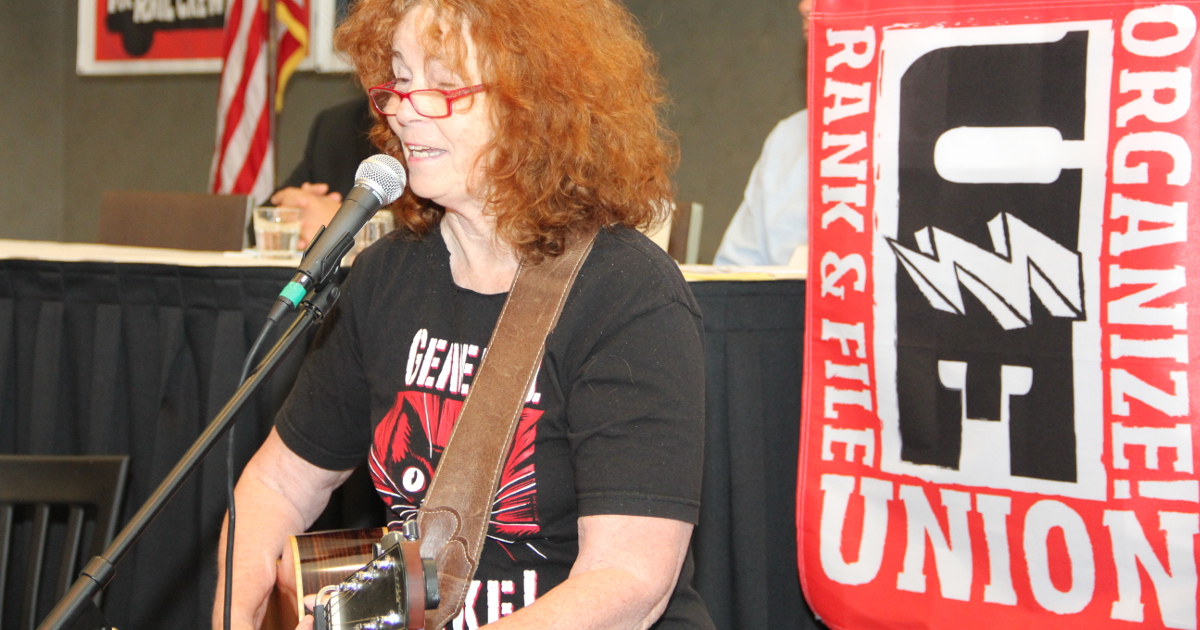 Pittsburgh “frontline” singer Anne Feeney, who performed at UE rallies, picket lines and conventions for over 35 years, passed away on Wednesday, from COVID-19.

Feeney told the UE NEWS in 2017, “I love going to picket lines,” and she could often be found wherever workers were in struggle. She played at a 1982 UE Local 610 rally in Swissvale, PA during their historic 6 1/2 month anti-concession strike against Wabco (now Wabtec). She played at rallies in North East, PA supporting Local 684’s first-contract struggle, and in Erie, PA sponsored by Locals 506 and 618 during national GE contract negotiations. She served as “minister of culture” for several high-profile national strikes and lockouts, including the Staley strike in the “War Zone” of Decatur, IL and the Frontier Casino strike in Las Vegas, both of which went on for six years.

Feeney also contributed to UE organizing efforts at the GE facility in Parkersburg, West Virginia in the early 1990s, writing and recording a song about Parkersburg workers’ struggle for a VHS tape produced by UE that was mailed to every worker.

She sang at at least five UE conventions, most recently in 2017. During the 2000 convention in Erie, PA, she sang “Solidarity Forever” at the reception inaugurating the international solidarity mural in the Local 506 hall.

In 2007, Feeney contributed a review of “The Big Red Song Book” of Industrial Workers of the World (IWW) songs to the UE NEWS. She noted that the songs of the IWW, a “singing union” renowned for both militance and inclusiveness, “embody the humor, philosophy and history of the working class.”

Feeney was a firm believer in the power of music not to simply entertain, but to create and strengthen bonds of solidarity. As she told the UE NEWS, “I can’t even imagine the civil rights movement without singing. I can’t imagine the early CIO days without singing. Music instills power and bravery.”

Reviewing Feeney’s album “Have you been to jail for justice?” in the UE NEWS, UE cartoonist Gary Huck lauded her “passion, progressive politics, hell-raising humor, wrapped in a well-honed craftsmanship that combines the genres of folk, rock, reggae and the blues.”

Feeney’s daughter Amy Sue Berlin asks that in lieu of sending flowers or cash donations, mourners make a donation to the Thomas Merton Center in her honor.