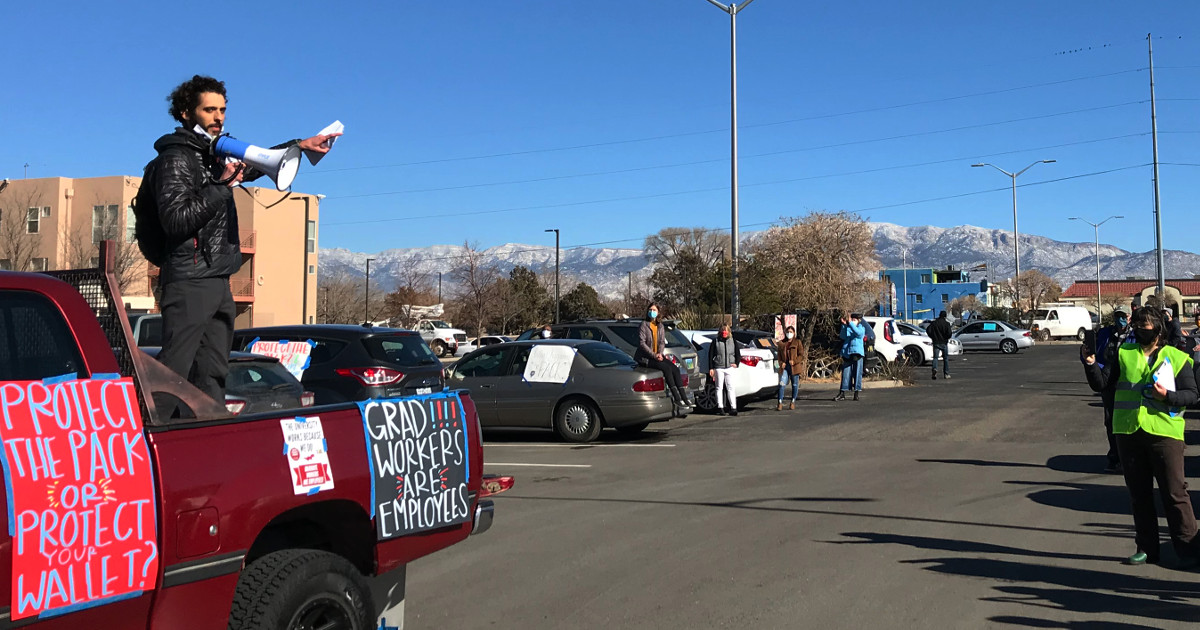 Over 2,500 graduate workers at the University of New Mexico and New Mexico State University are making history as the first graduate worker unions to seek recognition in the state of New Mexico. They are also the first large bargaining units to unionize under New Mexico’s new “card check” union laws for public-sector workers, which provide for union recognition after a majority of workers have signed cards indicating their desire to join the union.

The University of New Mexico Works Because Graduate Workers Do

A union was still the goal and in late 2019 this group decided to organize with UE, due to UE’s democratic structure. When the pandemic hit New Mexico in March 2020, those that had been organizing under the radar connected with a second group of grad students, who had written a petition calling on the UNM administration to provide graduate students with more resources during the pandemic. Once these networks were created, the organizing committee held online trainings, hosted weekly virtual meetings, made phone calls, and sent emails to recruit their colleagues to join the organizing committee. The issues driving the organizing effort included non-existent summer funding, poverty wages, poor insurance, and a lack of protection for international students.

With over 100 workers on the organizing committee at the start of the Fall 2020 semester, the union launched a card drive. At first, UNM graduate workers were collecting physical union cards, but soon switched to electronic cards given the circumstances of the pandemic. On October 9, United Graduate Workers of UNM publicly announced the union drive in a virtual town hall with over 100 participants. They filed for recognition with over 1,000 union cards — a super-majority of the bargaining unit — just two months later on December 9.

The university administration hired expensive outside lawyers to argue that graduate workers are not employees and should not be covered by New Mexico’s Public Employee Bargaining Act. Graduate workers fought back and held a car caravan protest where hundreds of people came together to remind UNM that “the university works because grad workers do.” From there, the union launched a bargaining survey to determine the most pressing concerns of union members and negotiate a fair contract that includes all graduate workers’ voices.

Because the UNM administration chose to contest the workers’ union rights, the New Mexico Labor Relations Board held months of hearings about the union petition. During the hearings, some of the university’s witnesses lied outright about graduate workers' jobs and claimed they do not provide labor of value to the university.

UGW/UE also hosted a week of action to call public attention to UNM’s union-busting tactics. The week included a virtual rally attended by local politicians, community members, and national allies. Throughout the week, grad instructors also held teach-ins in their classes to inform undergrads of the union's past and current efforts. Grad workers also showed up to Board of Regent meetings, calling public attention to the fact that regents had awarded the president a $59,000 bonus at the height of the pandemic.

As UNM administrators have continued to dig their heels in, continuing to try to use the legal process to delay meeting graduate workers at the bargaining table, United Graduate Workers of UNM is gearing up to take action this Fall to win recognition from the administration. United Graduate Workers of UNM has established themselves as a union and is determined to take whatever action is necessary to win justice for UNM graduate workers.

Starting in the fall of 2018, graduate workers at New Mexico State University in Las Cruces began holding open meetings with the Dean of the Graduate School to try to address the lack of health insurance. After over a year of meetings and “task forces” that went nowhere, the graduate workers decided that more direct action needed to happen if this issue was going to be addressed. They decided to start organizing a union for graduate workers at NMSU.

In the spring of 2020, the NMSU graduate workers, through their connections to graduate workers at UNM, reached out to UE for help organizing. Over the course of the summer and fall of 2020 during lockdown, NMSU Graduate Workers United held virtual town hall meetings and organizing trainings. During the pandemic, NMSU still did not provide insurance to students, graduate workers had to fight to win free PPE from the school, and they faced a pay decrease as tuition was raised while salary stayed the same.

A particular challenge for organizing during lockdown was relying on cold-contacting fellow workers via email rather than through office door knocking. NMSU graduate workers sent hundreds of emails to their colleagues as they began to organize.

In the spring of 2021, with the help of UE, the NMSU organizing committee began a campaign to sign up a majority of graduate workers on union cards. During the spring, graduate workers collected union cards electronically from over 50 percent of the 900-worker bargaining unit. Toward the end of the semester, leaders from the UNM campaign and UE staff came to Las Cruces to join NMSU workers in knocking doors across town, signing up graduate workers to be represented by UE.

New Mexico graduate workers James Lewis (NMSU) and Samantha Cooney (UNM) provided most of the content for this article.