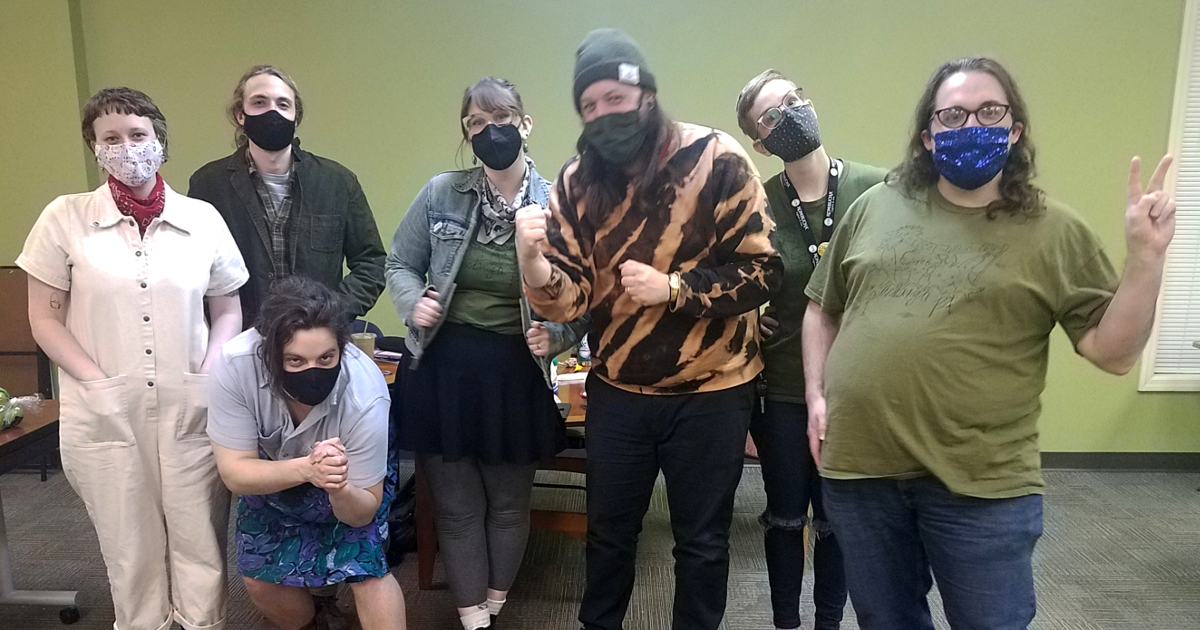 UE Local 667 continued to gain ground in its ongoing fight for living wages at the East End Food Coop in recent contract negotiations. In addition to winning substantial wage increases over the life of the three-year contract, the local negotiated pathbreaking contract language on accommodations, diversity and inclusion in hiring, on-the-job protections, and bereavement.

“I had been thinking about our 2021 contract negotiations since becoming more active in our union two years ago,” said Local 667 President Berry Erikson. “I’ve had the ability to watch how our last contract played out, which was very useful when we began to plan our ‘wish list.’”

Throughout the negotiations, members wore a button designed by Chief Steward Candace Davis, who was also on the negotiating committee. The buttons said, “We Deserve $15 A Living Wage Now!”

When the workers at the East End Food Coop organized into UE over six years ago, the starting wage was $9 per hour with no path to get to the top of the wage scale. In its first contract, the union was able to raise the starting wage to $10.50 an hour and negotiate a 10-year wage progression schedule to reach the top of the pay scale for each of the four different wage levels. In the next negotiations two years later, the union raised the starting wage to $11 an hour and reduced the wage progression schedule to eight years.

In this year’s negotiations, the union won a starting wage of $12.50 an hour – higher than the starting wages at Walmart and a large local grocery store chain – and reduced the wage progression schedule to five years. As a result of the increase in the starting wages and the compression of the wage progression schedule, members’ wages will increase by an average of nearly 16 percent over the life of the contract. Members’ health insurance contributions will remain the same during the life of the contract.

The union was also able to reduce the number of years of service that it takes to reach the maximum of five weeks of paid time off (PTO) from six years to four years, which will result in most members seeing additional PTO. In addition, the union negotiated more unpaid time off that members can use instead of using PTO. Full-time employees will now have 80 hours of unpaid time off and part-time employees will have 40 hours of unpaid time off during the calendar year. The union also gained an additional paid holiday – Martin Luther King, Jr. Day — and replaced the Easter Holiday with Juneteenth.

One of the members’ main concerns going into contract negotiations was winning accommodations for front-end cashiers, who were required to stand for hours on end in one place. The new contract commits the coop to providing cashiers with seating. In addition, the union negotiated cross-training language for cashiers who want to train in other departments, so that they don’t have to work the front end for their entire shift. After a cashier completes the 90-day cross training, they will receive a higher Level 2 wage rate based on their years of service.

The union also negotiated pathbreaking contract language on diversity and inclusion, which commits the coop to establishing a Diversity and Inclusion Committee “made up of representatives from management and the union for the purpose of recommending, monitoring and enforcing diversity and inclusion programs, including hiring and the anti-harassment policy at the EEFC.”

“The diversity committee was created to address the very real problem of implicit bias in the hiring process at the East End Food Coop,” said Recording Secretary Jared Evanoski, who served on the negotiating committee. “The committee provides bargaining unit members the ability to participate in the hiring process in an advisory role, keeping management honest regarding our goal as a union local to make the staff at the coop better reflect the racial diversity of the community in which we exist.”

In addition to the new contract, the Union negotiated two Memorandums of Understandings (MOUs) with the coop. One MOU commits the coop to eliminating the armed security guard and replacing them with a Level 3 bargaining unit member. The second MOU commits the coop to meet with the Union and bargain over the effects in the event that the U.S. adopts a single payer Medicare for All system.

“This was my first contract negotiations and working under the COVID restrictions certainly complicated aspects of our work,” said Erikson. “But I do truly believe that the pandemic made it easier for us to bargain for the gains that we ended up receiving. I think we were all bolder and firmer since we were working with a finite amount of time and we were fighting for our bargaining unit members who have lived through so much in the last year. It was an exhausting and gratifying experience. I’m very hopeful that this contract will lead to even more gains in 2024. We laid the groundwork, now we just have to keep fighting.”