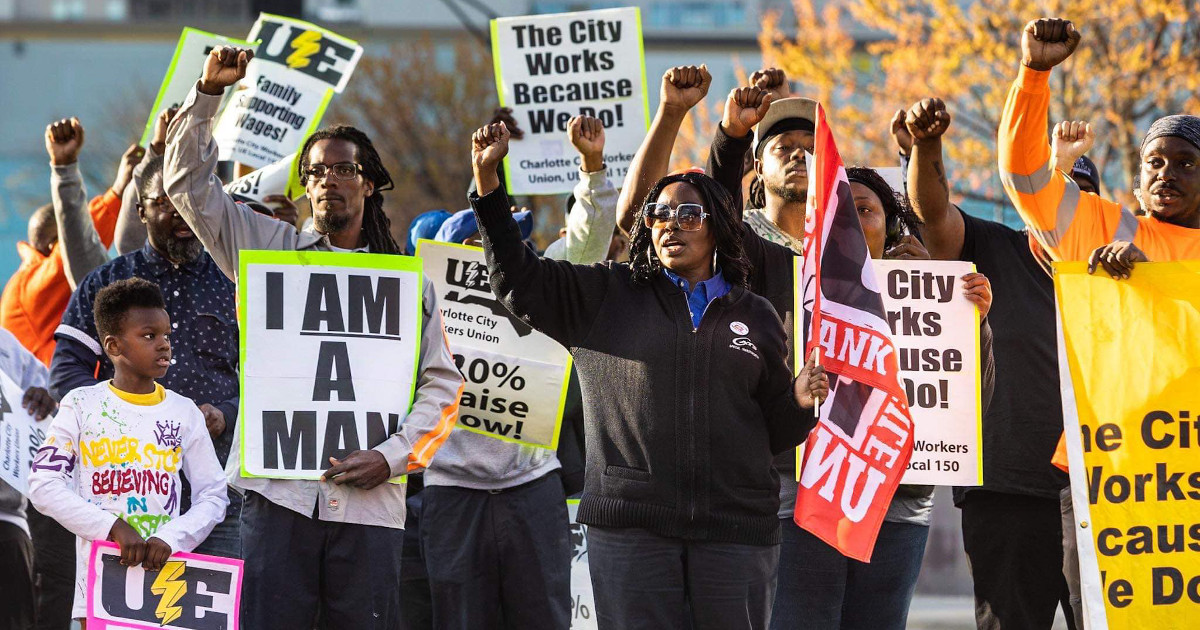 “When city workers are under attack what do we do? Stand up fight back!” chanted city workers as they marched in the streets and occupied a downtown intersection before attending the Charlotte City Council Budget Hearing on March 28.

The Charlotte City Workers Union chapter of UE Local 150 has been organizing a campaign to seriously raise the wages this year for city employees. An action on February 28 was attended by over a hundred city workers, including bus operators in the SMART union, responding to the recent on-the-job shooting murder of Ethan Rivera, a young bus driver. UE Local 150 members also called the name of Robert Taylor, a sanitation worker killed on the job by a motorist last year.

In back-to-back actions two months in a row, city workers and other community and labor allies packed the City Council chambers demanding changes and raises during the deliberations for the city budget for fiscal year 2023. The union is demanding the city bring wages up by 10 percent to make up for drastic inflation. Workers are also requesting paid daily overtime, shift differential pay and a universal sick leave policy.

A single worker needs to earn at least $62,122 per year to raise even a single child in the city, according to the Economic Policy Institute. Currently, 75 percent of city workers make less than that. In Solid Waste, the lowest-paid department, 97 percent make less.

“City Council needs to pass a budget that enables city workers to support our families and afford to live inside this city,” said Dominic Harris, president of the Charlotte City Workers Union chapter of UE Local 150 and a crew leader in the Water Department.

After rallying on March 28 in Marshall Park and speaking to the news media, city workers, community allies and faith leaders marched in the streets to Government Center, where they occupied a street intersection. Afterwards, they went inside to hear from eight city worker UE members that signed up to speak at the city council meeting.

“We work hard to take care of the city, all we ask is for the city to take care of us,” said Rory Pegram, Solid Waste Services laborer and member of Local 150. Pegram continued, “People come in from out of town and they say this city looks great. I get compliments but I go home sad because I cannot afford to live in Charlotte. I am tired of just surviving, I want to live. I am struggling.” Pegram, who cannot afford rent, is currently living out of a hotel and paying week-to-week and has to work a second job to pay his bills, like many other full-time city employees.

It’s About More than Wages

The union’s fight is about more than just wages. City workers across many departments have reported harassment and unsafe working conditions, especially in Solid Waste Services. In that department, many women have reported sexual harassment to management only to have it swept under the rug, and have accused management of creating a climate where workers feel they can get away with unwarranted touching and verbal harassment.

“We are dealing harassment in the workplace,” said Shaequontia Gaddy, a Local 150 member and senior equipment operator in Solid Waste Services. Gaddy continued, “We are spoken to inappropriately. We are not judged based on character. We are being sexually, verbally, mentally and emotionally abused. We are bullied and disrespected based on our gender, sex and identity change.”

At a recent union meeting, workers vowed to stand in solidarity with the women in Solid Waste Services to end the harassment.

Workers in Solid Waste have been joining the union in big numbers recently. Eight Solid Waste workers recently signed up to go through the UE steward training program to help strengthen the union, bringing the total number of new stewards for the chapter to 19.

City workers across North Carolina and Virginia are organizing as part of the Southern Workers Justice Campaign. Municipal workers across both states have been rallying and speaking up at budget hearings to fight for raises and collective bargaining rights. On March 26, workers from across North Carolina were invited to a statewide summit to share lessons and budget proposals, and to discuss how to better implement the UE resolution against racism that calls on municipal workers to organize to reallocate funds from overfunded police departments.

Video of the Charlotte City Workers Union actions from Februray and March can be viewed on the UE Video page of this website.