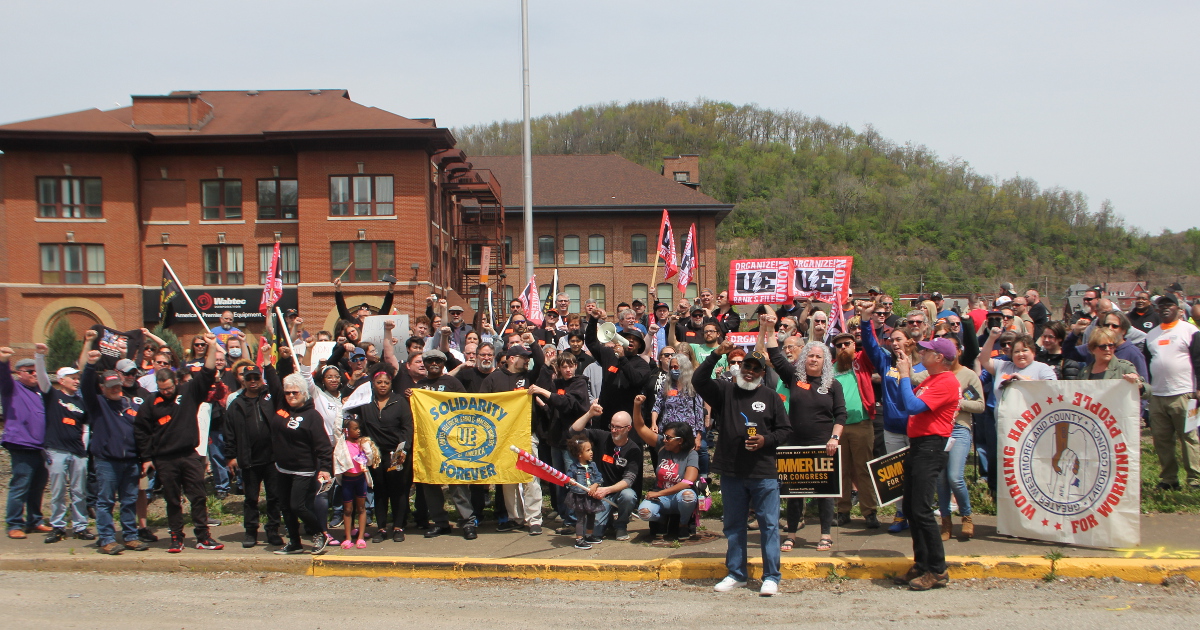 Hundreds of UE Local 610 members and supporters rally at the Wabtec plant in Wilmerding on April 30.
May 12, 2022
Wilmerding, Pennsylvania

On Monday, May 2, UE Local 610 gathered at the Grapeville Fire Hall in Southwestern Pennsylvania and ratified a new three-year agreement with their employer, Wabtec. The local won key gains through an aggressive contract campaign which included ongoing shop floor activities by rank-and-file members and strong participation from other UE locals and allies. 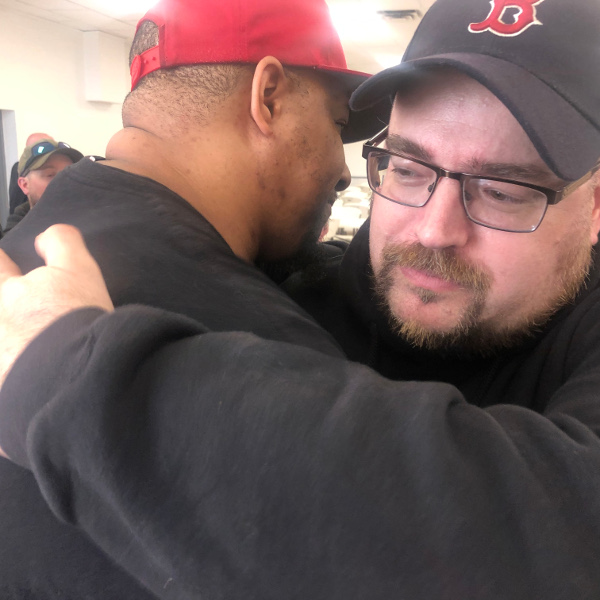 President Antwon Gibson explained, “We told the company from day one that we would not take a concessionary contract back to our membership. In light of the company’s financial success, the sacrifices our members made coming to work during a global pandemic, and the rising costs of everything, we needed real improvements to our contract.”

Details of the Agreement

Despite Wabtec desperately trying to move the local onto its much more expensive “corporate benefit plans,” the new agreement will keep union members on their existing health insurance with no increases in plan design costs (deductibles, co-pays, out-of-pockets) for the duration of the contract. The company's proposed medical plan would have more than doubled employee deductibles and out-of-pocket maxes, offered less coverage on services, and would have allowed Wabtec to unilaterally increase employee plan design costs at any time.

“We have fought over the years to get insurance plans that our members and their families could actually use. I am proud that we were able to keep what we have,” said Rubber Plant Divisional Steward Ian Glasgow.

“The win on insurance was big,” said Gibson. “Looking at the bigger picture, we know the only way forward for working people is a universal healthcare system like every other industrial country on earth has. With guaranteed healthcare, our unions and fellow workers would have more power in dealing with employers because we wouldn’t need to rely on the boss for insurance. Healthcare should be a right and everyone in America should be covered.”

The local retained its pension (which the company unsuccessfully tried to freeze until the last hours of bargaining), added Veterans Day as a paid holiday, and won general wage increases of $.85 per hour in the first year, $.75 per hour in the second year, and $.75 per hour in the third year. Shift differential and life insurance benefits were also increased.

While agreeing to some amount of continuous operations at the Greensburg plant, the union fought back all company concessions, including language that would have allowed Wabtec to mandate overtime at their discretion, eliminate daily overtime pay, unilaterally implement new rules and policies without agreement from the union, establish new jobs without mid-contract bargaining, extend the regular workday, and replace paid breaks with unpaid breaks.

Particularly egregious was a company proposal that would have allowed them to terminate an employee on leave after 12 months (regardless of disability status). This shameful proposal particularly struck home because a Local 610 member was recently out on long-term disability for over 12 months struggling with cancer. That member would have been terminated had the company’s proposal been in effect during his time on leave. 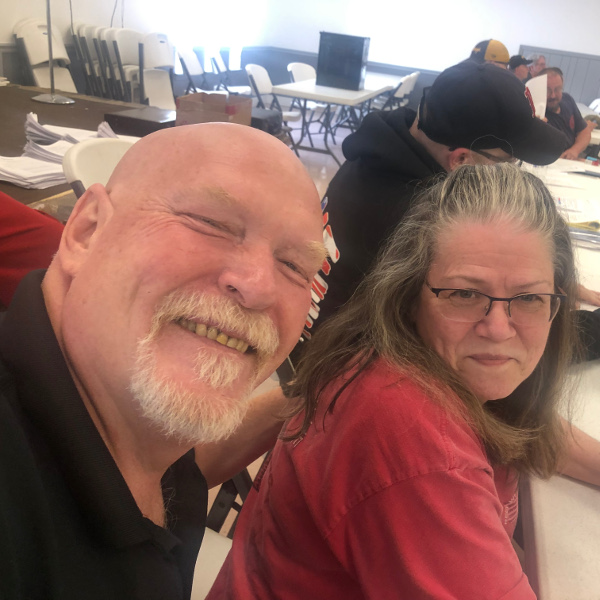 “We mentioned the impact of the company’s proposal during our membership meetings last month and pointed to one of our members who would have been kicked to the curb under the company’s proposed language. That union brother had been fighting cancer for several years,” noted Assistant Chief Steward Don Folkmire. “Because we are protected while on long-term disability, he was able to come back to work after recovering from cancer. That story really brought everyone together in recognizing what this was all about: Local 610 collectively working to advance ourselves and protect the most vulnerable amongst us.”

UE Local 610 was chartered in 1937 representing workers making airbrakes and components for the railroad industry at the then-Westinghouse plant in Wilmerding. The local has also been representing workers at the Wabtec Rubber Plant in nearby Greensburg for over 30 years.

The Wilmerding plant was built in 1889 and was the flagship location for the production of the modern airbrake system. The workers and community of Wilmerding were, quite literally, the very foundation of the corporate giant that is now Wabtec. Despite this history, the company announced plans to abandon the working people of Southwestern Pennsylvania and close the plant. The announcement was delivered in the middle of bargaining, with a projected end date within 18-24 months.

Despite the announcement, union members at both plants remained undivided. 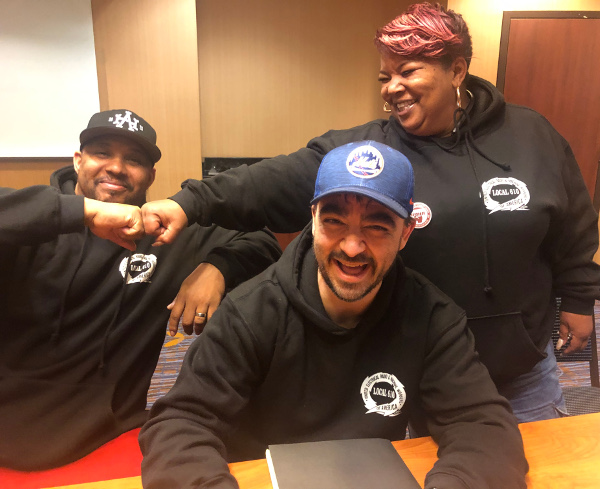 “Any attempt by the company to separate the Greensburg and Wilmerding workers would never have succeeded. We grew closer as union members. Our struggle was theirs, and vice-versa,” said Business Agent Rob Mickinak.

While the local continues to evaluate next steps on how best to approach the ongoing issue of a potential plant closing, it was necessary to win additional protections during bargaining in the event of a shutdown.

The local won language maintaining bargaining unit work at the Wilmerding plant, along with supplemental job movement options in the event of a plant closing. Additionally, the local bargained language preventing the company from replacing union work with non-union personnel in the event operations wind down in Wilmerding, and obtained significant increases to employee severance in the event of a lay off. Importantly, the union contract will continue to be recognized as the agreement outlining terms and conditions of bargaining unit work performed at the Wilmerding plant in the event the plant is closed and reopened.

As part of the campaign for a fair contract, Local 610 members regularly held union meetings and rallies during breaks at both plants. The rank and file also coordinated days when union shirts and stickers were worn. Members in Greensburg proudly honked their car horns arriving and leaving the plant as a daily reminder to management that the workers’ just demands would not be silenced.

“The executive board and membership worked hard over the last months to organize a campaign to win a fair contract,” said Chief Steward Artie Sinclair. Recording Secretary Lois Smith added, “Getting organized and communicating as much as we could back to our membership was really helpful for us. We effectively used group text messages to quickly get word back to everyone on meetings and bargaining updates.”

Several union membership meetings were held after work in between bargaining sessions to discuss the status of negotiations and strategize about next steps. During a particularly lively meeting on April 21, the local’s rank and file unanimously voted to authorize a strike if necessary.

Salary Divisional Steward Jim Chandler remarked, “It was because of everyone working together and trusting each other that we got the best agreement we could under these difficult circumstances.”

On Saturday, April 30, hours before the contract expired, the local held a rally demanding a fair contract at Wilmerding Park, steps away from the Wilmerding plant.

Leading up to the rally, the local organized a committee that reached out to the greater Wilmerding community to keep them informed on the union’s contract fight. The committee circulated leaflets and had one-on-one conversations with Wilmerding and Mon Valley residents at local businesses, civic centers, and areas with relatively high foot traffic. The local also brought a delegation to address Wilmerding’s April city council meeting. 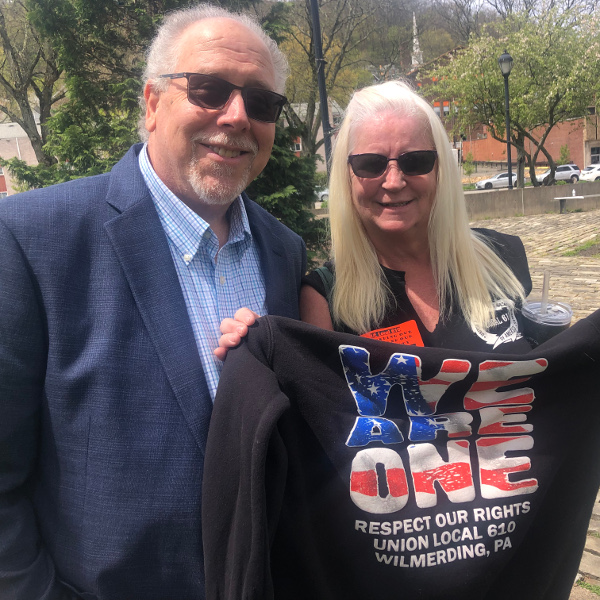 “We reached out to the community and let them know what was going on,” said Financial Secretary Rose Schmidt, whose connections were instrumental in generating turnout for the April 30 event. “It was important that they heard it from us, and not the company. In particular, Mayor Jakub and the East Allegheny teachers’ union helped spread the word for our rally.” (Greg Jakub is the mayor of Wilmerding, and the East Allegheny Education Association represents educators who teach and provide other educational services to Wilmerding students.)

The rally was well attended by the local’s membership, and members of UE Locals 170, 506, 613, 622, 625, 667 and 690 came from around Western Pennsylvania and West Virginia. The Kenyon College undergraduate workers currently organizing their own workplace with UE brought a large delegation from Gambier, Ohio. The event was also well attended by Southwestern Pennsylvanian unions, organizations, and political leaders. 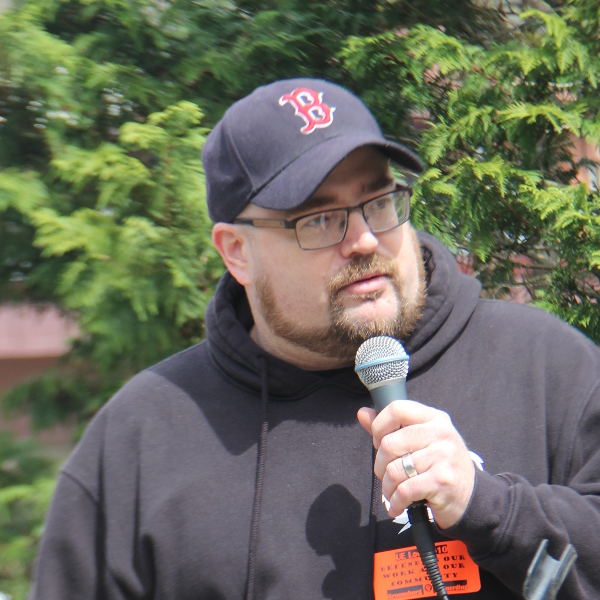 “We’ve had a rough couple years as essential employees,” said Local 610 Vice President Jeff Kohler at the rally. “We worked our butts off to make their profit. The company decided to thank us by telling us they were going to close Wilmerding and take product lines out of Greensburg.” He described the company’s demands for concessions, but told the crowd that their support “gives us all the firepower we need. We’re going to fight for everything we deserve, and we deserve everything after all we’ve been through.” 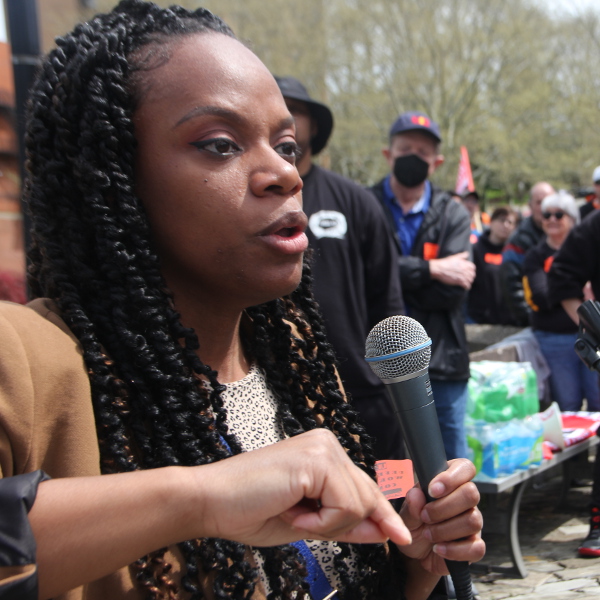 State Representative and UE Local 610-endorsed Congressional candidate Summer Lee declared that “the whole strength of Pittsburgh as a union town” was behind Local 610. Pittsburgh Mayor Ed Gainey reminded the crowd that corporations like Wabtec “take and don’t give” and reminded the crowd that “the only way we can change that is in the struggle.” (Video of Lee’s and Gainey’s remarks is available on the Braddock Films Facebook page.)

UE General President Carl Rosen told members of Local 610 that the whole of the national union was behind them and that “we’ll be wherever we need to be” to support their struggle. Addressing the company’s threat to close the plant, he emphasized that “Giving concession doesn’t save your jobs, it helps finance the company moving out of town,” and praised Local 610 members for understanding that and resisting concessions.

“They’ve got money,” Rosen concluded, but “we have people, we have solidarity.”

Eastern Region President George Waksmunski pledged the support of the region as well. “We will not stand idly by as Wabtec tries to destroy this community.”

Alison Oniboni of Local 613 read a poem she wrote for the members of Local 610, which recognized their struggles as “essential workers” facing the threat of a plant closing and declared that “a threat to your family’s livelihood is a threat to mine. And we stand with you to fight the fight … because WE are all UE.” 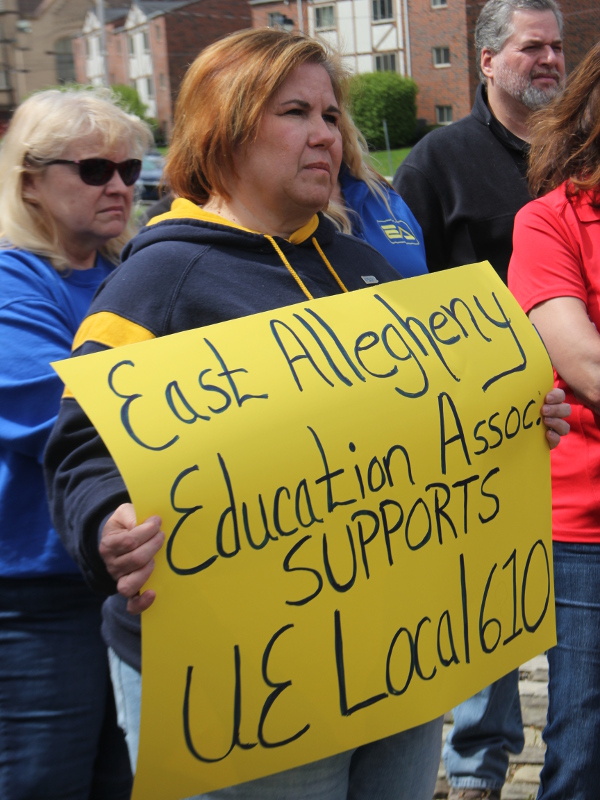 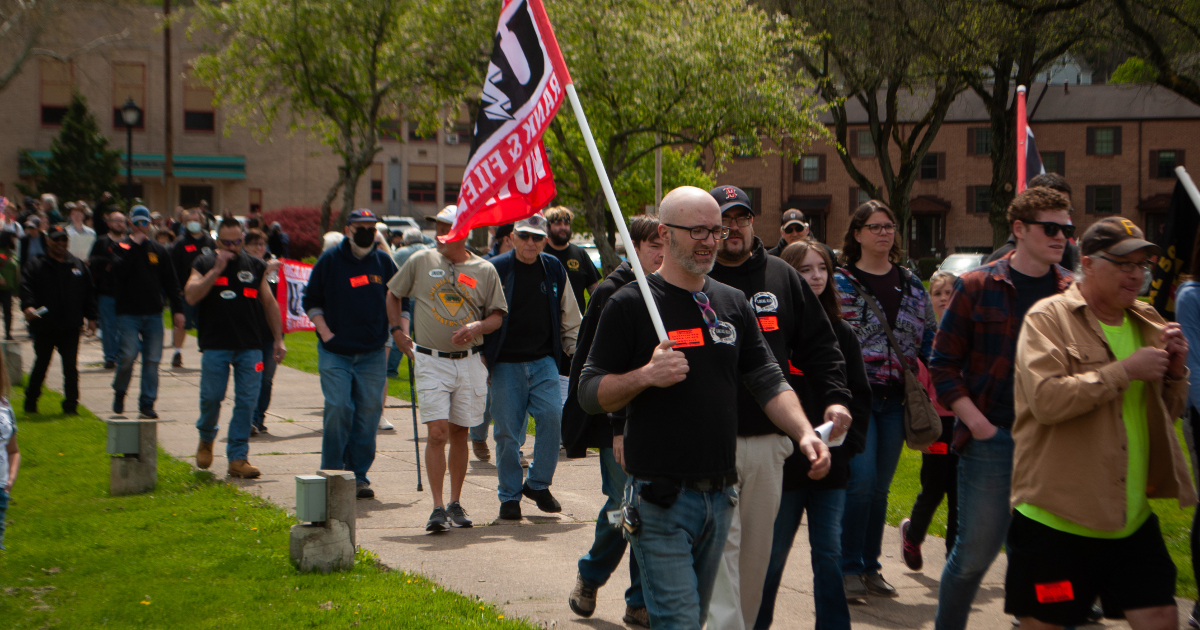 Rally participants march from Wilmerding Park to the Wabtec plant a block away. More photos from the April 30 rally are available on the UE Facebook page.

The company felt the pressure generated the local's contract campaign and the looming threat of more aggressive actions if an agreement was not reached.

“In the end, the actions of our membership, and the support of the surrounding community, including solidarity from many local unions, organizations, and political allies, gave us the power we needed to get a fair contract,” Gibson concluded.

The new contract will expire May 1, 2025. Local 610 is one of UE’s oldest locals. Its members manufacture rubber products and airbrake systems for the railroad industry.