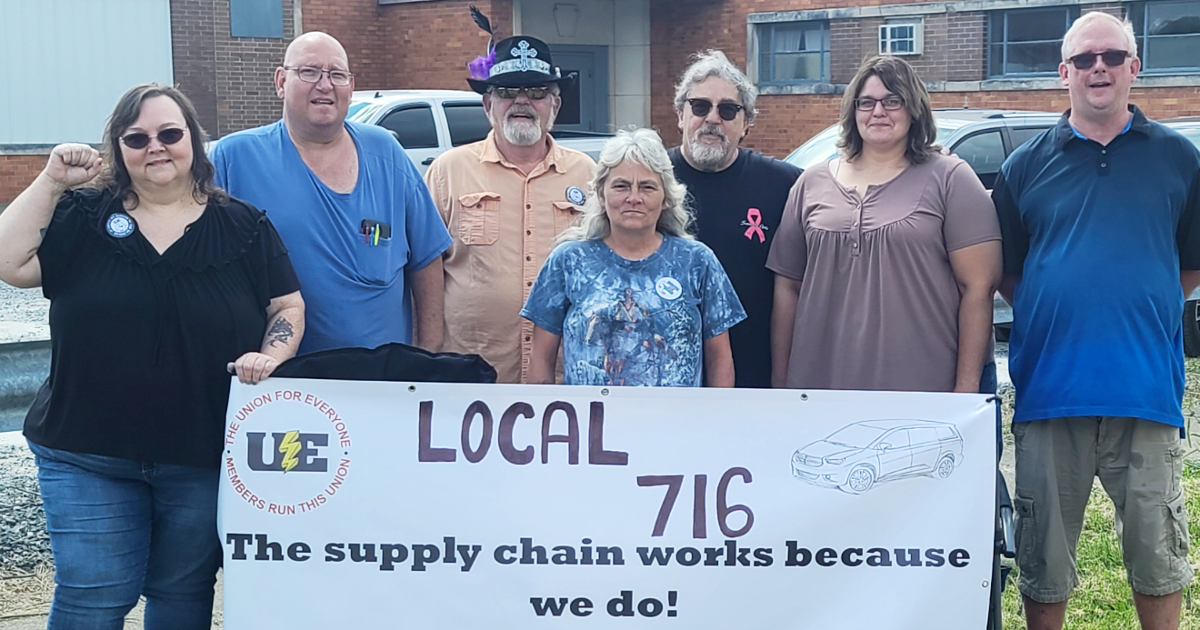 The new UE national contract with Hallcon Corp., covering approximately 2,000 drivers in six UE locals who work in 16 states, will increase wages by up to 22 percent over the next four years, delivering on UE members’ demands for “dollars, not dimes.” Across-the-board wage increases in the first year of the contract alone range from six percent to as high as 13 percent, with drivers in California seeing a $2.10/hour increase to their base wage. The contract was ratified on September 30.

Drivers at Hallcon Corp. work around the clock. They drive passenger vans, picking up and dropping off railroad engineers and conductors throughout the country. Their industry — in which Hallcon is one of three major contractors — is best understood as similar to a cab service for the employees of a single company. Hallcon secures contracts with the “Class I” railroads (the major freight railroads) and drivers pick up and drop off rail crew members wherever their shifts begin or end: in the desert, in the mountains, in isolated rural areas, in the hearts of big cities, and everywhere in between.

Decades ago, this work was performed by unionized railroad employees. Seeking greater profits, the railroads contracted out these jobs to a network of passenger van operators, including Hallcon. Overnight, stable high-wage union jobs became minimum wage jobs with no health insurance, no paid time off, and flexible schedules subject to constant change.

In 2010, 150 drivers at Renzenberger (as Hallcon was then called) in Chicago formed the first legitimate trade union in the industry when they formed UE Local 1177. They won a first contract that raised wages, provided paid time off, and important protections against discrimination, unfairness, and abusive scheduling practices. Since then, Hallcon workers from New Jersey to California have joined UE, and UE now bargains a national master agreement with Hallcon that covers over 2,000 drivers.

Although UE locals bargain with Hallcon, it is the immensely profitable railroad corporations that, through their contracts with Hallcon and other contractors, ultimately set the terms for wages and conditions in the industry. As UE was bargaining with Hallcon, railroad workers were also pushing for a new contract — and approaching a potential strike deadline in mid-September. (At this writing, some rail unions have ratified agreements while others have rejected them.) UE members joined multi-jurisdictional rallies by railroad workers in Fort Madison, Iowa, Galesburg, Illinois, Southern California, and Arizona, where they met up with officials in the rail unions SMART and BLET, looking to build bridges. “We know we have to build power in our industry,” said Doris Kissee of UE Local 716. “We will someday sit down directly with the railroads to get what we need.”

At the beginning of the summer, UE members were poised to take advantage of the leverage that workers have in the current labor market. “We began bargaining with high demands, said Larry Hopkins, Local 1177. “Many drivers worked through the pandemic,” and were expecting significant wage increases to reward them for their hard work.

Hallcon gave significant mid-contract wage increases in January of 2022 in the Central States and the South — and began bargaining with the attitude that their work was already done. “We laughed when they said they wanted credit for earlier raises they did not involve us with,” said Nandell Baines, Local 977. “Why would we ask members to give credit for something they already have?

“We knew we had to fight for more, and we will continue to do that,” she added. 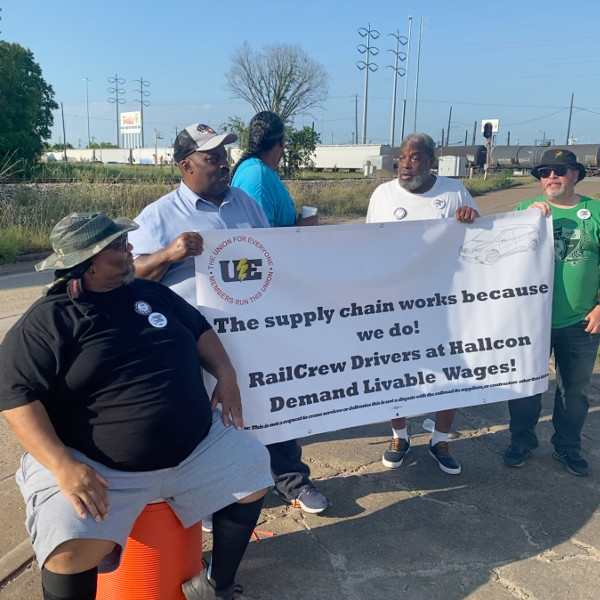 The UE bargaining committee met company officials 16 times in California, Texas and Illinois, as well as many online sessions in between, which saved the locals a significant amount of money.

As the initial expiration of the contract on September 1 approached, UE locals began holding “bannering” actions in multiple locations outside rail yards in order to let Hallcon’s customers — the railroads — know that UE members are in a fight for “Dollars not Dimes.” By letting the contract expire on September 1, the union was able to pressure the employer to give more. “We were organizing for a strike,” said Jessica Van Eman, Local 1477, but in the meantime the union was able to win an acceptable settlement. “As we listened to where the members were at, the boss’s offer was good enough for this round of the fight,” she explained.

In addition to significant wage increases, the UE bargaining committee fought for and won a number of significant improvements to contract language covering safety on the job, overtime rules, board rotation for road drivers, road driver board stability, and protections during discipline.

The new contract also includes improved paid time off, a death benefit, improved holiday pay, payments for cell phone use and a host of improvements to wage language — including longevity pay. “We have been fighting for this Company to recognize the seniority of drivers for all the time I have been with Renzenberger and now Hallcon,” said Clarence Hill, Local 1177. “Now we achieved some real gains for those that stay with the job for two years or more.”

Beginning the second year of the agreement, those workers will see longevity wage increases of from 2.5 up to 4.5 percent, in addition to their regular across-the-board increases.

“In the end, we needed more, but our members began telling us the offer was acceptable”, said Diana Martinez, Local 1077. “We know we will have to continue to fight, defend our contract and keep building.”

“We might not have gotten everything we wanted and fought for, but we are moving forward,” added Hopkins. 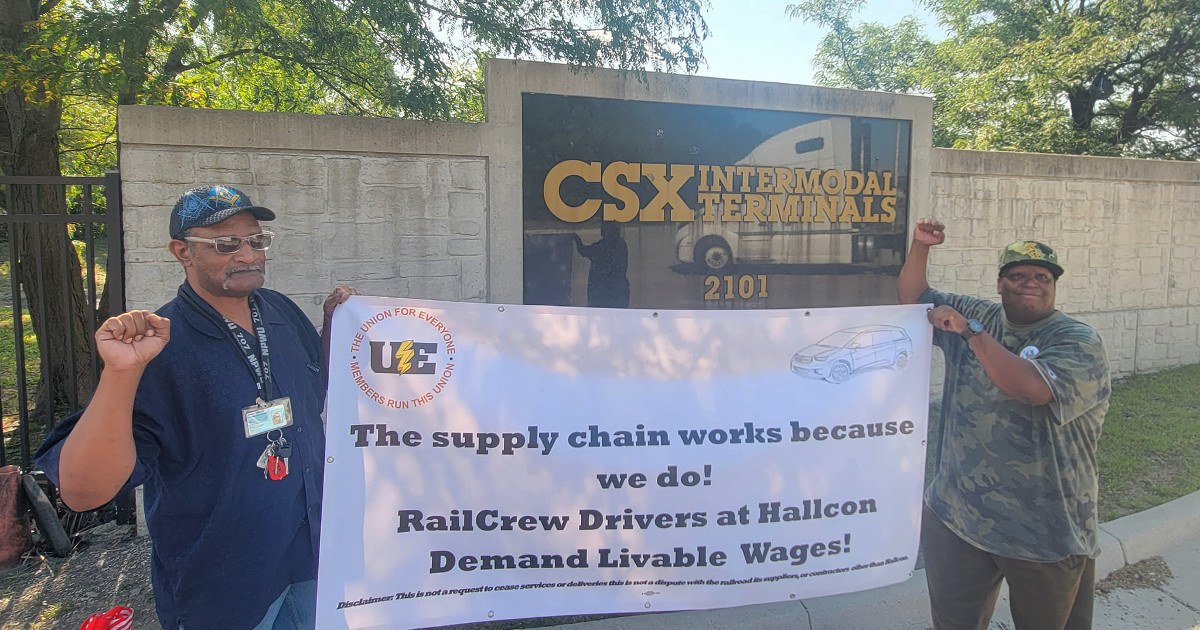 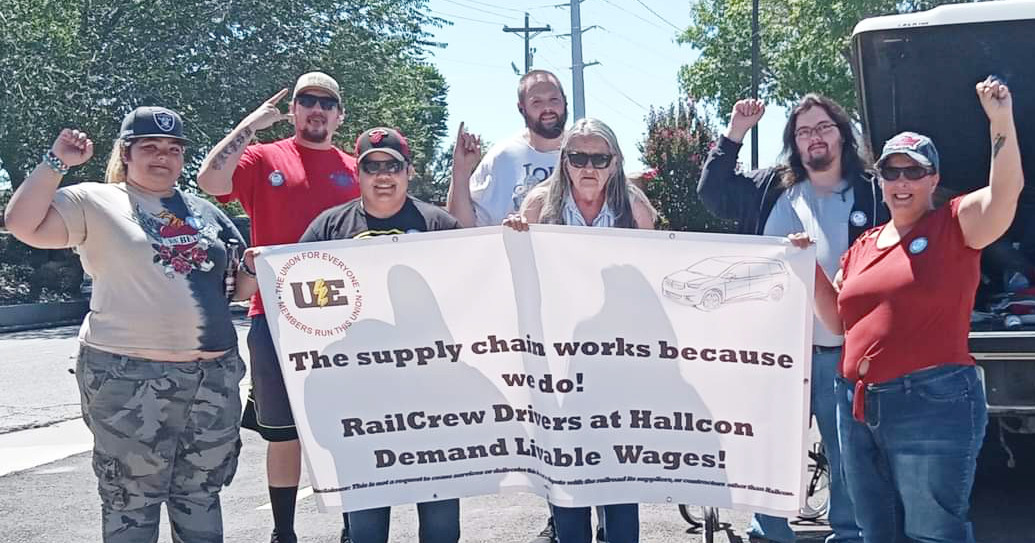 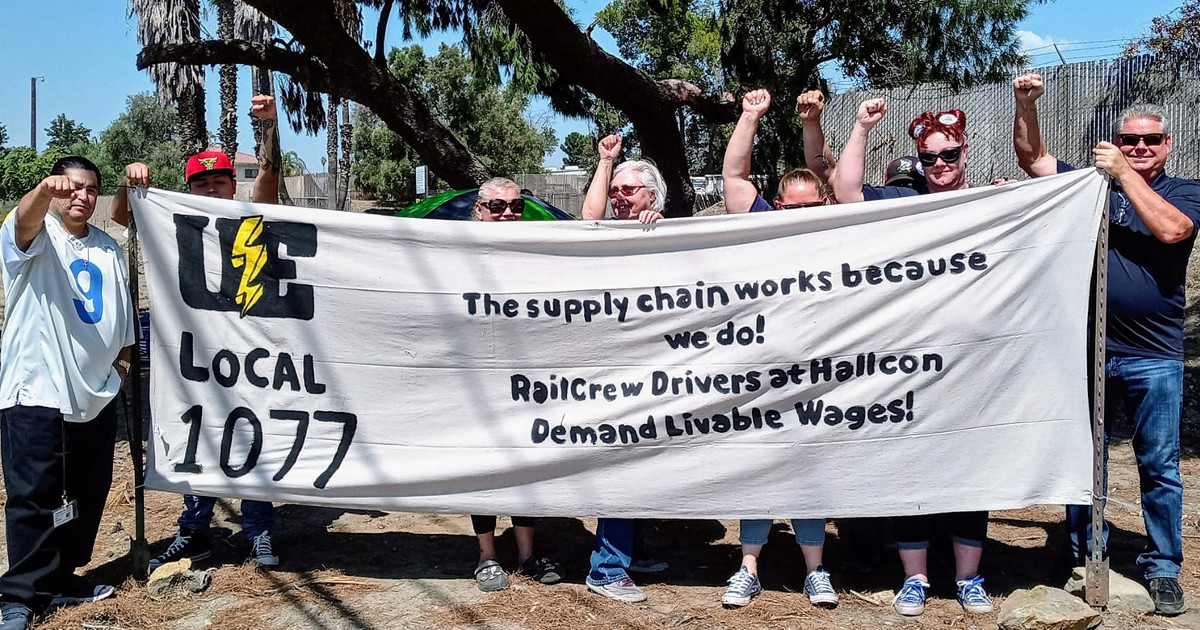