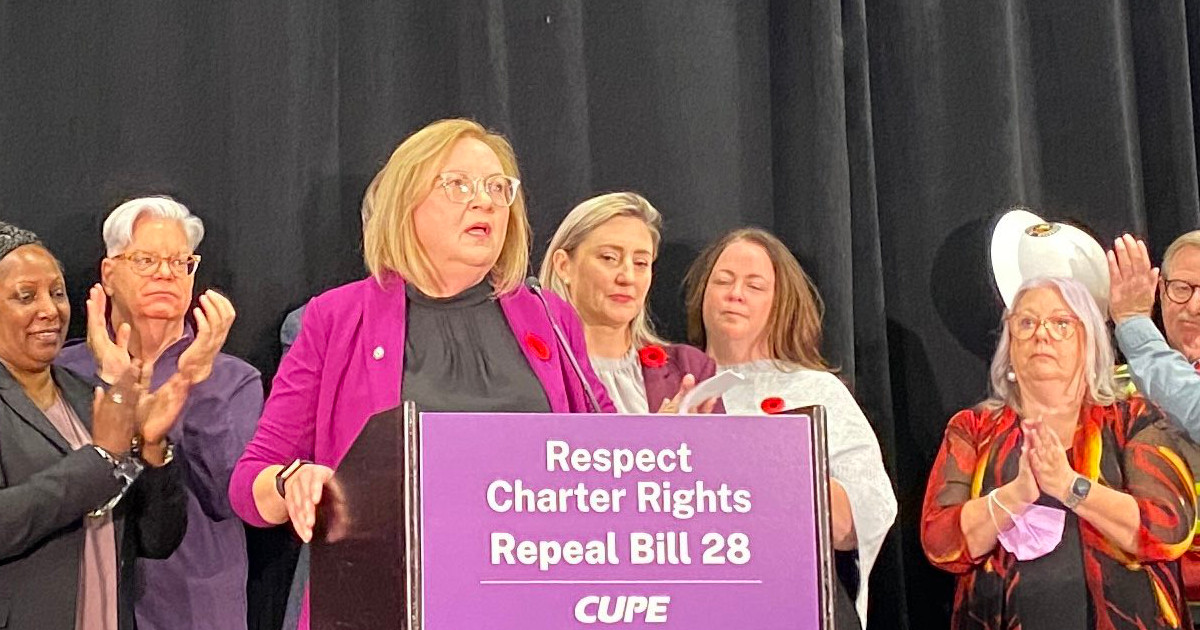 Earlier this week, workers in Ontario won an inspiring victory against their right-wing government. Premiere Doug Ford’s government passed a special bill in an attempt to impose a contract on 55,000 education workers and revoke their right to strike. Those workers went on strike anyway, receiving support from the rest of the province’s labor movement (including important support from UE’s close Canadian ally Unifor), and on Monday the government announced it would withdraw the bill.

The 55,000 education assistants, early childhood educators, custodians and administrative assistants represented by the Canadian Union of Public Employees (CUPE) had authorized a strike in an attempt to regain some of the ground they had lost over the past ten years, when their wages increased at only half the rate of inflation. CUPE members, who make on average $39,000 (Canadian) per year, are the lowest-paid workers in Ontario’s schools.

Ford’s legislation not only declared the strike illegal, including fines of $4,000 per day for each individual striker, it imposed a four-year contract with annual wage increases of 2.5 percent for the lowest-paid workers and 1.5 percent for all others — well below the current rate of inflation.

As CUPE members began their strike on Friday, Unifor National President Lana Payne declared that “This is an unprecedented attack against workers’ rights and trade union freedoms, and what you’re going to see is an unprecedented response.” On Sunday, Unifor’s Automotive Council and Independent Parts Suppliers Council, which represent 40,000 autoworkers throughout the province, wrote to Premier Ford demanding a repeal of the bill, and announcing that they “will be exploring all options in the coming days to respond to these actions.”

After the provincial government committed in writing to repealing the bill and resuming negotiations, CUPE announced on Monday they would suspend their strike action. Mark Hancock, the union’s national president, told the CBC that CUPE members “took on the Ford government, and the government blinked. We’ve shown that when under attack, our movement is strong and we will stand up for each other.”

Canadian workers (including public-sector workers) are guaranteed the right to strike by the Canadian Charter of Rights and Freedoms, a part of their constitution. In order to pass their anti-strike legislation, the Ford government invoked the so-called “notwithstanding clause,” which allows provincial governments to suspend rights guaranteed by the charter, with no judicial review, for up to five years. It is a provision designed to be used “only in most unusual and extenuating circumstances,” according to Wally Oppal, a justice in British Columbia.

“If fundamental rights can be taken away from public-sector workers without recourse, no one’s rights are safe,” said Payne following the announcement of the bill’s withdrawal. “Workers made it clear that they will not tolerate the weaponizing of the notwithstanding clause to strip away our Charter rights. Not today, not tomorrow, not ever.”