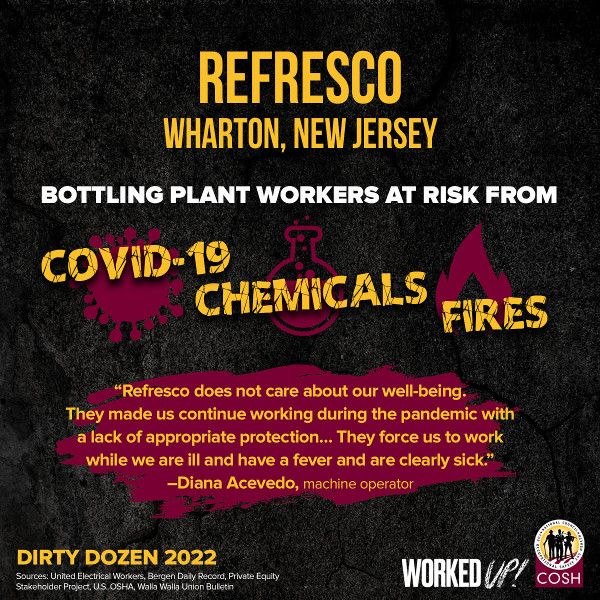 Refresco’s New Jersey bottling plant has earned the dubious distinction of being selected as one of 2022’s “Dirty Dozen,” an annual list of unsafe employers who put workers, families and communities at risk.

The “award” came as no surprise to the workers in the plant.

“Our health and safety is not a priority here,” said Lida Guevara, a quality technician in the laboratory. “During the worst of the pandemic, they refused to listen to us. They made us come in to work and many workers got seriously ill.

“Many of my co-workers have gotten injured here at the plant. The company does not ensure proper protections and makes us carry the workload of two or three workers each. That results in accidents and people getting injured. And, to top it off, our health insurance plan is so bad that we are afraid of getting sick or having to go to the doctor to get treated.”

When the COVID-19 pandemic hit, Refresco refused to provide workers with personal protective equipment and maintained a punitive attendance policy that penalized workers who needed to quarantine.

Refresco workers fought for their safety, organizing an open letter, marching on the boss, and at one point shutting down the whole second shift. In June 2021 they voted to join UE in a National Labor Relations Board election, forming UE Local 115. In November 2021 they filed a complaint with the Occupational Safety and Health Administration reporting fires at the plant, standing pools of chemical water, and noise hazards resulting in hearing loss. OSHA is currently investigating this complaint.

The “Dirty Dozen” selection came as workers at the plant are confronting another setback in their struggle for a safe workplace: after over nine months of delays and frivolous legal appeals by the company, the NLRB recently threw out the results of their union election.

That decision, based on the NLRB itself opening the voting five minutes late — a minor error that UE conclusively demonstrated had no effect on the election outcome — means that workers must once again endure a barrage of union-busting. The company has installed TV screens in the plant to tell workers that they should vote NO, and managers are spreading lies about union dues and initiation fees and interrogating workers one-on-one or in small group settings to determine where they stand on the union.

“Once again, we are being subjected to a misinformation and pressure campaign by Refresco management,” said Refresco worker Carlos Cardona. “We won our union election fair and square last year but Refresco's lawyers, led by a guy who worked at the NLRB for 20 years, then objected to the results because the NLRB agent opened the voting center up five minutes late while waiting for the interpreter to arrive.

“The company couldn't provide a single witness to testify under oath that they hadn't been able to vote because of that minor delay,” continued Cardona. “Despite that, the NLRB ultimately ordered a new election and now Refresco is once again lying to workers so that they vote against the union and against our own interests.”

“The decision by the labor board to throw out Refresco workers’ election victory shows that our country’s labor laws are just as broken as our health and safety laws,” said UE Director of Organization Mark Meinster. “Until our government takes workers’ rights to organize and to a safe and healthy workplace seriously, the only recourse that workers have is to unite and engage in aggressive struggle to compel their employers to respect their rights.”

“We won't be beat because we have truth and justice on our side,” concluded Cardona, “but our experience here shows that, just like Refresco, the whole NLRB process is broken and in need of drastic changes.”

The Dirty Dozen list is published every year by the National Council for Occupational Safety and Health and released the week of Workers’ Memorial Day (April 28). The full report is available on their website (in both English and Spanish) at nationalcosh.org/The_Dirty_Dozen.