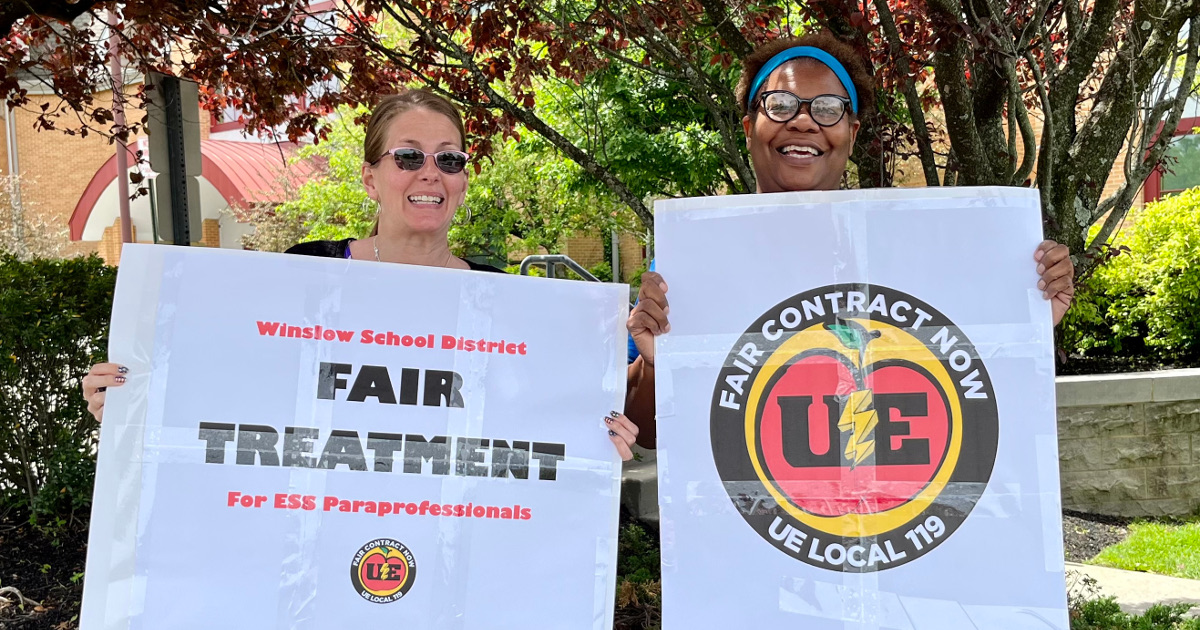 On May 18, the membership of UE Local 119 ratified their second UE contract with education contractor ESS. The one-year agreement builds on the gains of their first contract with a new paid holiday, paid training, more protections against discipline and discharge, and stronger job posting language.

Local 119 members work in the Winslow township schools as one-on-one aides, teacher assistants, bus aides, and before & after school program attendants, but they are employed by — and bargain with — ESS, a for-profit contractor. This makes negotiations more complicated than for most UE locals, as the board of education holds the ultimate purse strings.

As during negotiations for their first contract, UE members reached out to members of the board of education and parents, and Local 119 President Heather James spoke at a board meeting. The local had announced their intention to hold a rally outside the May 18 board meeting, but cancelled it that morning when the company came up with enough money to settle a one-year deal acceptable to the membership.

The new contract raises wages by three percent and adds Good Friday as an additional holiday. (Prior to their first contract, ESS workers had no paid time off whatsoever.) It provides for paid training on diversity, bloodborne pathogens safety, crisis prevention intervention, and CPR/first aid — another major priority for ESS workers, whose jobs often put them in positions of having to keep themselves and the children they work with safe.

Another major priority for ESS workers, since they organized, has been a fair system for job posting. In addition to wanting the ability to bid on other jobs, workers sought relief from the company’s practice of reassigning them without warning. The first contract included job posting language, but the local had to take the company to arbitration to enforce it. Between their successful arbitration award and stronger language in the new contract, Local 119 members are hopeful that this issue will finally be addressed.

Information on New Jersey’s paid sick leave law, which requires employers to provide up to 40 hours of earned sick leave per year, will now be incorporated into the contract as an appendix, to make sure workers are aware of their rights under the law.

Prior to this contract, disciplinary records never expired; now they will be inactive and not considered in further progressive discipline after two school years. The contract clarifies that incident reports issued by the school district are not discipline (although the employer has the option to use them as evidence in discipline). It also adds new language requiring that employees who are found to be under the influence of alcohol or drugs at work be offered a drug or alcohol rehabilitation program as an option for their first offense.

In order to address issues stemming from school district decisions, the contract establishes a quarterly labor-management meeting to discuss non-economic items, with the company committing to prioritize up to two issues per quarter to discuss with the school district.

The new contract also expands the categories of relationships covered by bereavement leave to include cousins, aunts, uncles, nieces, nephews, and household members.