UE Participants at Labor Notes: “The Labor Movement Is Surging” 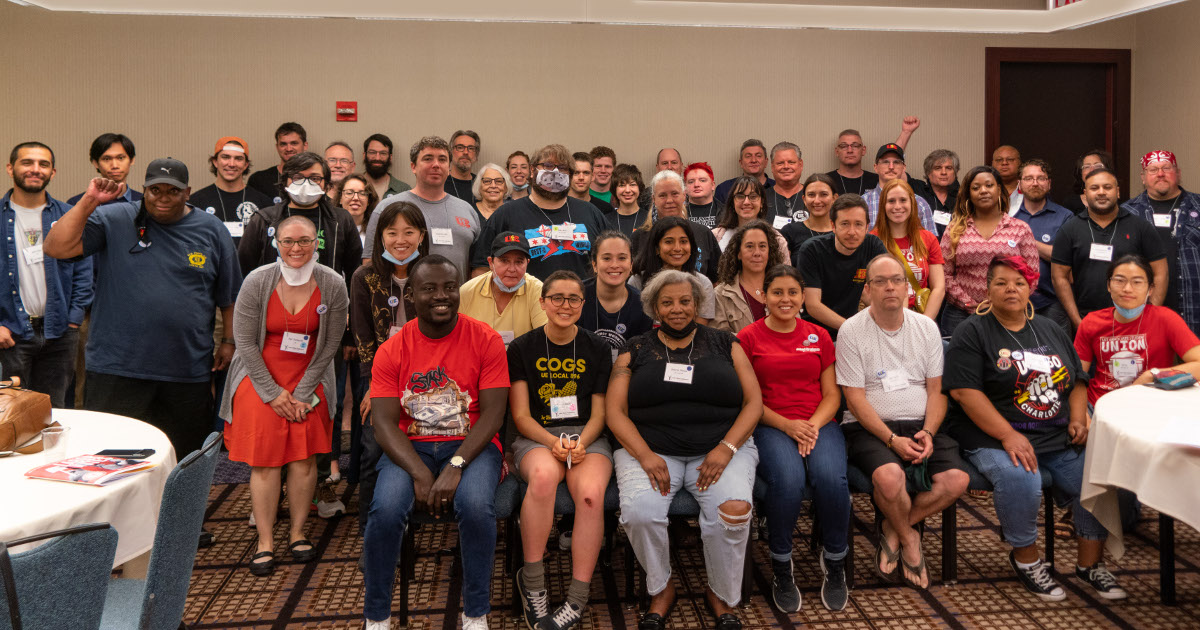 For the first time since 2018, labor activists from around the country and even some international guests gathered for the Labor Notes Conference in Chicago. More than 60 UE activists were among the conference’s largest crowd yet of 4,000 participants. For many UE members, this was their first in-person union event outside their home local since the COVID-19 pandemic.

Labor Notes is a monthly magazine dedicated to providing ideas for unions to build power at work, especially through mobilizing members. Their three-day conference, which usually happens every two years, featured exciting keynote speakers, topical workshops and discussion panels, and opportunities for workers to network with others in their field.

UE members, officers, staff and retirees showcased the union’s perspective on a wide range of subjects. They participated in eight conference panels, on everything from organizing in the South to community coalition building. Others facilitated five different workshops during the conference, ranging from bringing the fight for Medicare for All into the workplace to addressing climate change by fighting for good jobs.

Director of Organization Mark Meinster was on one of the conference’s featured panels, “Labor’s Upsurge: How Unions can Make the Most of this Moment,” along with worker organizers from campaigns at Amazon and Starbucks. (Watch a recording of this discussion here.) Meinster noted that we won’t really be able to tell if this moment of activism is the start of an upsurge while we’re in the middle of it, and the important thing we can do right now is make the most of the enthusiasm that exists to make real gains for the working class. The way we will do that, he said, is to encourage workers to be the organizers, not rely on paid union staff. Fred Hatef, Local 1008, attended this panel and said, “Hearing from new Starbucks and Amazon organizers, from experienced organizers discussing the new surge of organizing, and being a part of an energetic crowd filled the air with hope that the labor movement is surging, and the motivation to do our part in making sure that it does.” 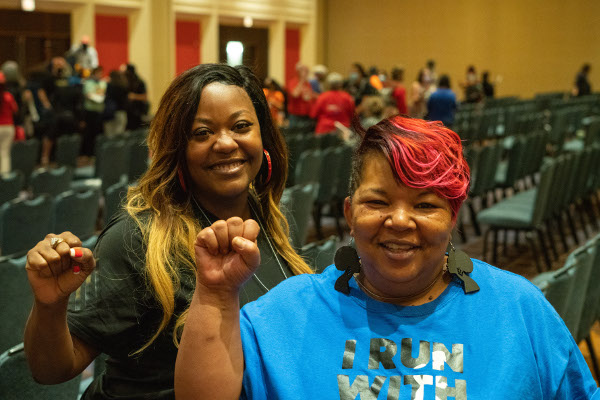 Nichel Dunlap-Thompson, Local 150, co-facilitated UE’s “Building Solidarity for Racial Justice” workshop with UE Director of Education Kari Thompson. After the conference, Dunlap-Thompson shared she left the event feeling energized and empowered by the experiences there.

Zack Sutter, Local 1186, attended a wide variety of workshops and panels on everything from grievance handling to queer-trans labor histories. He reported that he was excited to incorporate ideas from the conference at home in Madison, including how to talk about getting “strike ready” with coworkers. 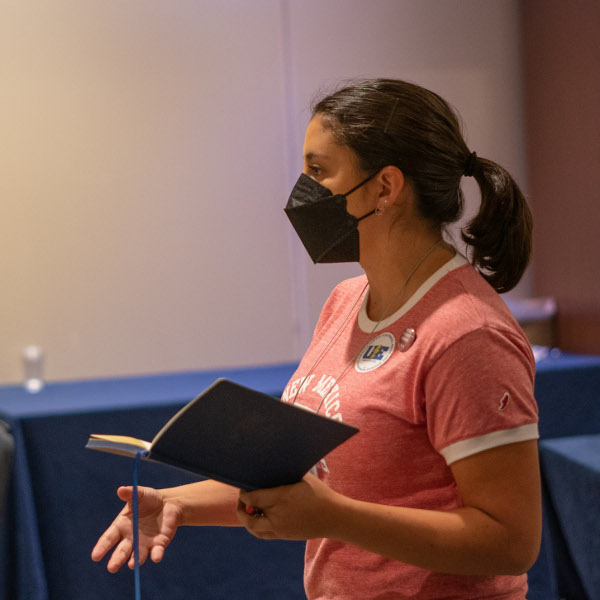 Above: Ramona Malczynski, Local 1466, speaking at a workshop on graduate workers. Below: UE food co-op workers. 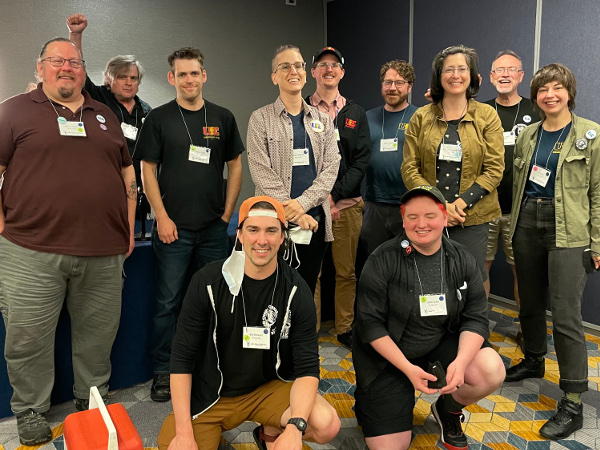 With so many UE members in attendance, UE organized meetups for workers from two well-represented groups at the conference: food co-ops and graduate workers. Ramona Malczynski from Local 1466, which represents graduate workers at the University of New Mexico, said the grad worker lunch was one of the most useful experiences over the weekend. She also took away great ideas about building a contract action team to support organizing during negotiations.

“This was my first experience with Labor Notes and one of the ways that I can describe it is a beautiful eclectic mix of international solidarity and camaraderie,” said Sekia Royall, Local 150. “The trainings that I participated in were very impactful and helped me understand the work that we do. My favorite training was the celebration and history around Juneteenth.”

UE also connected with international allies while at the conference. General President Carl Rosen arranged a special meeting for representatives from Zenroren in Japan with leaders from the Chicago Teachers’ Union. Zenroren Secretary General Koichi Kurosawa and Deputy Secretary General Keisuke Fuse led their group, which included Yasuko Sasamoto from Zenkyo, the All Japan Teachers’ Union, and Yumi Yamamoto, a professor of education. UE representatives also interacted with leaders from the Confédération des Syndicats Nationaux from Quebec, and from other unions in Mexico, Canada, Hong Kong and New Zealand.

Videos from the conference main sessions and a few other select programs are available at labornotes.org/2022/06/videos-2022-labor-notes-conference.