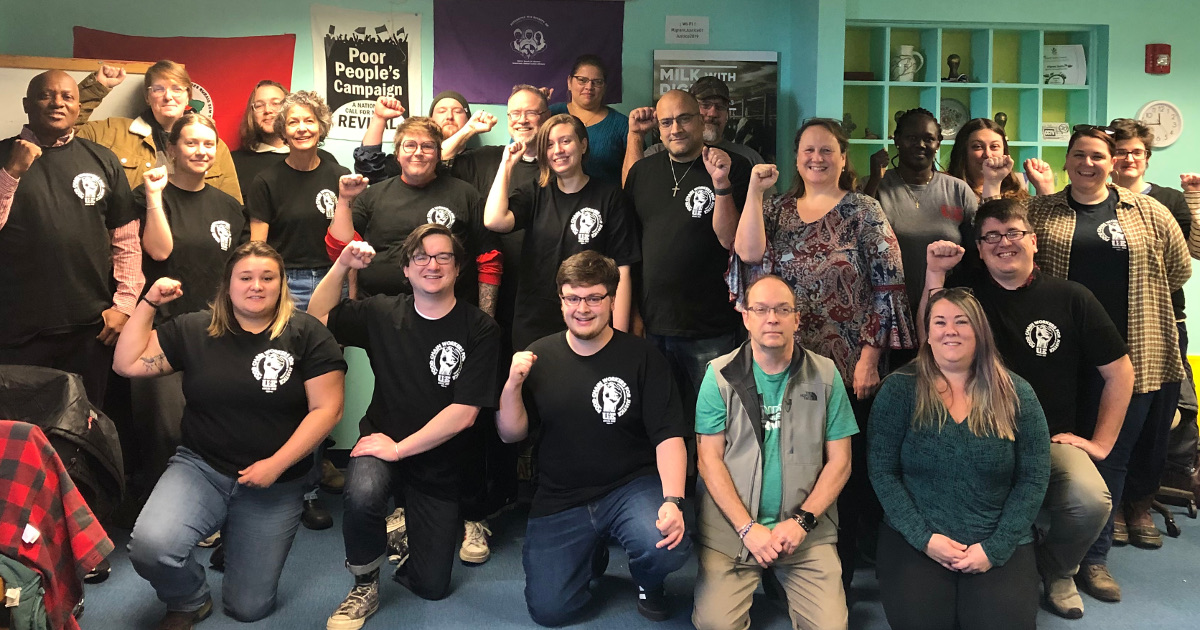 Over twenty stewards and officers from five Vermont UE locals and six shops gathered at the Vermont Workers’ Center for a two-day steward training on December 8 and 9.

“The steward’s training provided me with ample information, tools, and contextual examples to equip me and better prepare me for representing and aiding my colleagues, going forward,” said Ryan Southworth, a Local 203 steward at City Market in Burlington.

Topics covered included just cause, breaking down what grievances are, organizing around grievances, handling investigatory and disciplinary meetings, investigating grievances and writing step one grievances. Locals also compared the grievance procedures from their different contracts and how they set up their steward systems.

“Training alongside other locals was a tangible reminder that while each of our shops might be different, and while the specific content of our struggles may vary, our purpose for being organized is the same,” said Local 203 Chief Steward Keaton Knowles.

Local 221 President Em Hammond, who works at the Champlain Valley Office of Economic Opportunity (CVOEO), also appreciated the participation of multiple locals. “Being able to network with other stewards in my state and hear their stories, experience, and opinions will be vital in my ability to support and advocate for my fellow members in the future,” she said.

Participants discussed the work that stewards do and should be doing in the shop and why people choose to become (and to continue to serve as) stewards. Members took turns role-playing how to be assertive when dealing with management and how to be supportive of the workers they’re representing.

Jeff Hatin, a Local 267 steward at the University of Vermont, praised the training as “a good starting place for everyone that they can build on.”

“I liked the training and was able to learn a lot of information that I can bring back to my local,” said Lex Lawson, a Local 234 steward at Fairbanks Scales in St. Johnsbury. “Spending two days learning and meeting other locals made me realize that I want to get even more involved within my own shop.”

“Not only did I learn more about the union but also what it does to help our members,” said Laurie Murray, a Local 221 steward at CVOEO.

The two days also included education on UE and the history and importance of labor unions.

“Two days seemed like a lot beforehand,” said Local 203 President John Donoghue, “but it gave us the opportunity to time to really engage with the materials in context that would have been difficult with such a large group in a shorter time.” Donoghue added that he was “super excited” for new stewards in his local to engage with their membership following the training.

“I hope we get the opportunity to do it again next year!” said Local 221’s Hammond.