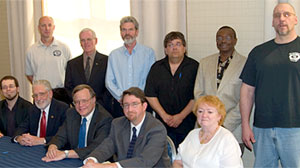 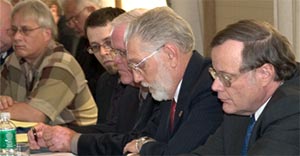 The main business of Thursdays session was a presentation on health insurance and other GE health programs by Ginny Proestakes, GEs Health Care Program Leader, and the unions response. The presentation dealt mainly with cost trends in the companys health care coverage for both active employees and retirees, but also gave a clearer indication of what the company aims to achieve in negotiations.

"REASONABLE" OUT  "COMPETITIVE" IN

The company presentation had barely begun when UE-GE Conference Board Secretary Steve Tormey asked his first pointed question. An introductory slide identifying the companys five main goals for its medical plans ended with these words: "Achieve Competitive Levels of Cost Sharing." Tormey noted that in the past, the company had always used the phrase, "reasonable levels of cost sharing." He asked company representatives to explain the significance of this change in wording. When their answers were not very responsive, Tormey offered his opinion. The word "competitive" is so overused by GE and other companies that it has become essentially meaningless, he said, but in this case he suspected its use indicated the companys intention to impose unreasonable levels of cost sharing on workers, with the excuse that some "competitor" had already done so. Following this interruption the company resumed its presentation  which eventually proved Tormeys point correct.

The company showed several slides intended to demonstrate that its health care costs are growing at an unacceptable pace  up 82 percent since 1999, according to one slide. But Tormey noted theres a reason why the company used 1999 as the base year and starting point in these trend lines and comparisons. The company experienced sharp increases in medical costs in 2000 and 2002, but the rate of increase has been much more moderate during the term of the current contract.

Both Tormey and UE President John Hovis reminded the company that, in 2003 negotiations, the company had predicted "double-digit increases" in its health costs every year into the future, and used that dire forecast to justify its demands to shift more health costs to employees. This year GEs "double digit" warning was replaced with the phrase "health care payments growing at two-to-three times the rate of inflation." Charts presented to the union committee on Thursday showed GEs "total spend" on health coverage  including active employees and retirees  increased 22 percent over the four-year term of the present contract. Tormey pointed out that 5.5 percent a year "is a long way from double-digit growth."

Despite GEs oft-repeated complaints about the cost of retiree health care, the companys costs for post-65 retiree coverage increased by only 11 percent from 2002 to 2006. Thats an increase of 2.75 percent a year  well below the rate of inflation. The companys presentation showed that GE received a government subsidy of $56 million to help pay for Medicare Part D prescription drug coverage for retirees starting in 2006, and this resulted in an actual reduction in the companys total 2006 spending for drug coverage, including coverage for active employees, pre-65 retirees and post-65 retirees. This federal subsidy to GE will continue, even if the company succeeds in shifting more of its costs onto workers and retirees.

One of the slides included in the presentation must have been embarrassing to the company. Above a bar graph showing the yearly increase in GE spending on active employee health care from 1999 to 2006, it listed five major "cost drivers" during that period. These were inpatient, 91 percent; physician, 73 percent; outpatient surgery, 87 percent; and outpatient imaging, 352 percent. We all know who manufactures those imaging machines and aggressively markets them to doctors and hospitals; GE makes big profits from what is far and away the biggest "cost driver" in spending on employee health care.

Ms. Proestakes spoke about GEs efforts to make employees more informed consumers of health care, and mentioned instances of "overuse" and over-prescribing of some drugs, which GE tries to address through its prior authorization practices. Her comments drew responses from members of the UE committee. She attempted to preempt one anticipated criticism of GEs hypocrisy on the issue of over-prescribed drugs when she said she expected that Tormey would criticize the profits NBC makes on prescription drug advertising. Tormey did later point out that the U.S. is one of only two countries that even allows prescription drugs to be advertised, and that this is one reason why Americans pay far more for health care than any other country, while getting far less than many.

Pat Rafferty, Local 506, said that in his experience representing thousands of GE workers, the companys requirement of prior authorization for certain prescription drugs is based not on side effects, as Proestakes had suggested, but on cost. "You create an administrative nightmare for doctors to renew a prescription for a drug that youve already approved and that is still needed," said the Erie union leader. Eric Snedaker, Local 1010, also took issue with the companys position on prescription drugs, and added, "Ive never seen GE stand up before Congress and call for real health care reform."

GE came in for more criticism from the UE committee over its unwillingness to put its significant political influence behind efforts to reform the U.S. health care system  in particular, its refusal to support single-payer health insurance. Instead, GE deals with the crisis by shifting more and more of its health care costs onto the backs of employees and retirees. "Cost shifting has been proven, just in our negotiating history with GE over the past 20 years, to be a complete failure in reining in medical costs," said Steve Tormey. He added that GE comes into any discussion of the problems of the U.S. health care system "with an essential conflict of interest" because of all the money it makes on the dysfunctional profit-driven health care system. "You dont have clean hands."

John Hovis noted that GM, Ford, and Chrysler joined forces with the Canadian Auto Workers (CAW) to stop attempts to privatize Canadas health care system, because Canadas single-payer health insurance system helps the auto companies hold down costs there. When company spokesperson John Gritti implied that Canadians are dissatisfied with their health care system, Tormey responded that surveys have repeatedly shown that the U.S. health care system scores at or near the bottom, when citizens of different countries are asked how satisfied they are with their own countrys health delivery system. "We pay for national health insurance  in fact the U.S. pays twice as much as Canadians and Europeans pay for health," said Tormey  but unlike them we dont get a system that delivers affordable health care for all our citizens.

GEs slide presentation compared its employee contributions and co-pays to nine other companies, all smaller and less profitable, whom GE sometimes identifies as competitors. The company showed slides indicating the growing trend of companies dropping retiree health insurance. This led into the company pointing to some other companies that have imposed 100 percent of the cost of retiree health insurance onto the employees themselves  and GE has done the same to its salaried employees hired since 2005. At this point, Steve Tormey interjected that the company had now made it clear why they had dropped the phrase "reasonable cost sharing" in favor of "competitive cost sharing." "So competitive means the worker paying 100 percent of the cost, GE paying zero."

"Its a lot more than just a bunch of numbers," said President John Hovis. "Its 70 years of bargaining with this company by the members of this union. Its people walking the picket lines in 1946, for 102 days in 1969, and for a couple of days in 2003, to get what we have today. This is about real people."

"There are two issues that could run these negotiations into a ditch," the UE president warned the company, "new hires and health care. We fought like hell for what we have. It wasnt easy. The companys bean counters just look at the numbers, and they figure they can taketh away what they giveth. Well, they didnt give any of it willingly in the first place."