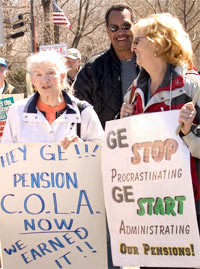 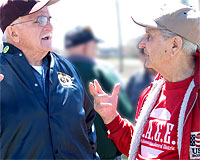 Members of the UE Local 506 Retirees' Association (RAGE) demonstrate outside of GE's Erie plant for a sorely-needed pension increase.

Members of the Retirees Association of General Electric (R.A.G.E.) demonstrated today for an increase in pensions for all GE retirees. Dozens of sign-carrying RAGE members marched — some rode in wheelchairs — from the UE Local 506 union hall to an area just across from the east gate at GE’s sprawling Erie works to press their case. They were joined by members and leaders from Locals 506 and 618, including the first-shift department stewards who marched out of the plant en masse to join the rally.

RAGE President Ron Flowers pointed out that it has been seven years since GE has adjusted the pensions of its retirees. Since the last structural increase in May 2000, consumer prices have risen by some 18 percent. Retirees have also endured increases in Medicare premiums and in their costs for optional GE medical plans. Additionally, employees who retired after June 1, 1997 have received no increases in their annual pension to date.

President John Hovis assured the retirees of the commitment of the National Union, and the UE-GE bargaining committee, to win needed improvements for retirees. UE-GE Conference Board Secretary Steve Tormey warned participants to be prepared for a fight with GE over vital benefit issues. Company executives have expressed their desire to provide only "sensible and competitive benefits" to new employees, by which they mean no retiree health benefits and no possibility of early retirement. Tormey denounced GE’s stinginess toward its currently retired former workers. "These are supposed to be your ‘golden years.’ The question is, ‘where’s the gold?’"

'We Are Your Legacy'

Tormey pointed out that GE dismisses its obligations to retirees as "legacy costs" that add no value to the company. "Your legacy is that you made this the most successful corporation in the world," said Tormey. "They complain that people live longer than they used to. Isn’t that inconvenient for the company?"

Local 506 President Frank Fusco also responded to the company’s "legacy cost" rhetoric. "Your legacy is us – the people working in the plant today. Our legacy is the future employees." Fusco emphasized the commitment of the union to fight for all three generations – past, present and future GE workers.

Local 618 President Lynda Leech told retirees that they are entitled to respect, and to live in comfort, for all they have done to build GE. Flowers closed by urging the retirees to turn out in force at the upcoming Contract Rally in Erie, scheduled for Saturday, June 2, and closed the rally by leading the crowd in a chant expressing their determination to achieve significant pension improvements in 2007: "This is the year!"